In its dotage, the lumbering National Cloak and Suit Co. facility at the corner of Independence and Hardesty avenues served as a dusty storage facility.

So it is fitting that Jonathan Arnold would put massive energy “storage” — revolutionary battery technology that will push us toward a renewable power future — into his housing plans for the site.

Also in Arnold’s blueprints, the 12-story building and four warehouse buildings that flank it will be bristling with more than 2 megawatts of solar power. The leading edge energy technology will give technological sizzle to an area of the city that has been hibernating for decades.

Arnold, fast becoming an international star in sustainable housing development, this spring announced plans to invest $120 million to transform the century-old complex into 352 apartments with a healthy inventory of affordable housing on the 18-acre site.

Just a year ago, on Second and Delaware, Arnold completed one of the most energy efficient apartment complexes in the world, reducing energy demand by 70% to 90% beyond city code requirements. It cost $100 million to build that 276-unit project, built to last centuries. 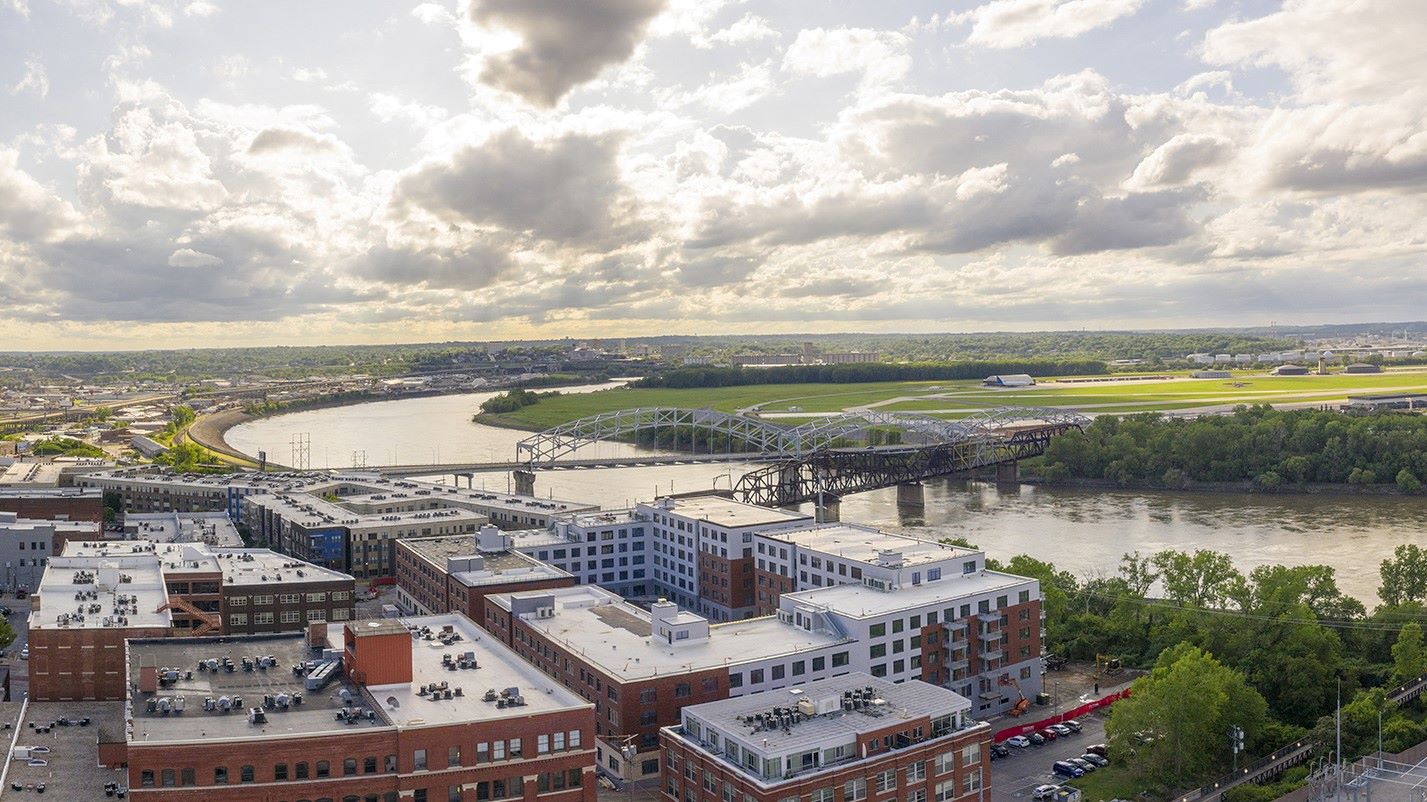 Accolades for Apartments Offer Latest Sign KC is an Emerging Energy Efficiency Mecca One of the most energy efficient apartment complexes in the world is at Second and Delaware streets in Kansas City. It’s getting more attention as the world combats climate change. 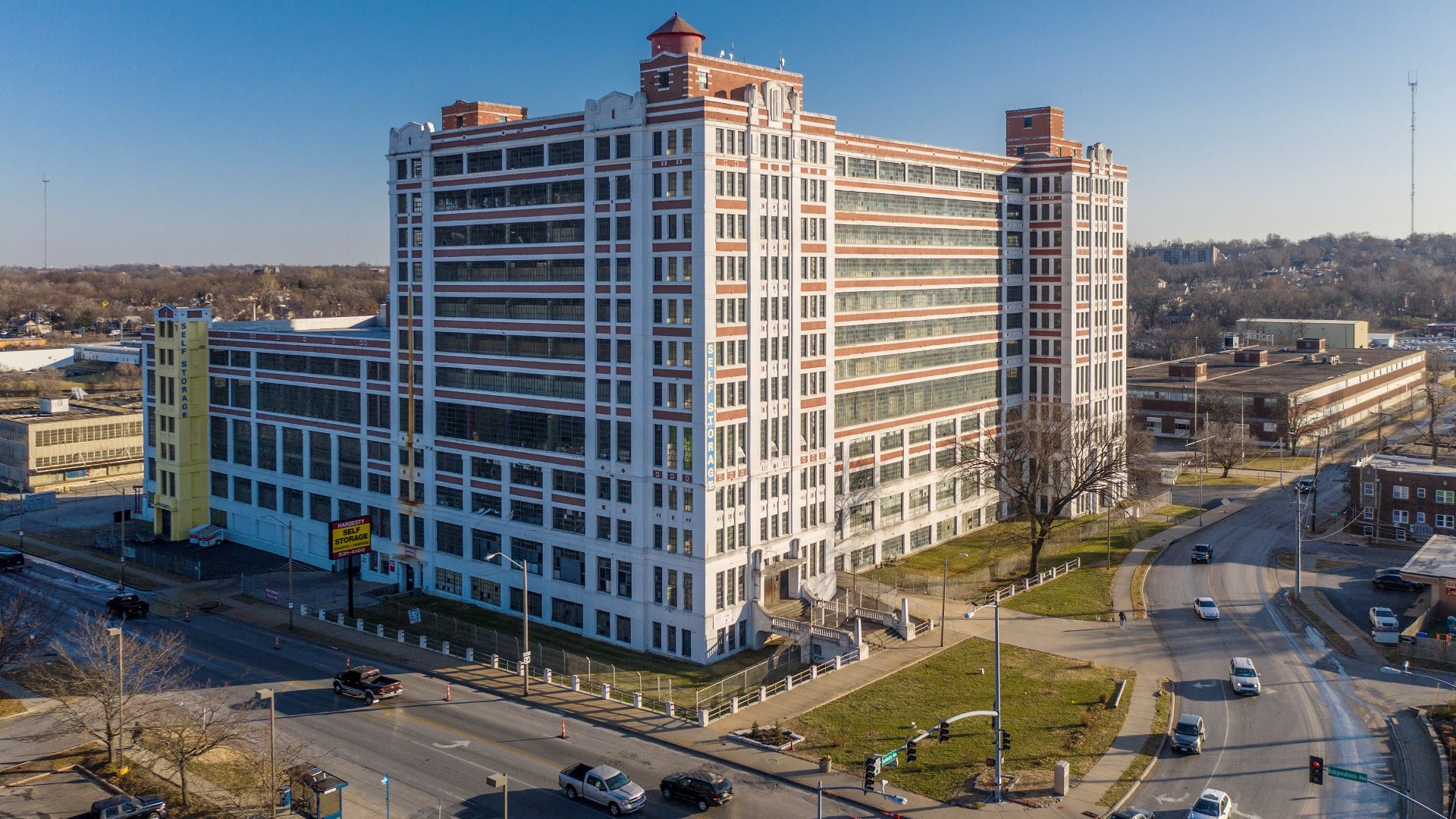 For the Independence and Hardesty housing development, Arnold said he plans to generate a massive 1.1 megawatts of rooftop solar power plus an additional 1.24 megawatts on the ground.

That is a total of more than 2.3 megawatts, about eight times the amount of power generated in the River Market project. Even though the solar generation will be huge it will not totally satisfy the energy needs of the site.

Arnold is just beginning to research the amount of energy storage to deploy.

For massive amounts of solar and wind energy to enter our electric grid, battery storage will be key, soaking up excess power when demand is slack and offloading it to users when the sun is down or the wind slackens.

Some utilities like Portland General Electric have been studying energy storage since 2013 in its Salem Smart Power Center, which featured a 5 megawatt lithium-ion. battery.

Others, like local Evergy, say they are just beginning the journey.

Gina Penzig, an Evergy external relations manager, wrote in an email that with energy storage, “we evaluate the cost-benefit of storage as part of meeting customers’ needs.”

She continued: “The costs are becoming more attractive, but it’s not yet an economic solution. A 1-megawatt battery was recently put into service in Wichita. The Switchgrass Battery Storage Pilot Project is Evergy’s first lithium-ion battery on our power grid. The battery’s 1 megawatt of power can be available to the Southwest Power Pool market or, in cases of emergency, provide backup to the Sedgwick County Zoo during any unplanned, prolonged outages.”

According to federal government projections, Arnold and Evergy might be jumping into energy storage at just the right time, with storage capacity nationally poised for a 10-fold leap.

“Electric power markets in the United States are undergoing significant structural change that we believe, based on planning data we collect, will result in the installation of the ability of large-scale battery storage to contribute 10,000 megawatts to the grid between 2021 and 2023 — 10 times the capacity in 2019,” according to a report by the U.S Energy Information Administration (EIA).

The trend is inexorable. This summer, EIA reported that battery storage capacity tripled in 2021 with more than 100 utility scale projects completed last year.

Black & Veatch engineers and planners in Overland Park are closely watching the trend.

Chris Rogge, an engineering specialist with the firm, said that with multifamily housing, providing solar power and energy storage to all units “gets tricky.”

Referring to photovoltaics (solar), BESS (battery energy storage systems) and EVs (electric vehicles), he said: “An ideal situation for PV/BESS/EV at multifamily sites would be to have a single utility meter and point of interconnection to power the site, and allow private metering of apartment units, or include it in the rent.  It is highly inefficient … to design, interconnect, and maintain 200 micro-systems (think 6-8 solar panels for each apartment unit) than it would be to have a single 500-kilowatt system.”

Arnold is committed to being an energy pioneer as he takes his sustainable housing projects to a new level of energy sophistication, being among the first developers to incorporate energy storage along with solar power for affordable residences.

His Independence and Hardesty project, like his Second + Delaware complex, will command widespread attention for Kansas City and focus on the role of batteries and energy storage.

“We do project a very large role for energy storage,” said Paul Denholm, a senior energy analyst with the National Renewable Energy Laboratory in Golden, Colorado.

Utilities will use storage in a variety of ways.

“Most utilities are seeing large battery storage as now cost competitive with peaking power plants,” he said. “Now storage will beat that on a lifecycle cost basis.”

Rather than burning fossil fuels to meet load on extremely hot or cold days, utilities might be more willing to tap into batteries juiced by renewable energy.

For consumers, “people’s bills might not go up as much as otherwise,” Denholm said.

The technology of large battery storage is also ripe for breakthroughs. That is because most stationary batteries rely on the battery designs that have served the large and fast-growing electric vehicle market.

“Why should that be? Stationary batteries can be bigger, heavier and use chemistry that costs less,” Denholm said.

Rogge said, “There is a fortune to be made if you find a solution that is better.”

Meanwhile, Evergy is gearing up for a new world of more distributed electric generating resources that is around the corner.

The utility is interested in “real-time data and insight into how this technology integrates with, and supports, sustainable grid functionality and reliability,” Penzig said.

“Future projects like this can also help us understand customer preference and usage patterns to complement other programs such as time of use rates, decarbonization goals, and electrification initiatives,” she said.

Martin Rosenberg is a Kansas City journalist and host of the Grid Talk podcast on the future of energy.