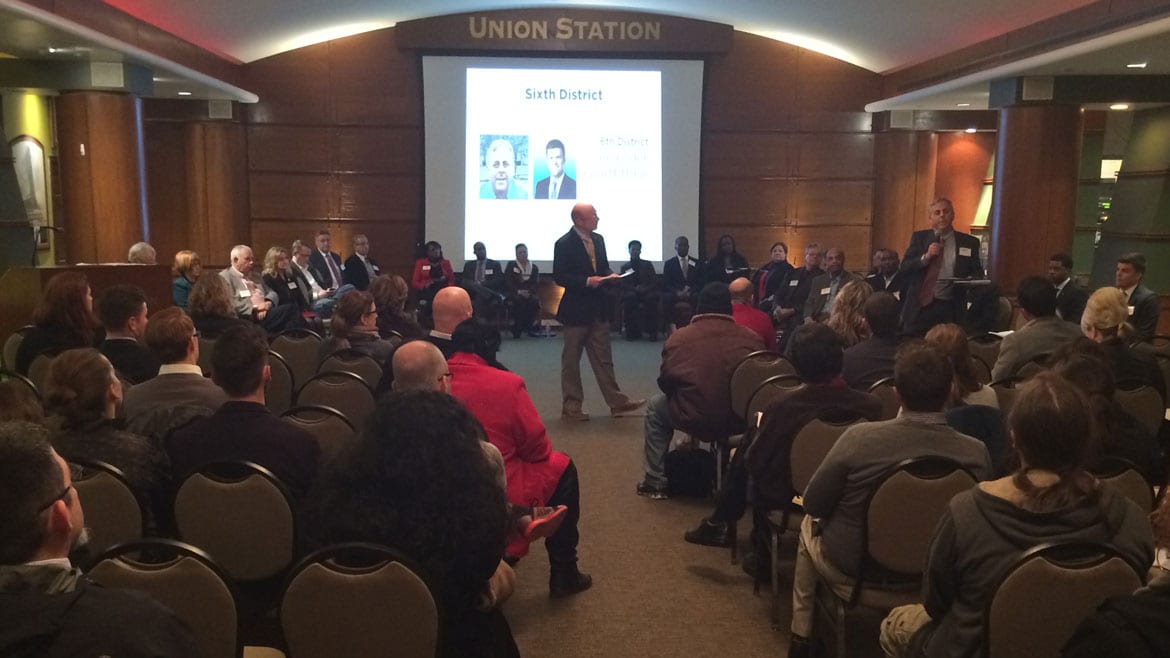 How do we close the digital divide? How do we become a gigabit city? How do we attract and keep tech talent in Kansas City? These questions and more were discussed last week at KC Digital Drive’s Civic Tech Forum at Union Station.

KC Digital Drive is an organization that grew out of the Mayors’ Bistate Innovation Team and is focused on using new technologies to make positive civic outcomes. The forum was moderated by KCPT’s Nick Haines.

Although there were nearly 30 candidates vying for just one microphone, two major themes emerged: improving digital access and attracting tech talent to the city.

Haines opened the forum by citing a statistic that 1 in 4 Kansas Citians does not have internet access. For Jermaine Reed, the incumbent candidate in the 3rd district, this is a huge issue. He said the city needs help bring access to the entire city, especially low-income areas.

“The city does have a role to play in making sure that we do have internet access for everyone in our entire city, and certainly east of Troost,” he said.

But one thing preventing widespread access, especially in low-income neighborhoods, is the cost. Even for Google Fiber’s free internet service, customers have to pay an initial $300 construction fee to have it installed.

Bryan Dial, 3rd district candidate, pointed out that many people in his district simply can’t afford to pay that fee.

“So we’ve got to be able to be fiscally responsible and find both public and private dollars to pay the fees that are associated with access to the internet,” he said.

Making Kansas City into America’s most entrepreneurial city, which is one of the city’s Big 5 initiatives, was a topic many of the candidates touched on. But becoming a hub for entrepreneurship will require loads of talented tech workers.

Katheryn Shields is running for the 4th district at-large council seat. She said part of the solution is to focus on educating people who already live here.

“I think half of it is training the young people we already have here so that they’re the tech-savvy individuals who can get those jobs,” she said. “But also we have to create a wonderful, liveable city.”

Jolie Justus, former state senator, is also running in the fourth district. She said outreach is the key to finding the best people in tech.

“We have got to get better at going out across the country and getting people to come to Kansas City, and this should be financed by private industry, should go out to all of the civic tech forums in all the other cities and start recruiting people,” she said.

The city council election will be held on April 7.

Celebrating, Bemoaning the passage of time