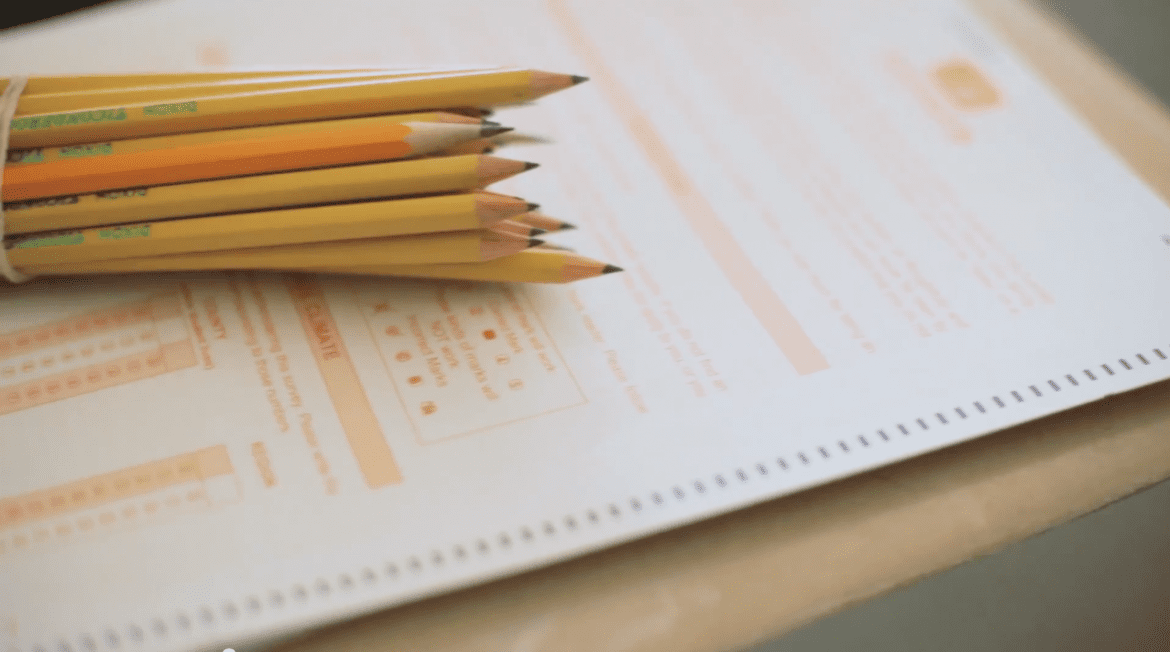 The Kansas Communities That Care (KCTC) survey, which was taken by nearly 100,000 sixth-, eighth-, 10th- and 12th-grade students last year, is expected to have an estimated 60,000 fewer responses this year. (Photo: Southeast Kansas Education Service Center)
Share this story

For more than 20 years, Kansas secondary students have taken a survey to track alcohol and drug abuse. But a new law requiring parents to give written permission to allow their children to take the survey is affecting the survey data, and those who use it say it could be more challenging to obtain funds for prevention efforts.

The Kansas Communities That Care (KCTC) survey, which was taken by nearly 100,000 sixth-, eighth-, 10th and 12th-grade students last year, is expected to have an estimated 60,000 fewer responses this year, according to officials at the Southeast Kansas Education Service Center at Greenbush.

Lisa Chaney, director of research and evaluation at the Southeast Kansas Education Service Center, said that’s a preliminary estimate because students are still taking the survey. The final count will be shown in a participation percentage at the end of May.

“While many things are still unknown, we do know that there will not be comparable state-level data,” Chaney said about the survey, which has been conducted since 1995.

“Without that information, it’s going to be more difficult, certainly at a local level, to monitor or to assist with planning and providing evidence-based strategies for prevention.”

Last year the Legislature passed Senate Bill 367 based on privacy concerns related to the Common Core State Standards. The bill set limits on what information school districts could collect and share. Although students take the KCTC surveys anonymously, the new law required parents to provide written permission for any collection of data from their children on things like sex, family life, morality or religion.

Given the nature of the KCTC surveys, Michelle Voth, executive director of the Kansas Family Partnership in Topeka, called the survey “a non-issue that’s turned into an issue” now that the number of students taking it has dropped considerably.

“The bottom line is, do we want data to be able to target our highest needs?” Voth asked. “And given that this doesn’t put any child’s answers at risk for someone to know, because it’s not personally identifiable, I don’t see the problem.”

Previously, it was assumed students could take the survey, but parents were given the option to “opt out,” or request that their children not participate.

Joyce Cussimanio, a former Southeast Kansas Prevention Center director, has used KCTC survey data since its inception. She said the new law hurts schools in a time of shrinking budgets.

Two bills proposed this session, HB 2099  and SB 137, would revert to the 20-year-old process of opting out from the survey. Neither bill has advanced out of committee.

‘That data is our lifeline’

According to written testimony from the Kansas Department for Aging and Disability Services, the survey has helped communities in Kansas and state agencies receive $18 million in federal funds to address prevention efforts for youths.

Reno County is one of three communities in the state to receive a Drug-Free Communities Support Program grant.

Sondra Borth, executive director of Reno County Communities That Care, said KCTC survey data is essential in keeping the five-year, $625,000 grant and renewing it for up to 10 years. The group is in its second year of funding.

“That data is our lifeline,” Borth said. In addition, Reno County receives funding from a state grant, two local grants and through donations.

With the KCTC data, Borth said it’s easy to report to state and local officials about which risky behaviors are affecting their community and where prevention efforts need to occur.

Borth and others say the data show where dollars and prevention efforts should be focused based on risk behaviors. Without that information, they say it will be more challenging to plan strategic prevention services.

One Reno County school district now won’t participate in the survey because it’s too hard to track down permission slips from children whose parents want them to take the test, Borth said.

The KCTC survey has been conducted and assessed at no cost to school districts since 1995. The survey is unique because it provides data at the district and even individual school level.

National surveys look at county data, but not at the district and school level. There’s no other information like this available at the local level, Chaney said.

Communities that use local KCTC data and the regional prevention centers who help them assess it across the state emphasize the importance of making data-driven decisions.

Their concern this year is that without comparable participation rates, prevention programs will end up guessing where youth are participating in risky behaviors.

“You can’t do this in this day and age,” Borth said. “You can’t be guessing. You have to have the facts.”

If the law remains the same, Borth said she is concerned that over time prevention efforts for youths will suffer, and drug and alcohol use rates will climb.

Brenda Salvati, prevention services program director at the Regional Prevention Center at Preferred Family Healthcare in Wichita, said a lack of survey data could affect the accuracy of community evaluations.

“It’s just like when you go to the doctor. Unless you get a proper diagnosis, it’s not going to address the current situation,” Salvati said. “If you don’t have good data to get the funds, then you can’t diagnose your problem properly to get the right strategy going.”

Over the years, Salvati said the organization has used KCTC data to create programs like Botvin LifeSkills and Strengthening Families that are aimed at lowering the rate of survey respondents who reported using alcohol, tobacco or marijuana within the last 30 days.

LifeSkills and Strengthening Families are being implemented in Sumner, Harvey and Reno counties, among others, Salvati said.

Across the state, information from the survey also has been used to implement strategies related to underage drinking, smoking, marijuana use and the connection between substance abuse and academic success.

Brenda Haaga, vice president of prevention services at the Central Kansas Foundation in Salina, said some communities in the area are taking this year off and continuing to use 2014 data.

Currently, community coalitions in her area are talking with legislators and encouraging them to return to the opt-out survey option.

“Without that data, communities are going to have to be creative in identifying ways to collect that, or possibly even come up with funding to have a survey that they are able to get the information,” Haaga said.

Ashley Booker is an intern for KHI News Service in Topeka, a partner in the Heartland Health Monitor team.