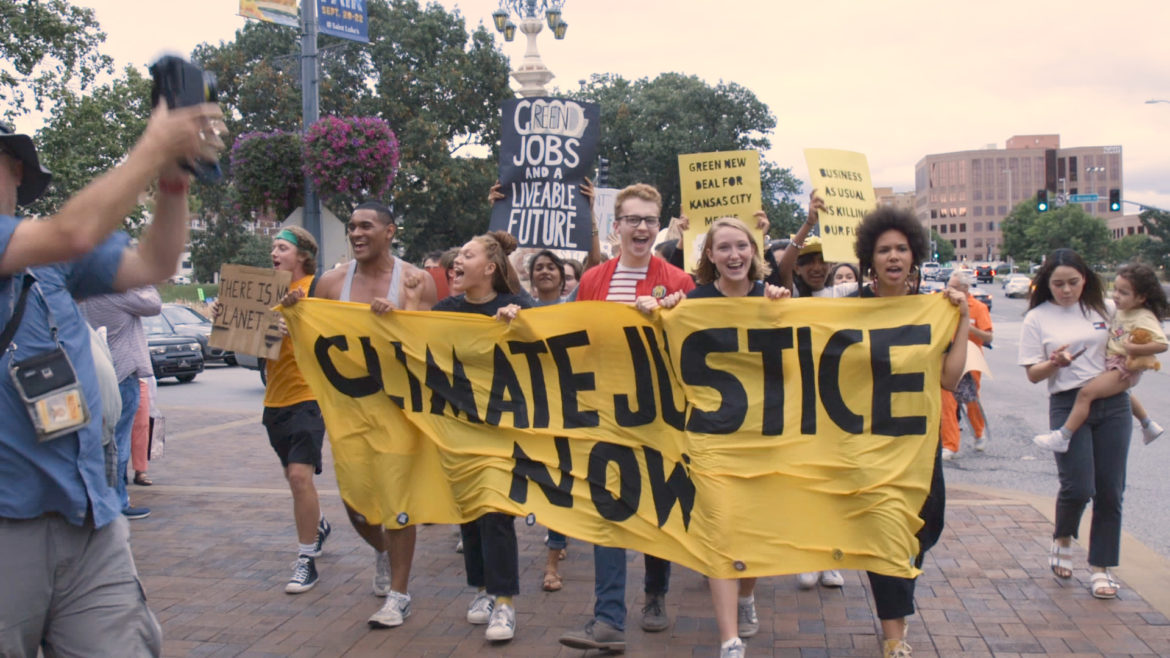 **EDIT: The text at :11 in our feature video declares the deadline needed for the elimination greenhouse gas emissions is 2012. This is an error and the correct year is 2030**

Kansas City-area activists are staging a “Climate Strike” at noon Friday on the steps of City Hall.

Led by Sunrise Movement KC, tomorrow’s action will be the latest local effort in a growing international movement to pressure governments to respond to dire warnings about climate change.

After the 2015 Paris Agreement was signed, the United Nations commissioned the Intergovernmental Panel on Climate Change (IPCC) to investigate how we could limit global warming to less than 1.5 degrees Celsius. It also was asked to forecast what the world may look like if we fail to do so.

The IPCC’s report came back in 2018 with sobering news, concluding that we are already at 1 degree Celsius in global temperature change since the mid-19th century. Moreover, it warned that we have until 2030 to radically change in order to avoid rising sea levels, increasingly severe storms, mass species extinction, devastating droughts and a host of other doomsday scenarios.

In response, an unprecedented movement of youth protesters have taken to the streets in increasingly large demonstrations around the world. To date, the largest international “Climate Strike” took place on Sept. 20, with reports of 6-7.6 million participants in 4,500 locations in 150 countries.

Kansas City joined in the international demonstrations with a student walkout and general assembly in Theis Park. The strike was primarily organized by the local hub of the Sunrise Movement, a national organization that has galvanized around a policy idea known as “The Green New Deal.” But the strike was joined by several other area organizations that are tackling the issue from different angles.

“It’s an incredibly broad topic and we need experts in a lot of different areas to solve the problems,” said Kristin Riott, executive director of Bridging The Gap.

As the IPCC report lays out,  the climate is a battle on many fronts. The demonstrations that had previously been made up of groups focused on environmental issues have been joined by other activist organizations such as KC Tenants and The SEIU Local 1.

“It is very important to us that people understand that every issue is a climate issue,” said Sunrise Movement KS Policy Advisor Michael Wolfe. “Climate change displaces lots of people so we need to have a tenants rights group to talk about the importance of affordable housing. We need people to understand that when we provide all these jobs (proposed in The Green New Deal) they need to be good paying jobs with dignity and access to collective bargaining rights.”

Flatland on Instagram:Click here to watch featurettes from some of these organizations on our IGTV.

Sunrise Movement was able to gather signatures from Mayor Quinton Lucas, Kansas City Councilman Eric Bunch, and Overland Park Councilman Logan Healy for a commitment to back Green New Deal legislation and to reject contributions from fossil fuel companies. Congressman Emanuel Cleaver made an appearance at the strike but declined to sign the agreement.

While “organizing the unorganized” is the main objective of Sunrise Movement, the hub is also very conscious about the importance of including the voices of racially and ethnically diverse communities as well as low income communities as they are predicted to be most affected by the climate crisis.

“For the strike on the 20th, we started our first efforts for reaching out to schools in areas that have been redlined and segregated,” said Sunrise trainer and recruiter Khiana Harris. “We’re going to start doing canvassing in those neighborhoods as we’re working on drafting a Green New Deal for Kansas City. We need to know what’s going to work for them and issues that they care about where they live.”