The changing dynamics of Kansans and coverage 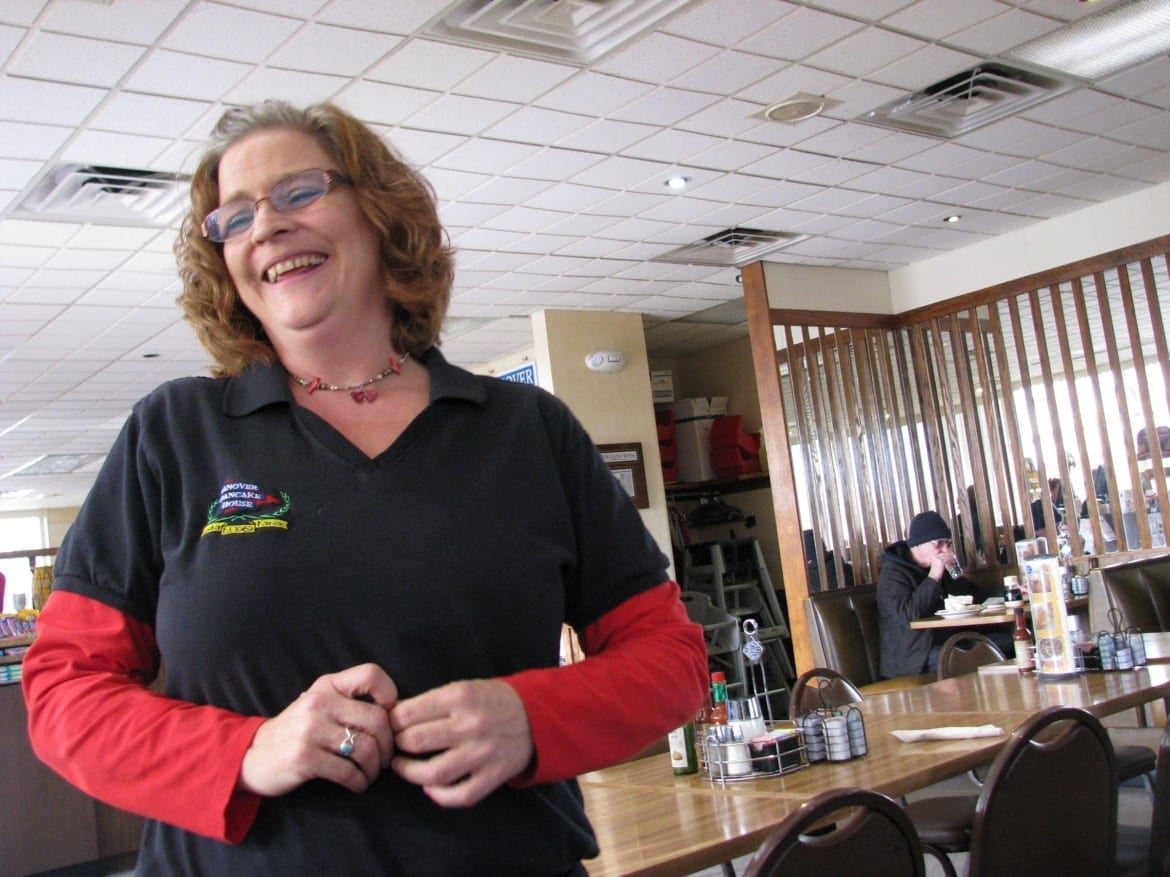 Sherry Calderwood, a waitress at a Topeka breakfast spot frequented by legislators and lobbyists, didn't buy insurance through the Obamacare marketplace last year but did this year. (Photo: Jim McLean/Heartland Health Monitor)
Share this story

It’s probably similar to those that could be told by many of the nearly 100,000 Kansans who have so far purchased coverage in the Affordable Care Act marketplace known as healthcare.gov.

Calderwood looked into signing up for an Obamacare plan during the first enrollment period but concluded she and her husband couldn’t afford it.

She regretted the decision just a few months later when a difficult-to-diagnose illness that doctors initially feared might be leukemia sapped her energy and forced her to endure tests and hospitalizations she couldn’t afford.

“I thought, ‘Oh well, I haven’t been sick in all these years, I’ll be fine,” she said, looking back on the decision. “And here I sit. I’m worried about my house, my car payments, my family.”

Calderwood, 45, is a waitress at a popular Topeka breakfast and lunch spot just a few blocks from the Kansas Statehouse. Her husband is a construction worker whose hours fluctuate with the seasons.

When the second enrollment period opened in November 2014, the couple signed up for an Obamacare plan. The federal tax credits their income qualified them for made it affordable, Calderwood said.

“It’s great,” she said. “They’re covering my bills. I’m not racking up hundreds of thousands of dollars worth of medical bills anymore.”

Calderwood’s new policy covered most of the cost of a recent surgery to remove her spleen. But she said it was the process of getting her post-surgery prescriptions filled that convinced her husband of the policy’s value. Not used to having coverage, he forgot to mention it to the pharmacist and ended up paying full price — $140 in cash.

Calderwood said she worried she wouldn’t be able to pay the water bill until she realized what had happened. When she went back to the pharmacy with her new insurance card, she said, the pharmacist refunded her money and she only had to pay $10 for the prescriptions.

Prior to the Affordable Care Act, it would have been virtually impossible for Calderwood to purchase affordable coverage because of her pre-existing health problems. Denying coverage to sick people was one of the ways that insurance companies managed their risk.

Not surprisingly, a significant number of Kansans who purchased Obamacare coverage in the initial enrollment period were older and less healthy than the general population, said Matt All, a senior vice president for Blue Cross and Blue Shield of Kansas, the state’s largest health insurer.

If the trend continues, many expect it will drive up the cost of health insurance premiums. But that hasn’t happened yet. The average premium for all 82 plans offered in the Kansas Obamacare marketplace increased just 0.1 percent from the first enrollment period to the second, which is open through April 30 for certain groups.

The newly covered Kansans are different in other ways as well, All said. Because it’s the first time many of them have had insurance, they’re having to learn how to use it.

“So, they have different kinds of questions, more basic questions than what we’re used to,” he said.

Debbie Berndsen oversees a network of navigators across the state who are trained to help people shop for coverage. She said as consumers new to the insurance market learn about deductibles, copays and provider networks, they’re becoming more selective.

“A lot of those people were coming back this year after living with those plans,” Berndsen said. “I see a trend looking more at what your coverage will be versus what the premium will be.”