Jack L. Colwell challenged some deeply held beliefs within the police officers seated before him.

His concepts, a new approach to policing, often countered fellow officers’ definitions of integrity, courage and what keeps them safe and able to return to their families after a shift.

Colwell once was a trainer at the Kansas City’s Regional Police Academy. He helped lead a leadership program, a class that was open to all officers in the department.

In 2008 he began trying something new, passing out a paper that he’d written titled “Unleashing the Power of Respect.”

The paper’s premise is that police departments had become beholden to short-sighted attitudes and myopic training practices dating back to the 1970s. One portion of the eight-page report read:

“Many law enforcement members have been taught a feigned or manufactured respect in dealing with each other and members of the public. The member is allowed (and by implication encouraged) to entertain all kinds of demeaning stereotyped attitudes about each other and members of the community as long as the words and behaviors they present are professional and efficient.”

The response from both officers and commanders was swift and negative. It also proved true to behavior within systems that are struggling to change.

People, he said, are adept at picking out aspects of their experiences to justify actions. Police are no different.

“One seasoned veteran said my crazy ideas would ruin policing,” Colwell recently wrote in an email. “He longed for the ‘good ole days’ when cops would always cover (lie and perjure) for one another to cover up everything from cowardice to brutality to on-duty drunkenness.”

But the ideas that Colwell professed were intriguing to then-Capt. Charles “Chip” Huth, who led a specialized squad within the Kansas City department.

Huth’s idea was to develop Colwell’s theories into a book. In 2010, the men co-authored “Unleashing the Power of Unconditional Respect; Transforming Law Enforcement and Police Training.”

The book, and the concepts that both men have continued developing, align with what many in Kansas City say they want from the police department going forward: Trust and a level of respect that leads to community perspectives being acted upon.

Such goals are under a spotlight now as the Kansas City Board of Police Commissioners recruits a new chief of police to replace retiring Rick Smith.

Bishop Mark Tolbert, the president of the Police Board of Commissioners, said that he does not want the search for a new chief to be rushed. A year is not too long, he said.

Tolbert said that the initial request for proposals for an executive search firm drew only one response. It’s being rewritten and will be sent out again, seeking a wider array of respondents, he said.

A series of recent community listening sessions has generated lists of what transparency, accountability and community engagement should look like within the police department.

Tolbert also emphasized that the community listening sessions will matter.

“We have a great opportunity before us,” he said at a listening session on Saturday.

Fulfilling that promise — to truly respond to a community — is at the heart of unconditional respect.

But it takes a profound shift in focus for people to truly begin listening to what others with different perspectives are saying, said Colwell, who retired in 2010 after 29 years with the department.

Colwell continued the leadership class, infusing training with the perspective that unconditional respect for the public and other officers is the prerequisite for effective communication, which in turn is a prerequisite for trust.

A lot of what fueled pushback from officers was a subconscious conviction that any change or deviation from the norm endangers officers’ lives and well-being, Colwell said. He argues the opposite is true, that a more aware officer is more engaged, less likely to miss important cues.

Huth retired as a major from KCPD in December. Both men now train others, including many in law enforcement, through the Arbinger Institute, a global firm, with principles that have also now been worked into Colwell’s original concepts.

Law enforcement converts to their theories were found along the way. Many former and current Kansas City police officers have been through the training and have embraced the approach, which sounds simple on the outset, but requires consciousness in how officers would approach every interaction.

Huth has a TED talk and a podcast. And multiple Arbinger training videos of the approach have been produced, many featuring the stories of Kansas City police officers who have embraced the project.

Colwell said that as people retired, including former Chief of Police Jim Corwin, new leadership came into place with their own priorities for leadership programs. The Unconditional Respect program eventually ended its formal sessions at the academy.

And the trainers only had access to the entire organizational culture indirectly through training. They could not adapt all leadership processes, strategies, operations and tactics to the Unconditional Respect model, he said.

Broken trust is often at the core of what the department’s critics find lacking.

Reverends Darron Edwards and Emanuel Cleaver III said that initially they wanted to work with Smith and others in the department to find solutions to community problems. It was the impetus around a clergy-police response called “Getting To The Heart Of The Matter.”

But the effort fractured, the men said, when KCPD lied to them about the facts in a police fatal shooting of Malcolm Johnson, who was killed by police in a shooting in 2021. The police narrative of what happened was contradicted by a video that a community member gave to the clergy group.

Structural change is needed in the department, both men said, especially to drive out racism within the department. Racism is seen as the epitome of disrespect by many who have come to the listening sessions.

Carolyn Robinson, who attended a community listening session Saturday at the Bruce R. Watkins Cultural Center, said that many African Americans don’t always feel empowered to speak out. Part of it, she said, was because they don’t feel that their voices will matter.

Others deemed the process a “dog and pony show,” saying that the new chief will be chosen not from characteristics that the community finds worthy, but as someone the police and the board deem a good leader.

Even those who are generally less critical want more attention from the police, promptly and courteously, even when they have a complaint.

Colwell pointed out that the Office of Community Complaints often is not deemed responsive enough because the process seems to be too drawn out to satisfy the concerns of many residents.

And police often think that doing it any other way could impede internal affairs work.

But one successful model that’s been done elsewhere involves getting immediate feedback via a survey from police/community interactions like a call for service, like 911.

Citizens are asked how satisfied they were with the outcome. Police sometimes don’t realize that even in solving an issue from their perspective, they might have missed the mark from the community’s perspective, Colwell said.

In one Arbinger training video, an Indianapolis police officer said, “If you are a hammer, everything is a nail.”

Mayor Quinton Lucas listened to a group of clergy on Monday, gathered at the steps leading into police department headquarters. Speaking individually, some in the group pressed for a U.S. Department of Justice investigation into the police department.

Others were adamant that the new chief be hired from outside of Kansas City.

Lucas, who as mayor also serves as a member of the Board of Police Commissioners, arrived to listen. But he said that he wants to encourage the public to continue speaking out, long after the listening sessions and the eventual hiring of a new chief.

“I hope the interest and effort that we are seeing now is sustained after we hire a new chief of police,” Lucas said. “When there is no public voice, that’s when the status quo continues.” 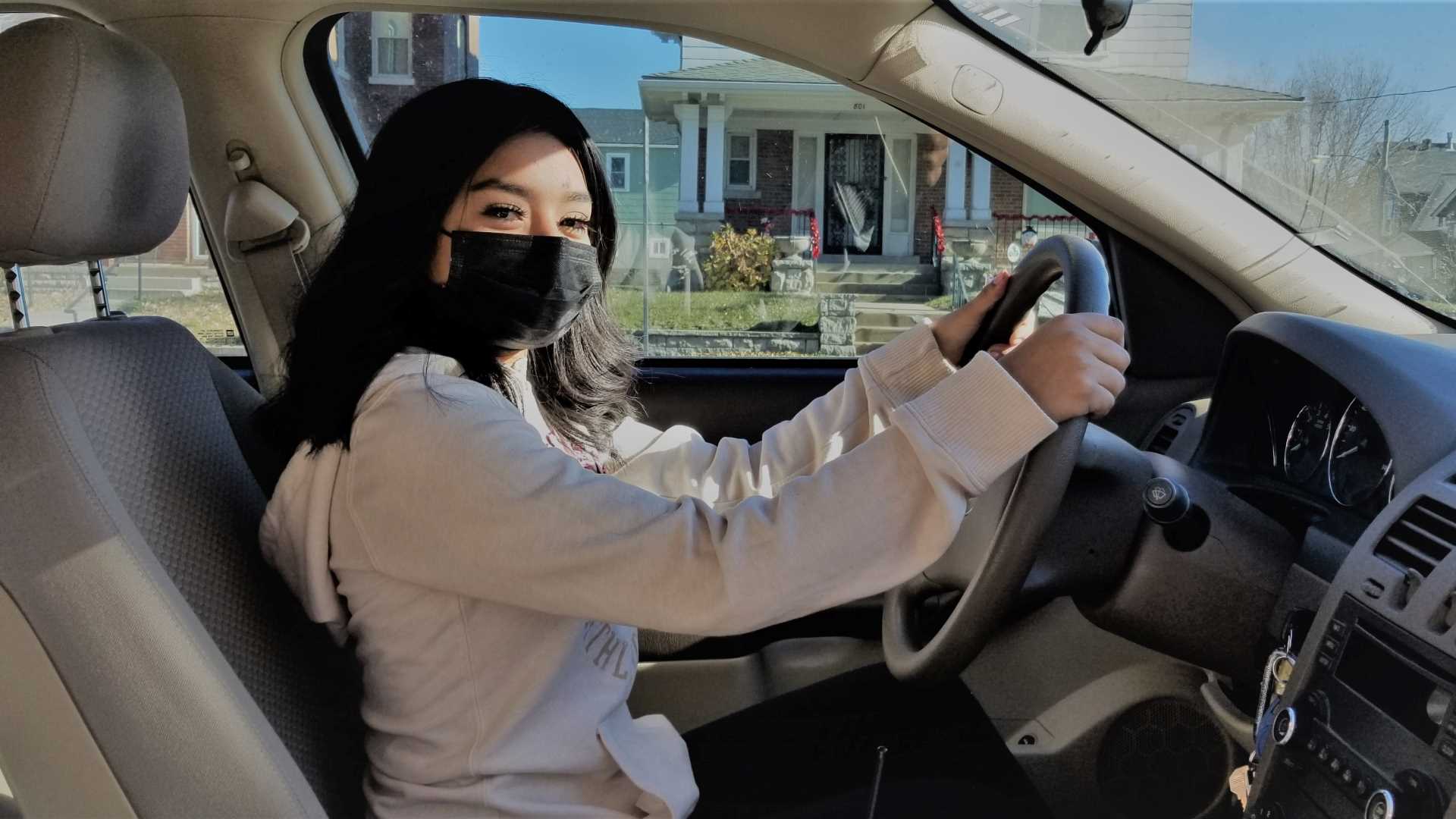 Getting Unlicensed Drivers Off the Road … By Helping Them Get Licenses Kansas City, Kansas, police have created what might be the nation’s first police-run driver training school to help get unlicensed drivers off the streets.