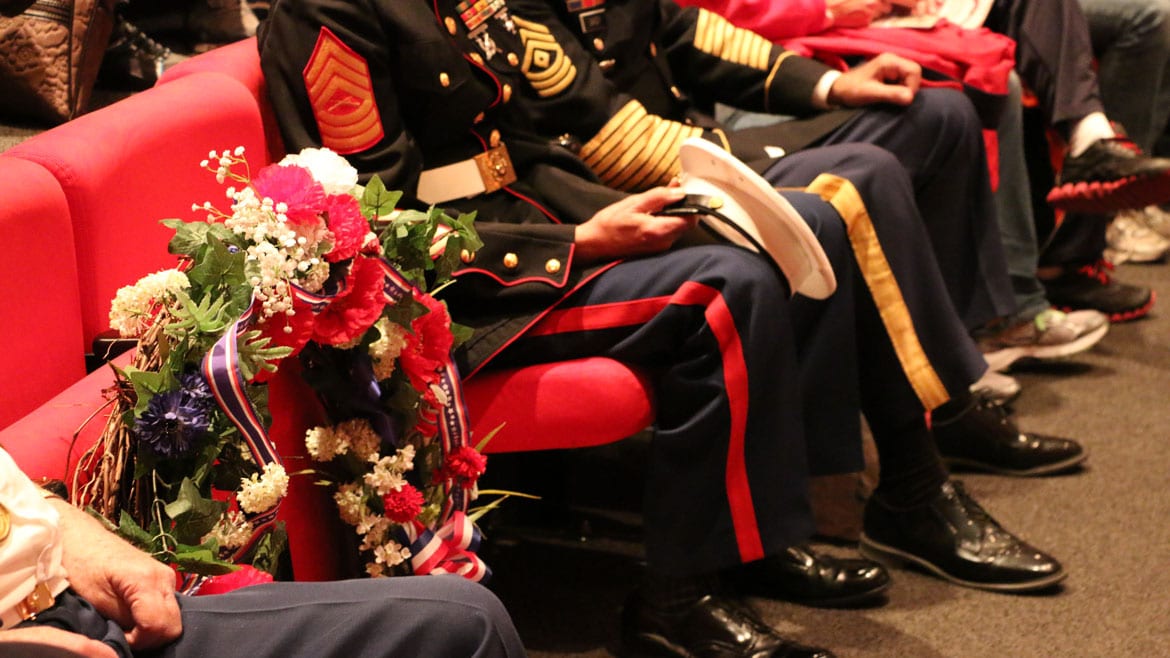 A patriotic wreath waits to be placed on an empty chair meant to honor the POWs and MIAs that could not be part of this Veterans Day celebration. (photo by Caitlin Cress/Hale Center for Journalism)
Share this story 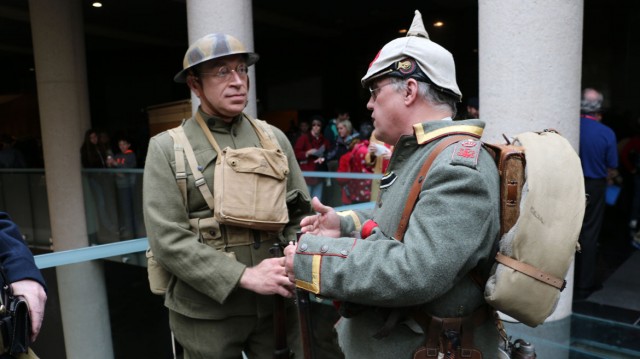 Living history interpreters Charles Pautler (left) and Bruce Enlow are dressed as an American soldier and an early-war German soldier. Russian, British and French soldiers were also represented this morning at the WWI museum. (photo by Caitlin Cress/Hale Center for Journalism)

Kansas City’s National World War I Museum is currently celebrating the centennial of the duration of “the Great War,” so today’s Veterans Day took on special significance. Veterans Day was originally “Armistice Day” and celebrated the end of WWI.

McCaskill spoke first, detailing the history of the National Anthem and thanking veterans.

“It’s not enough just to do this on Veterans Day,” she said. “We have to do this every day of the year.”

The ceremony was punctuated by music from the American Legion Band & Chorus, including a performance of the Armed Forces Medley. The conductor asked veterans in the audience to stand when their branch’s song was played. Veterans proudly stood, some smiling and relaxed and some somber and at attention. Those in the somber category included Mayor James, who served in the Marines.

James said he is a Marine, he is the father of a Marine and the son of a Marine. He said he knows the service from all angles: as a service member, being worried about by a parent and worrying about a child. He closed his remarks with the Marines’ call of “oorah!” Many in the audience called back.

Thomas Butch, the chair of the museum’s Board of Trustees, also spoke of familial ties to Veterans Day. He told brief stories of his father and grandfather, but conceded that “theirs are not unique stories.”

Butch went on to applaud McCaskill and Cleaver for sponsoring a bill that, if made law, will make the Liberty Memorial the national WWI memorial. A similar bill made the museum the national WWI museum in 2004.

Thanks to a grant from the Jackson County Executive and the Jackson County Legislature, admission to the museum is free today. Visitors throughout the day can view the exhibits, attend a lecture from this morning’s keynote speaker and visit with living history interpreters. A full list of events is here.

The interpreters are men like Charles Pautler, who is dressed as an American soldier would have dressed during WWI. Pautler and Bruce Enlow, a fellow interpreter, posed with visitors for photos and answered questions throughout the morning.

The living history interpreters are typically at the museum on the second Sunday of each month, but they made a special appearance today. Pautler said this was an important opportunity to interact with guests.

“People connect with other people like themselves, and when they see somebody … who’s dressed in the uniform with all the stuff that he would carry on the battlefield, they tend to put a name and a face and then sympathize with the soldier,” he said.

“All the photos you see are black and white,” Pautler said. “Today we’re offering a color glimpse. They were real people just like us.”