Keeping the Pressure On, His Memory Alive 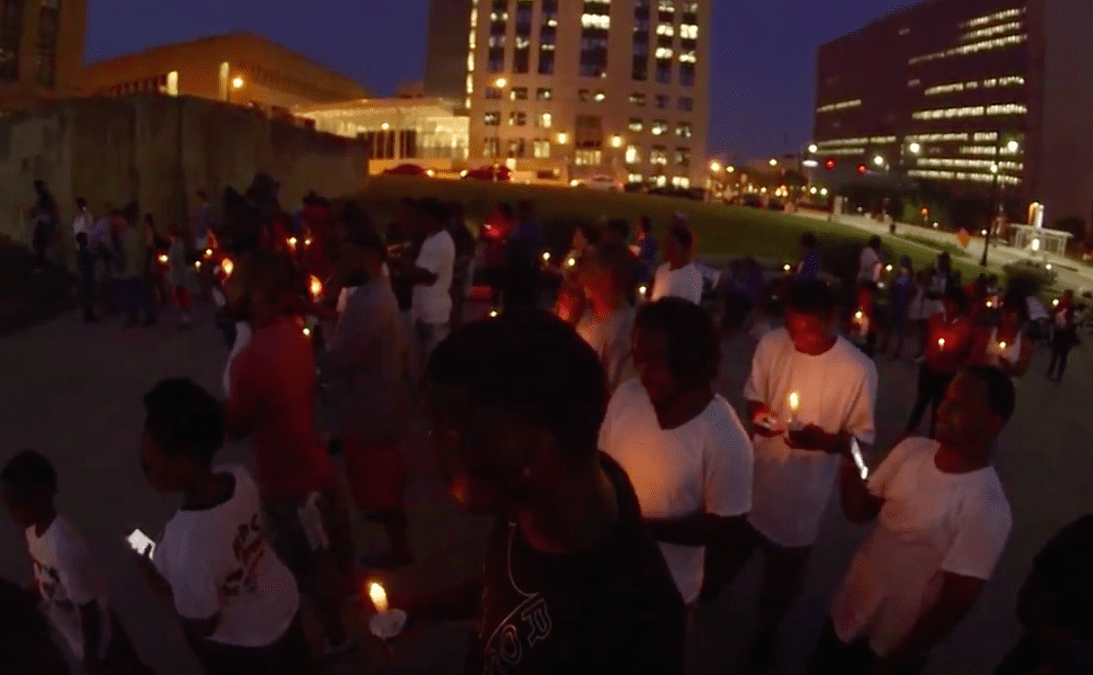 Friends and family of Ryan Stokes hold a candlelight vigil on the steps of city hall last July in honor of the second anniversary of Stokes' death. (Photo: Daniel Boothe | Flatland)
Share this story

The family of a man shot to death by Kansas City police three years ago has filed a wrongful death suit against the department, alleging that its policies were to blame for an incident that quickly spun out of control.

The suit, filed Thursday in the U.S. District Court for the Western District of Missouri, alleges that the department’s governing board had “inadequate internal accountability measures (that) contributed to a pattern and practice of excessive force by KCPD, including the officers involved in the shooting death of Ryan Stokes.”

The suit, which seeks unspecified damages, was filed by attorneys representing the mother and daughter of Stokes, who was shot by Officer William Thompson in a parking lot near the Power & Light District in downtown Kansas City. The suit was filed on the three-year anniversary of the incident.

A spokeswoman for the mayor, who is a member of the Kansas City Board of Police Commissioners, was not immediately available for comment Friday, nor was board President Michael Rader.

Thompson shot Stokes in the early morning hours of July 28, 2013, after police officers had pursued Stokes and a friend as they went to retrieve a vehicle from the parking lot. Thompson was about 10 feet behind Stokes when he shot him.

Police accounts said that Stokes appeared to have a gun and refused commands to drop the weapon, though it turned out he was unarmed. He had been pursued as a suspect in a case of an allegedly stolen iPhone.

Thompson’s account said that he found a semi-automatic pistol with live rounds in the front seat of the car that Stokes had started to enter. The suit says that, in Thompson’s account, he claimed that Stokes must have dropped the gun in the seat when he partially opened, but then closed, the door to the car he was going to get.

A Jackson County grand jury found the shooting to be justified, and Thompson earned a commendation from the police department for ending a threat.

Timeline | The Shooting of Ryan Stokes

One aim of the lawsuit is to assist Stokes’ 4-year-old daughter, Neriah, and to clear his name from what the family believes is a false narrative that police have painted of the 24-year-old Kansas City man, said Brian McCallister, one of the attorneys representing the plaintiffs.

But, he also said they hope the suit will force some policy changes at the police department.

For one, McCallister said, it is unclear if the department even has a foot chase policy. In this case, a foot chase seemed unwarranted, he said, since Stokes and his friend were complying with a disperse order from police to a crowd involved in a shoving match.

“You don’t just draw a gun when you see a black man running to his car – and that is what Ryan was doing,” McCallister said.

The suit also alleges that a policy of putting desk officers like Thompson on duty in potentially volatile situations, such as bar-closing time at the Power & Light District, contributed to a chain of events that concluded with a “tragedy of monumental magnitude.”

McCallister also hoped that the suit bolsters community efforts for an independent investigation of police shootings.

Stokes is remembered by friends and family as a fun, church-going father who never owned a gun. He even played basketball in a league sponsored by the KCPD, which added an ironic twist to his death.

Official reports about the shooting of Ryan Stokes raise more questions than answers. Here’s why

Supporters of the effort include 1 Struggle KC. The group recreated the events of the shooting in a video they posted on YouTube.

Stokes’ mother Narene Stokes-James said that while she is thankful for all the community support, she is disturbed by the lack of awareness of the story in the Kansas City community.

“I find it hard that people are more worried about what happened in other states rather than what has happened here.” James said. “When Ferguson happened, it made me think, ‘Well, did you know that Ryan was killed in the same manner? Why isn’t Kansas City more aware of that?”

— Daniel Boothe is a reporter for Flatland. To reach Boothe, email him at dboothe@kcpt.org.

—Mike Sherry is Online News Editor for Flatland. To reach Sherry, email him at msherry@kcpt.org