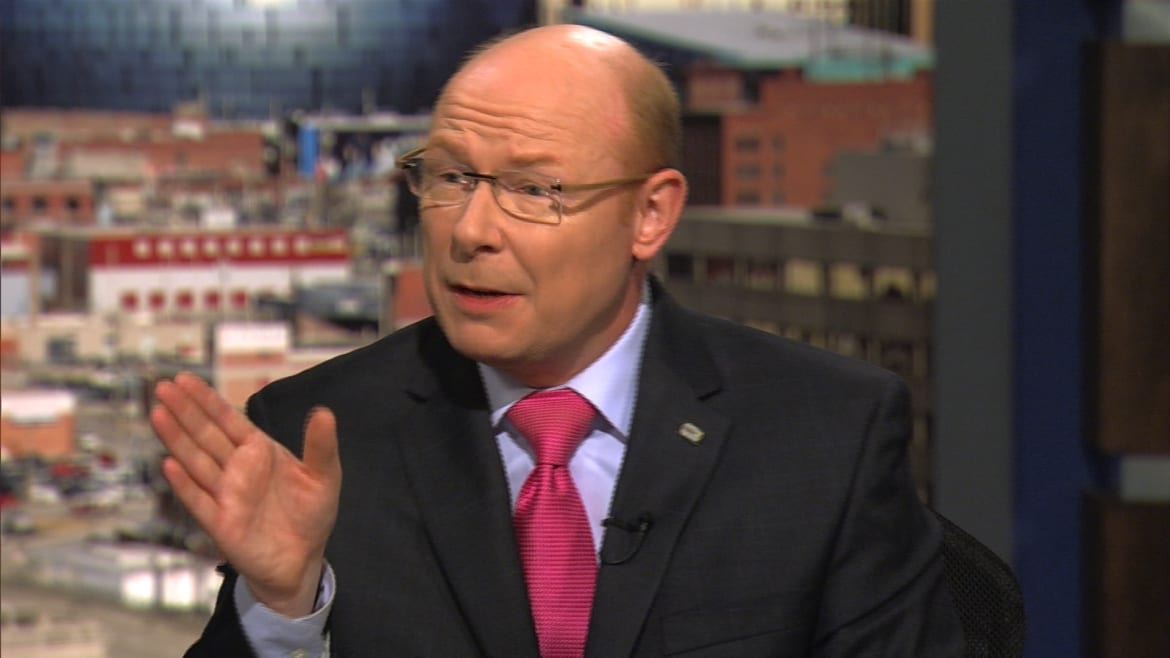 An FBI probe into the activities of top advisers to Kansas Governor Sam Brownback tops our look at the week’s news.

According to a breaking story in the Topeka Capital Journal, federal agents have spent months investigating influence peddling including behind the scenes financial arrangements related to Brownback’s privatization of the state’s $3 billion Medicaid program. We examine what’s at stake.

Kansas City’s Ford plant makes national news this week as it begins production on the brand new Ford transit van. It’s part of a $1.1 billion investment the automaker has made at the Claycomo plant. Ford is banking on the new vehicle transforming its commercial product line.

Missouri Governor Jay Nixon told assembly line workers that approval of the auto bill that provided $100 million in tax breaks for the Claycomo plant over 10 years was the highlight and proudest moment of his time in office.

It was a synagogue for more than forty years before Congregation Beth Shalom moved to Johnson County. But plans by one of Kansas City’s largest engineering firms to demolish the property are causing controversy.

Is giving more than $41 million in tax breaks to one of Kansas City’s most financially successful companies a good use of TIF incentives, particularly as Burns and McDonnell is using the tax break to build an addition next to its world headquarters on Ward Parkway?

Kansas City Mayor Sly James and his St. Louis counterpart, Mayor Francis Slay joined forces this week in Jefferson City to oppose what they described as “senseless gun legislation.” Or, to put it more bluntly, a proposal Mayor James called “absurd, embarrassing and dangerous for the state’s two largest cities.”

The bill the Mayor was talking about would nullify federal gun laws in Missouri and allow Missourians to sue federal agents who they believe infringed on their gun rights. Another version of the bill would bar those agents from future service in any state or local law enforcement agency. The two Mayors got lots of attention for their colorful rhetoric, but did they change any lawmaker’s minds?

There is, in many states, a growing divide between Washington and state governments.  So much so, that some political observers have a name for it– “soft secession.” And few states have done more to distance themselves from the federal government than Kansas.

In fact, just last week Kansas Governor Sam Brownback signed a bill that could separate the state from the federal government’s oversight of Medicare and Medicaid. But that is just the latest example, as KCPT’s Special Correspondent Sam Zeff discovered.

Once a vibrant mall, it’s been largely desolate for the last decade. And no one has figured out what to do with it. Indian Springs Mall in Kansas City, KS certainly has a very visible location along I-635 and many people pass it on their way to the airport.

This week, its future lies in the hands of Lane 4, the local real estate firm which has been picked by Wyandotte County government to dream up something new for the 700,000 square foot enclosed shopping center. We examine the possibilities.

Kansas City Zoo officials say they’ve come up with a fix for combating violence and overcrowding on those free days set aside for Jackson and Clay County residents. The zoo will mail a postcard to every household with a coupon allowing them to pick when to come during a weekday in July, September and November.

The change is a response to gunfire and fighting that marred the last free day in March when a crush of about 19,000 people proved too much. Similar problems arose on a free day last year.

They helped design the winter Olympics stadium in Sochi and the Olympics stadium in London. Now Kansas City based sports architecture firm Populous is pulling up stakes at its longtime home downtown and heading for the Plaza. They’re moving into the Board of Trade building along with its 240 employees.

But interestingly, according to the Kansas City Star, Populous’s departure continues a big exodus of private jobs from downtown. Between 2001 and 2011, the area from Crown Center to the River Market lost more than 16,000 jobs, a 19.6% drop despite all the billions of dollars in improvements.

We may not have mountains or oceans. But we are now officially home to the world’s tallest water slide. It may have a funny name, but Verrückt, at the Shlitterbahn water park in Kansas City, KS is certified this week by the Guinness Book of World Records.