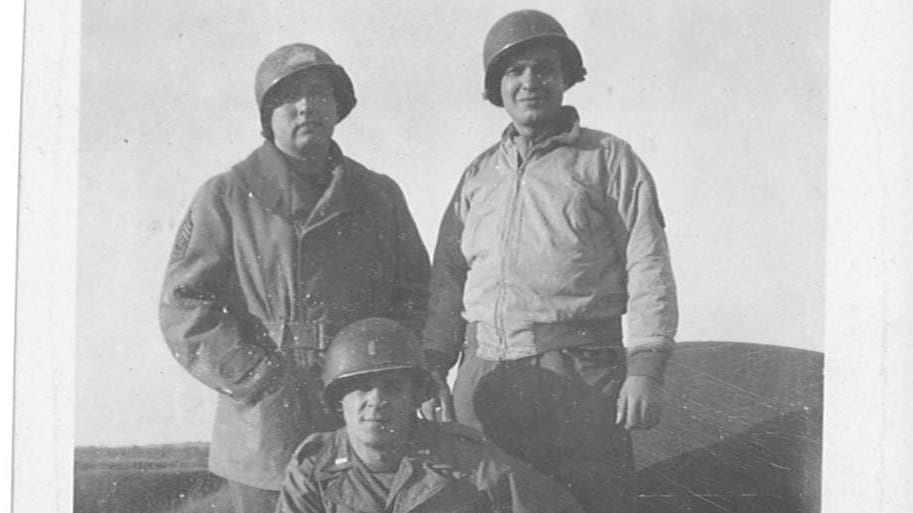 1st Sgt. William McGraw, left, and two friends, somewhere in France, 1945. "Sarge" was father to reporter Mike McGraw, who would inherit the wartime letters between his parents. (Credit: McGraw family)
Share this story

The history of the day, according to the U.S. Department of Veterans Affairs:

In November 1919, “Armistice Day” was proclaimed by President Wilson as a day for businesses and citizens to “briefly” pause at 11am on November 11, as moment to remember the temporary cease-fire between the Allied nations and Germany during WWI.

The next great war came, as did other conflicts, and after several iterations of the holiday – including moving it to October and back – Veterans Day came to its permanent resting place in 1978.

In October, Flatland reporter Mike McGraw wrote an intimate portrait on the letters written between his parents while his father was stationed overseas. Trace First Sgt. William A. McGraw’s journey from Fort Leavenworth Kansas, to the European front, and back again with this interactive map. Read the full story here.

From this research, McGraw became involved in Kansas City’s The Telling Project, which aired in part on KCPT Tuesday evening.

The stream below follows all #VeteransDay posts on Twitter:

RT @SystemsAgj Enjoy the day with your family and friends! See you on Monday! 😊 #happyveteransday #veteransday #dayoff pic.twitter.com/KlkXqTIT60

RT @HQ_IDS_India Gen Anil Chauhan, #CDS extends best wishes to veterans & their families on the occasion of Armed Forces #VeteransDay. We continue to strive to live up to the high standards & rich legacy of our veterans. You will forever remain a source of inspiration to the serving fraternity. pic.twitter.com/1CgdbYU8sZ

About 9 hours ago from mahavir yadav's Twitter · reply · retweet · favorite

About 11 hours ago from Sonia Colpo's Twitter · reply · retweet · favorite

RT @mccarrennews Below reminds me of that #VeteransDay when #JohnMcCain the most famous resident of #TheHanoiHilton came to @PressClubDC to talk about his book with then Club President and fellow Vietnam War veteran Myron Belkind twitter.com/andreamccarren… pic.twitter.com/dhXyG62p5F

About 15 hours ago from Andrea McCarren's Twitter · reply · retweet · favorite

Below reminds me of that #VeteransDay when #JohnMcCain the most famous resident of #TheHanoiHilton came to @PressClubDC to talk about his book with then Club President and fellow Vietnam War veteran Myron Belkind twitter.com/andreamccarren… pic.twitter.com/dhXyG62p5F

About 15 hours ago from Bill McCarren's Twitter · reply · retweet · favorite

RT @BaliJibril On this #VeteransDay i would like to remember and thank all #Somaliland fighters who helped the allies defeat Nazis and fascists. pic.twitter.com/QX22PSXYEu

RT @JaredAllen69 As many as 24% of active-duty service members and their families experience food insecurity in the United States. Find out how @FeedingAmerica is helping them get the meals they need to thrive #VeteransDay

About 16 hours ago from Dean C's Twitter · reply · retweet · favorite

RT @scobie On #VeteransDay, the Sussexes visited service members (from all six branches of the military) and their spouses at Joint Base McGuire-Dix-Lakehurst in New Jersey. A rep says the group discussed mental health, the value of community and living a life of service. 📷: Lee Morgan pic.twitter.com/9JpBsSUW5Z