Debate Over The Minimum Wage Draws National And Local Leaders 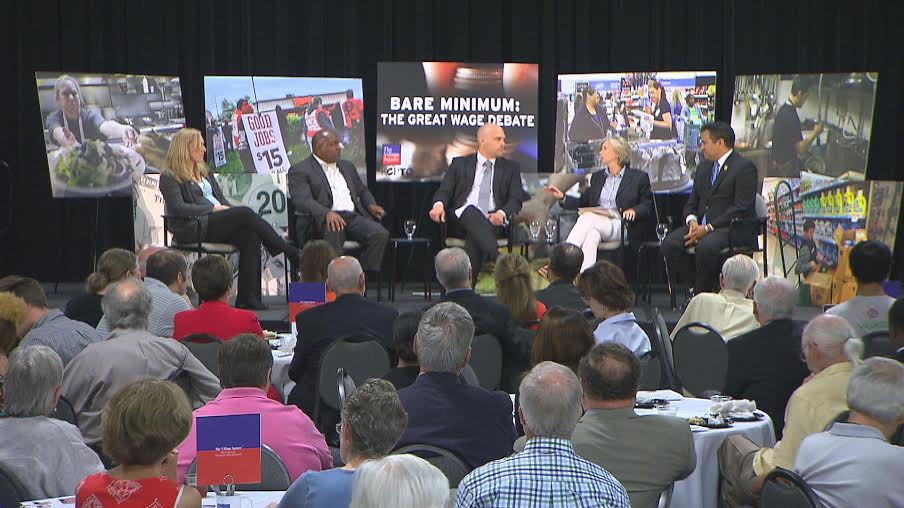 According to an MIT Living Wage Calculator, an individual in Kansas City would require more than a $9 dollar an hour wage in order to sustain an above-poverty lifestyle.

For years, efforts to raise the minimum wage at the federal and state levels have faltered. Now, some of the biggest cities in America are taking matters into their own hands. In May, the Los Angeles City Council voted to raise the local minimum wage to $15 an hour by 2020. An ordinance awaiting approval across the state in St. Louis would match Los Angeles. Is Kansas City about to join them?

The local organization Stand Up KC has said a $15 an hour wage by 2020 is necessary for those struggling to get by. But business owners have said those wages could cause them to cut jobs, reduce hours, or go out of business. Mayor James has said a $13 an hour wage is more reasonable.

On Monday, June 29, the Kansas City Chapter of The Village Square and KCPT hosted a debate about whether or not to raise the minimum wage in Kansas City. The debate was separated into two separate panels; one featured local leaders and the other featured national economists.

The opposition to a wage increase, Annie Presley and Carlos Gomez, say that small businesses can’t afford the $15 an hour wage advocates have called for, a 97 percent increase.

Gomez said some small businesses he works with though the Hispanic Chamber of Commerce have said a wage increase of that magnitude could cause lay offs, a reduction in workers’ hours, and even businesses moving out of the city.

“We need those small business. You will not have a healthy neighborhood without healthy small business on that local corner,” said Gomez.

But Lara Granich said that the gradual increase to $15 an hour over a number of years will give businesses enough time to adapt.

“We see the cities that have already increased their minimum wages, so that they’re already at a high level, the sky hasn’t fallen. There’s really no research showing there isn’t a way for the economy to adapt to a $15 dollar minimum wage,” says Granich.

Annie Presley used an example of her baker’s 17-year-old son working at a pizza restaurant to highlight why the minimum wage plays the role of an incentive for people to work their way up.

“It doesn’t matter if it’s a high school kid or a mom who wants to go back to work, they have to start somewhere, and you can’t start at a wage that you don’t have a skill set for,” said Presley. “From all the jobs I created over the years in my four businesses, it seems like it worked.”

But Howard argued that increasing the minimum wage is a moral issue. He said those who wish to work are worth more than the current minimum wage and it needs to be addressed.

Scott Lilly said that a 1992 study out of the New Jersey Legislature shows that the claims about reductions in employment after wage increases are unfounded. The study looks at fast-food restaurants along the New Jersey and Pennsylvania state line after an increase in New Jersey’s minimum wage.

The reason labor change remained the same, he said, is because the restaurants saved money on training. The raise in wages decreased turn over, allowing them to save money on training with a slight increase in prices.

“There are some times when raising those wages are good for employers, even when they don’t know it,” said Lilly.

But Michael Saltsman responded that when you when you look at the research in its totality, you see that wage increases are often followed by a decrease in employment.

Saltsman said there isn’t hard data coming out of West Coast cities that have already raised the wage, but his organization is seeing anecdotes from businesses that are being forced to close.

“These are businesses that have been written up in the San Fransisco Chronicle, the Oakland Tribune, of childcare providers who have had to lay off staff and raise rates, of small pizza restaurants that have had to close their doors,” said Saltsman. “These are real stories.”

Saltsman said that his organization believes an earned income tax credit, which would boost wages through the tax code rather than wage, would be more successful at reducing poverty.

Bill Greiner, an economic historian, said he believes that a $15 dollar minimum wage would bring us into historically uncharted territory with possibly unintended consequences.

“You try to solve one problem, as was stated not he earlier panel, it’s like playing wack-a-mole, you know the little wack-a-mole game. You smack the mole on the head and another one pops up,” said Greiner.

However, Greiner also said he thinks that we could afford to raise the wage to roughly $9 dollars, which would adjust the current wage for inflation.

Mayor Sly James has called for Kansas City Council to vote on a minimum wage increase on July 16th.

Many Americans are staying away from banks

Here's what's going on with the 'unbanked' in KC

Tags: Getting By in KC • minimum wage