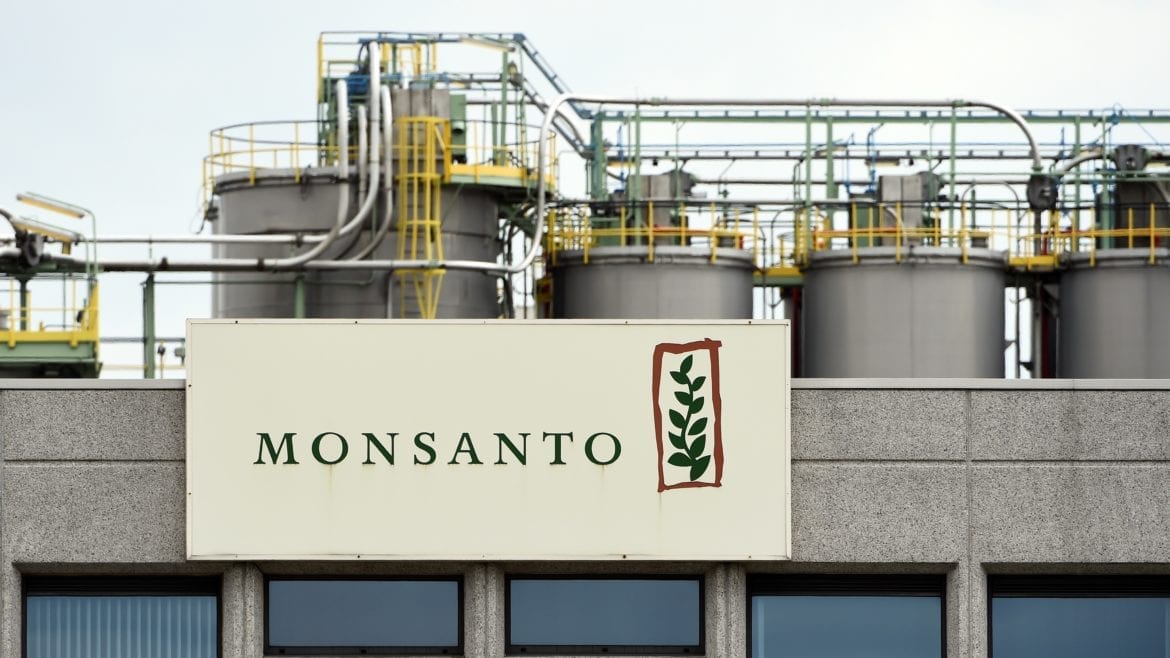 The Monsanto logo on a building at the firm Manufacturing Site and Operations Center near Antwerp, Belgium, on May 24. (Photo: John Thys)
Share this story

The German pharmaceutical and chemical giant Bayer says it will buy U.S. seed seller Monsanto for $66 billion in an all-cash deal that will create the world’s largest supplier of seeds and agricultural chemicals.

The takeover offer, which Monsanto has accepted, is $4 billion more than Bayer had initially offered and a 44 percent premium over Monsanto’s stock price on May 9, a day before negotiations began. Bayer says it will be taking on $57 billion in debt to finance the purchase, which is the largest-ever foreign acquisition by a German company.

The two companies have little product overlap, NPR’s Jim Zarroli explained back when the deal was being negotiated. But regulators might still be wary of the purchase, based on the combined control the company would have over agricultural products.

St. Louis-based Monsanto is the world’s largest seller of seeds and the leading producer of genetically modified crops.

Bayer, meanwhile, might be familiar to many for its aspirin products — but it’s also a major player in pesticides. As the Two-Way has reported, “the company is a German pharmaceutical and chemical powerhouse with 102,000 employees and $41 billion in revenue last year. Like Monsanto, it sells agricultural products such as seeds and pesticides. That’s in addition to a plastics business, diagnostic imaging products, health products for animals and a biotech division.”

The purchase is part of “a dramatic wave of consolidation among the companies that sell seeds and pesticides to farmers,” as NPR’s Dan Charles puts it.

“Two other such deals are currently in the works,” Dan explains. “DuPont is merging with Dow, and the China National Chemical Corp. is buying Syngenta, which is currently the world’s biggest seller of agricultural chemicals.”

The Bayer-Monsanto deal might have interesting cultural consequences, as well

Monsanto, Dan notes, “has come to represent, in a shorthand way, lots of things that some people love to hate: genetically modified food; patents on seeds; lawsuits against farmers for saving and replanting those seeds; and corporate influence over government food policy.”

Dan says there are a number of questions: Will people still march against Monsanto if Monsanto is no more? And how will Europe — famously opposed to GMOs — respond to the world’s biggest GMO seller becoming an European company, instead of an American one?

Reuters reports that Bernstein Research analysts give the deal a 50/50 chance of being approved by regulators.

The analysts anticipate “political pushback” to the deal, including resistance from farmers, the wire service writes.

The deal comes as falling crop prices have caused a slide in farm profits, “which has cut into the amount that farmers can pay for chemicals and seeds,” Jim tells our Newscast unit.

He says the deal is expected to be completed by the end of 2017. But should the deal fail to win regulatory approval, Bayer has agreed to pay a $2 billion fee.