‘A Gift of Personal Safety for Christmas’ 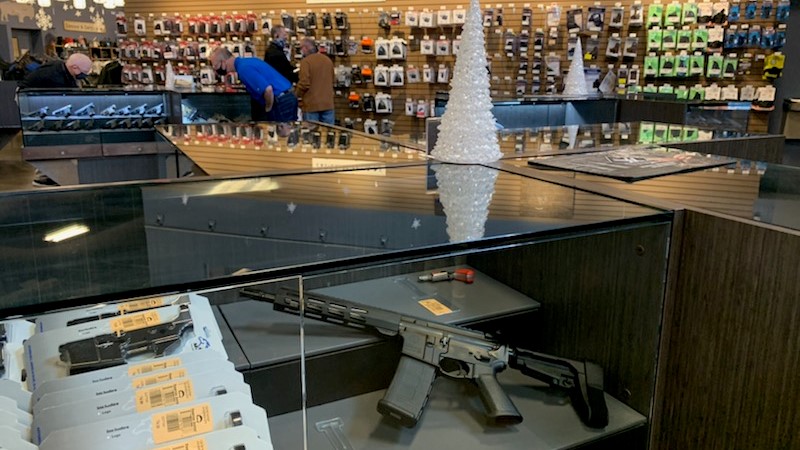 A Christmas tree sits above the glass case holding a black rifle at Frontier Justice on Nov. 20, 2020. Gun stores are preparing for increased sales for the holiday season. (Jacob Douglas | Flatland)
Share this story

The Frontier Justice store in Lee’s Summit has a “soft entry.” If someone blindfolded you, and dropped you in the front of the store, you might think it was a women’s clothing store.

Pace forward just a few steps, though, and you’ll see knives and handguns in glass cases, displayed as if they were five-carat diamond rings. On top of those cases sit little shiny white christmas trees, signaling the upcoming holiday season, and an ongoing shopping spree for firearms, ammunition and accessories.

According to FBI NICS Firearm Background Check data, 2020 has seen more than 32 million background checks for firearms, a record high, and we aren’t even to Black Friday yet.

Last year on Black Friday, more than 202,000 background checks were made, the third most on a single day in U.S. history. The first? More than 210,000 on March 20, 2020, just as fears of a pandemic blasted to the forefront of American minds.

“We definitely see a spike in the fourth quarter, always,” said Bren Brown, co-founder of Frontier Justice. “That’s our highest sales volume every year regardless of what’s happening politically. And firearms is a very volatile market, and it has to do with what’s going on in the world, as well as politics. So this year is a perfect storm for buying all year long.”

Mark Joslyn is a political science professor at the University of Kansas. His book, “The Gun Gap: The Influence of Gun Ownership on Political Behavior and Attitudes,” analyzes how gun ownership influences how people vote.

He said there are three main reasons for an increase in gun ownership in 2020 — the COVID-19 pandemic, widespread social justice protests in the summer, and a looming Joe Biden presidential administration.

“I suspect gun sales will be above average during this holiday season,” Joslyn said in an email. “Pandemic concerns and civil unrest remain concerns and the anticipation of a Biden administration will inevitably lead to additional gun purchases as well.”

Andrew Dove, a senior majoring in Mechanical Engineering at the University of Missouri, had been interested in firearms for a couple of years. He started watching YouTube videos about guns and engineering, and is a fan of the John Wick movie franchise, as well as “Call of Duty,” one of the most popular first-person shooter video game franchises.

In August of this year, he decided to start building an AR-15.

“I think that 2020 was the straw that broke the camel’s back for me,” Dove said. “I already had what I wanted in mind, but then 2020 came around and it’s like, okay, well we might be facing stricter gun control in the next presidential (administration). So it might be a really good time to capitalize on the moment.”

Dove’s interest in firearms is that of fascination. As a mechanical engineering student, he finds the AR-15 to be a technological marvel, and cited the customization of the rifle to be a driving force behind his interest.

Dove said he’s buying the gun to take it to the range and shoot for fun, not to defend himself against intruders. He cited videos of Keanu Reeves training for the John Wick movies as the type of competitive shooting he would like to try.

This is the first gun Dove has owned, and because of how expensive it was to build, he doesn’t foresee buying another soon. He will, however, be looking for deals on accessories like sights, and flashlights on Black Friday.

A Kansas City resident, Tyler, who asked to keep his last name anonymous due to worries of the current political and social climate, purchased a Glock 9mm pistol in July, and has built an AR-15 as well.

“I don’t like guns, and prior to this year I was pretty anti-gun,” he said. “But the specter of civil unrest, or even a civil war, got me concerned about my family’s safety.”

Brown said that this is a common reason she hears from new gun owners coming in to purchase a firearm from her store.

Concerns about being “tracked” by the government also seems to be a big concern for gun buyers right now. Brown said that the store has seen an increase in customers paying in cash, to avoid having the purchase tracked. That fear would appear to be unwarranted, as the federal government does not keep a gun registry that ties gun owners to their firearm.

Concerns about civil unrest and the pandemic led to another problem for gun owners: panic buying of ammunition.

“People are lined up to go in and get ammo, because obviously, a firearm won’t work without ammo,” Brown said.

The “ammo bunker” at Frontier Justice in Lee’s Summit is barren. Shelves are so empty you can see through them to the next two rows.

Arizona-based ammunition manufacturer Ammo Incorporated reported in September that it had $80 million in back orders. Gun owners have been discussing on forums like Reddit and Facebook about how sparse 9mm and .45 ammunition has been in stores.

The ammo shortage is due to people hoarding large amounts of ammo that they bought when the pandemic began, similar to what people did with toilet paper.

Brown said that any time her stores get a new shipment of ammunition in, they have customers calling to reserve bullets. She mentioned that when a new shipment of 9mm came to the Kansas City, Kansas, location last week, it caused a line outside of the store to pick up the ammunition.

Those lines are similar to what Frontier Justice sees on Black Friday most years. This year will be a little different with the pandemic and concerns of social distancing. Instead, the store will be turning a lot of its sales online. Brown says they have already seen people take advantage of their deals.

The biggest deal right now is $100 off of a membership at $199.99, which includes priority access at the shooting range, and advanced notification on sales.

Another popular product has been gun safety classes, which Brown said has seen an increased demand with the uptick in first-time gun owners. She suspects that people who bought them early in the year will be coming back to catch a deal on a class to learn how to use them safely.

Brown also anticipates the increase in women buying guns to continue into the holidays, adding that typically a lot of guns that are bought for the season are handguns or rifles for women, which usually comes with the sale of a training class as well.

Brown said that the recent increase in sales has helped make up for what the gun industry called the “Trump Slump” during President Donald Trump’s administration.

The slump referred to fewer people buying guns and ammunition, because the climate was considered favorable for gun owners. NICS background checks did dip after 2016, but then resumed climbing until the record breaking year of 2020.

It remains to be seen whether Black Friday 2020 will break the records of last year, but one way or the other, people will be receiving guns for Christmas, much like every other year.

“Undoubtedly, many, many people are getting a gift of personal safety for Christmas,” Brown said.