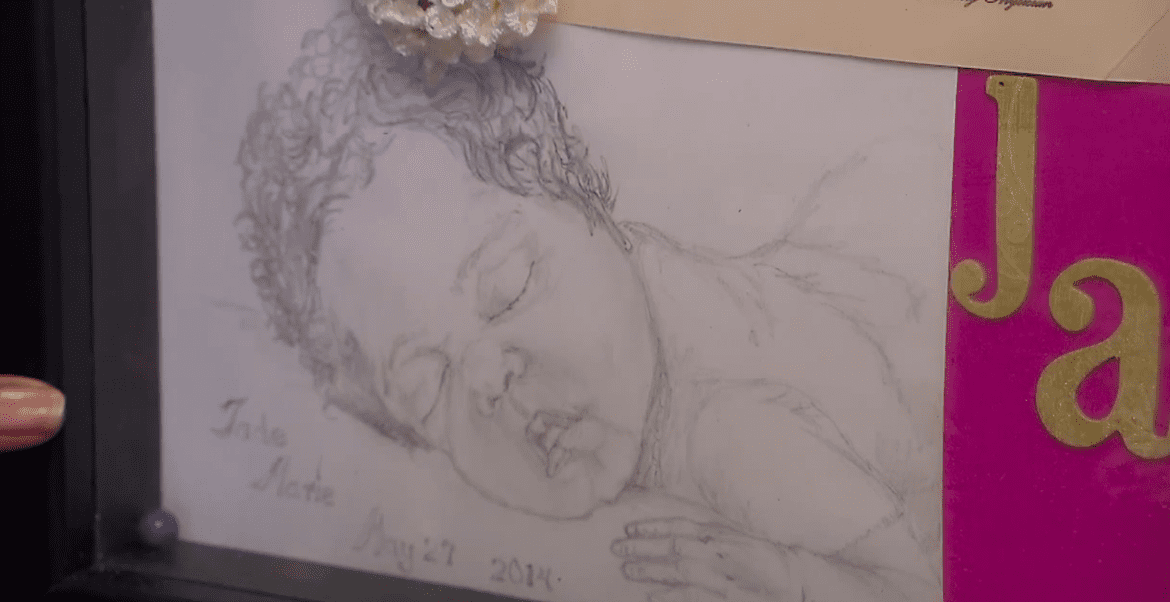 The hospital presented this sketch of Jade Marie Anderson to her parents after her stillbirth in May 2014. Her mother, Ashley Anderson, who lived in Kansas City, Kansas at the time of the birth, has the sketch in a glass-covered keepsake box that also includes locks of Jade's hair, a headband from an outfit provided by the hospital, and a birth souvenir provided in place of a birth certificate.
Share this story

After Ashley Anderson gave birth to her daughter, Jade Marie, the nurses placed the little girl on her mom’s chest. She says she remembers her newborn looking serene, with delicate lashes, her eyes gently closed.

The heart-breaking truth – as Anderson had learned during the delivery – was that Jade had died in the womb.

“I just couldn’t believe she wasn’t breathing,” Anderson said. “She just looked like she was sleeping.”

Jade would’ve been a year old in May, but Anderson is far from the only mom in Wyandotte County who must celebrate filial milestones with only memories.

Wyandotte is one of just three Kansas counties where infant deaths reached triple digits combined between the years 2009 and 2013, according to the latest statistics from the Kansas Department of Health and Environment.

Wyandotte’s infant mortality rate is also one of the worst in the state.

But more than two years after receiving a $300,000 grant to get at the root of its infant-mortality problem, the community is making strides in identifying solutions through a Fetal and Infant Mortality Review (FIMR) program, which includes detailed interviews with the moms.

“The exciting thing about Wyandotte County is that there is so much emphasis on community health, with the mayor’s office, with some of the local neighborhood groups, with the faith-based community, it seems like the right time to really push a lot of efforts forward,” said Dr. Michelle Haley, a Children’s Mercy pediatrician working on the program. “My hope is that we are able to collaborate through all of those efforts.”

Health experts say that a high rate of fetal and infant deaths is an important indicator of broader health problems within a community, since things like smoking, obesity, and lack of medical services can contribute to an unhealthy pregnancy.

The logic, then, is that reducing deaths among the most vulnerable members of a community will translate into a healthier population as a whole – especially among lower-income populations where poverty plays such a large role in poor health.

The hope, as well, is that the children that do live will also get off to a healthier start, thereby producing a ripple effect that pays dividends for generations to come and maximizes the impact of public health dollars, according to Shannon Cotsoradis, CEO of the nonprofit Kansas Action for Children.

Kansas Action for Children is among the advocate organizations pushing for state action to reduce the infant mortality rate throughout Kansas.

Infant mortality programs generally include a case review team, comprised mostly of medical professionals, and a community action team, which can include a variety of members, including health care professional and residents with an interest in the topic.

In Wyandotte County, Haley is a member of both groups, and Anderson is working with the community action team.

The maternal interviews provide key insights and are a unique facet that augment information gleaned from medical records, Haley said.

“Hearing that mother’s story really tells you a lot more about the situation,” she said, “and it tells you the barriers that she may have encountered that we wouldn’t pick up through those medical record reviews.”

For example, after examining a dozen cases during the past year, Wyandotte’s case reviewers have identified four broad problems: access to care; education/care for teens; behavioral health services; and education and training for providers.

The team suggested a host of potential solutions for consideration by the community team.

Many of the recommendations called for training, whether it be doctors on the importance of seeing women as early as six to eight weeks into the pregnancy, school nurses and counselors on prenatal resources available for pregnant teens, or prenatal providers on safe mental health medications during pregnancy and breastfeeding.

The case review team assumed that most of these tasks would take at least a year to complete.

But the plan in Wyandotte County is to make this a rolling process as participants glean more information from ongoing case reviews.

That’s the way it has worked in and around Wichita, said J’Vonnah Maryman, director of the Public Health Performance Division in the Sedgwick County Health Department.

They have averaged about 20 case reviews a year since 2011, she said, and its experts have identified many of the same issues uncovered in Wyandotte County.

“This work takes time because there are always nuances,” she said. “It takes a lot of people to be at the table.”

The rest of the story

Anderson became pregnant at age 22, while she was a student at Fort Hays State University, and that’s where she lived for almost the entirety of the pregnancy.

She kept her prenatal appointments. But in retrospect, Anderson said she put too much trust in her physician. He recommended that she let labor occur naturally, even as she stretched weeks past her due date.

Anderson was back in Kansas City, Kansas, when the contractions finally started, 42 weeks into her pregnancy.

Official explanations from doctors here about Jade’s death have been murky, she said, speculating that they didn’t want to open themselves up to liability for the death and wanted to extend professional courtesy to her doctor in Hays.

Anderson said doctors have told her that there was no more amniotic fluid in her womb at the time of delivery and that Jade ingested her own feces. The autopsy report said the extended time in the womb was a potential contributing factor to the death.

Anderson grew up in a family of modest means, so she said she did not have enough experience with the health care system to be a strong advocate for herself when it came to dealing with the doctor in Hays.

Tags: Getting By in KC • health • heartland health monitor