A New Approach To Behavioral Problems In School 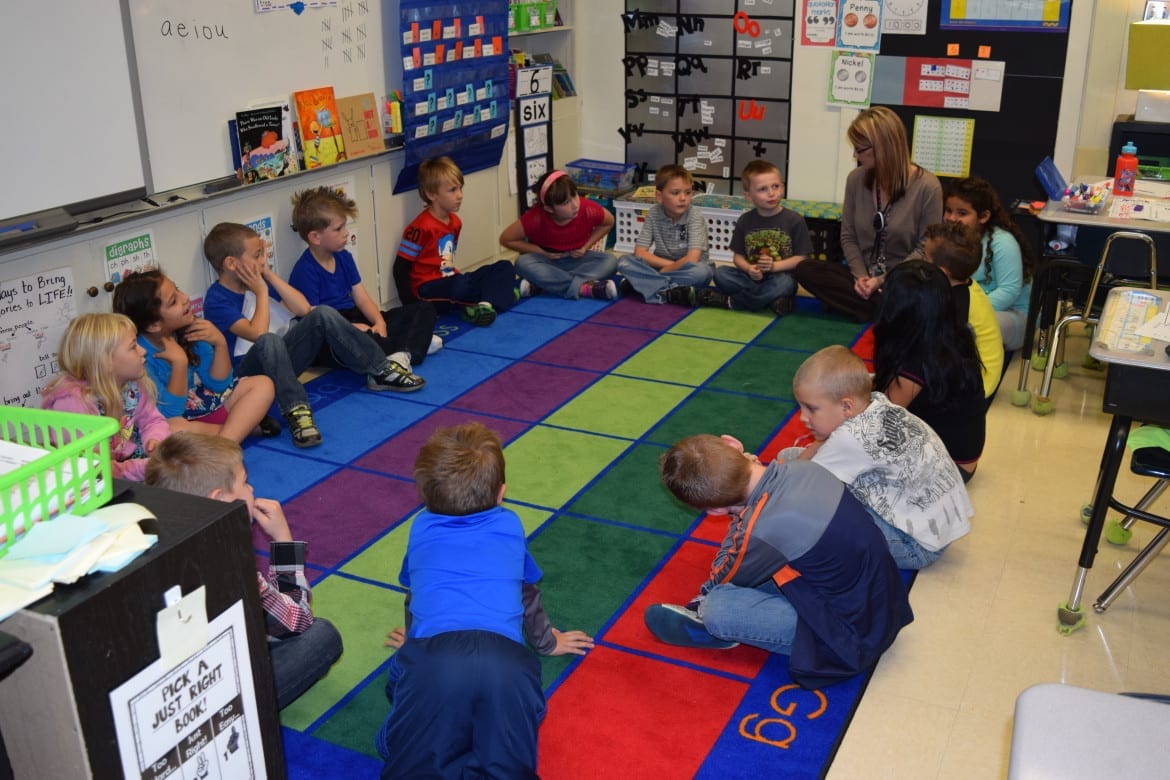 One of the first graders in Lori Williams’ classroom is clearly restless during the students’ morning community circle.

As the children discuss their weekly goals, how to be a good citizen and what integrity means, the young girl is distracted. She wriggles and shifts, pulls both arms through a shirt sleeve and eventually checks out, turning her back to the group and walking her hands up the chalkboard.

Williams gently but purposefully touches the young girl’s foot, asking, “Are you OK?” Startled, the diminutive brunette mumbles, “Yes” and turns around, her attention refocused on her classmates.

In some schools, the inattention and fidgeting would be considered grounds for reproach or punishment. Not so with Williams, who’s trained in the practices of trauma-informed, or trauma-sensitive, schools.

A growing movement here in the Kansas City area and across the United States, trauma-informed care has taken root at local mental health and social service providers, hospitals and schools.

Gradually but steadily, it’s spreading through school districts and early childhood centers looking to catch and stem childhood behavioral problems in the hope of avoiding hospitalizations and incarceration in adulthood. Although there isn’t much hard data yet showing whether the programs are effective in changing behavior, early results from preschool to high schools are encouraging.

The movement is based on the idea that much of student misbehavior may be the result of a brain that has been overwhelmed by repeated traumatic experiences.

Instead of providing reactive services for students in crisis, teachers in trauma-sensitive schools attempt to diagnose underlying problems and keep children emotionally present, opening their brain up for learning.

“We need to give some extra TLC to these students,” says Amy Hawley, principal of Alexander Procter Elementary School in Independence, Missouri, where Williams teaches. “Maybe provide extra triage and figure out what we can do to help support them inside these walls where we have some control.”

When someone experiences stress, the body responds by releasing hormones that provide energy for “fight or flight.” When that occurs regularly, it takes longer for the hormones to diminish, affecting children’s brain development.

Trauma can occur at any income level, but tends to be more prevalent among lower-income, urban populations, according to Molly Ticknor, a trauma-sensitive trainer with Truman Medical Centers’ Resilience Incubator. The incubator provides training to area social service agencies, schools and other groups. Ticknor was one of the first to introduce the idea to elementary and secondary education locally when she began working with the Kansas City Public Schools three years ago.

More than 95 percent of students at pilot schools in Truman’s program qualify for free and reduced lunch, meaning they live below the poverty line. Ticknor has worked with districts including Independence, Kansas City, Center, Leavenworth, North Kansas City and Blue Valley. She says connecting the dots between poverty, toxic stress, violence and neglect often leads to a diagnosis of trauma.

The Independence School District took on the issue because administrators knew a large number of students had experienced significant trauma, says John Tramel, director of Family Services & Caring Communities with the district. That’s in part because of the socioeconomic status of its population: A majority of students are low-income and more than 5 percent are homeless.

“We know we have children in every socioeconomic range that suffer from trauma and they walk in not ready to work on reading or math or whatever else we are trying to teach,” says Beth Savidge, an assistant superintendent in the district. “We have to take care of the emotional side as well as the academic side of teaching to create an environment where children are able to learn.”

When hardwired to remain in a heightened state of awareness, children who experience toxic stress are in constant overdrive. In elementary schools, this can take the form of outbursts, name-calling or putting one’s head down on the desk and refusing to work.

Ticknor says she has seen some early changes in this kind of behavior at schools undergoing her training. Two pilot elementary schools in Kansas City, for instance, had fewer behavioral problems after implementing trauma-sensitive principles. Through October of the 2013-2014 school year, Garfield and Rogers Elementary had 186 disciplinary referrals. At the same point in the 2014-2015, the schools had 139.

Catching children early is important because these behaviors only intensify as they age. In middle and high school, they begin to look to drugs, alcohol and other risky behaviors to cope.

At Lincoln High School in Walla Walla, Washington, much of the student population had experienced some sort of childhood trauma, including parental abandonment, sexual abuse and mental illness among family members. The school was a roiling cauldron until 2010, when its principal, Jim Sporleder, went to an educational conference where he learned about trauma-sensitive schools.

Sporleder had wearied of the traditional way these schools were run, with students acting out, getting suspended and returning to school ready for another fight. This cycle, he says, is “the easy way out.”

“If you can seek the cause … you can the change behavior,” he says in the documentary “Paper Tigers,” which examines the school’s trauma-sensitive journey.

Sporleder began implementing the trauma-sensitive principles and within three years, the number of fights at Lincoln went down by 75 percent and the graduation rate increased five-fold.

After seeing such success with the program, the community decided it would be beneficial to begin this work at a younger age and enlisted the help of Kansas City’s Crittenton Children’s Center to train the community at the early childhood level. Crittenton created Head Start Trauma Smart, a nationally-renowned model used since 2010 in early childhood centers.

Crittenton was also called upon to work in secondary schools locally in 2014, training staff at Summit Ridge Academy, an alternative high school in Lee’s Summit, Missouri. The staff has seen positive results. In the 2014-2015 school year, the attendance rate increased by more than 83 percent among 75 percent of its students; the passing rate onto the next grade level increased by 10 percent; and confrontations fell by 50 percent compared with the previous year.

Janine Hron, CEO of Crittenton, said prior to implementing Trauma Smart in the Head Start program, up to 12 percent of Head Start children were being referred to Crittenton for therapy for behavioral disorders.

After the program, that number went down by 50 percent. That equates into educational savings. As children move into elementary school, those with behavioral challenges are placed on what’s known as an individualized education program and receive special education services. Hron says the average cost to teach a child on an IEP is about $32,000 annually – as opposed to about $12,000 for other students.

“If there are two to three kids per class on an IEP and at least one is there because of behavioral reasons … then if 50 percent of those can be accommodated by improving their environment, that’s a lot of money,” Hron says.

In spite of these potential savings, Ticknor says there’s always some pushback against the initiative among districts, schools and staff. About 20 percent of people in the groups she works with don’t buy into the concept because of other issues like curriculum priorities, state standards, teachers’ contracts and testing prep.

Funding is also a challenge for cash-strapped districts. Truman’s program begins at $125 per hour for consulting and coaching and $40 per staff member for initial training. Ticknor said much of her work with schools has been funded through federal grants and other external funding. The Head Start program initially cost about $400 per student a year. Hron said it averages less than that now since they streamlined the training.

Ticknor trains schools on a framework rooted in concepts developed by Massachusetts Advocates for Children, a Boston-based nonprofit, which observed more than a decade ago that students who were frequently expelled or spent a lot of time in detention had often experienced some kind of trauma.

The group generated a series of papers highlighting the impact of domestic violence on children’s brains and adopted general principles of trauma-sensitive educational environments.

Ticknor built on this to create a general framework that instills creative problem solving, mindfulness, self-regulation and trust building. The concepts are supposed to be part of every aspect of the students’ experiences at school.

Hawley has incorporated them wholeheartedly at Procter, with much of the work focusing on goal setting, communication and rituals to make students feel safe.

Instead of saying “good morning,” greeters inquire, “How are you feeling today?” when students arrive.

Children are taught to fill each other’s emotional buckets instead of being “dippers.” The staff is encouraged to take “thankful walks” during breaks. To keep students in the room when they are acting out, teachers divert their attention with tactile objects like Play-Doh and exercise bands to refocus their energy.

If children do need to leave, they are sent to a recovery room where they work on managing their emotions.

When researching ways to help students manage emotions, Hawley came across the idea of professional therapy dogs and adopted a gentle Labrador retriever, Millie. The dog, who spends her days resting in the school’s office, is trained to sense when children are anxious and offer a soft paw of support. If they need extra care, she can spend 15 to 20 minutes acting as a comforting “blanket.”

Since the implementation of trauma-informed teaching, behavior at Procter has changed dramatically. In the 2013-2014 school year, there were 542 referrals to the principal’s office. Last year there were 323 and this year there were only 98 through November.

Back in Williams’ room, the students in the circle discuss how to be respectful, responsible and safe, a mantra repeated in the classroom, on posters throughout the building and in morning announcements.

They show how they feel by giving a thumb’s up, sideways or down. They brainstorm ways to make unhappy students feel better, like smiling or playing with them. One young student reaches over and ties a friend’s shoes. Another – a self-proclaimed animal expert – offers to share his knowledge with anyone interested. The students are sleepy but relaxed and forthcoming with their ideas, goals and emotional state.

“We are teaching kids how to be aware and mindful of their bodies and understand what to do when they are scared or anxious,” Ticknor says. “Because if they don’t know what is happening, how can they be expected to regulate themselves?”

Tammy Worth is a freelance journalist based in Blue Springs, Missouri.