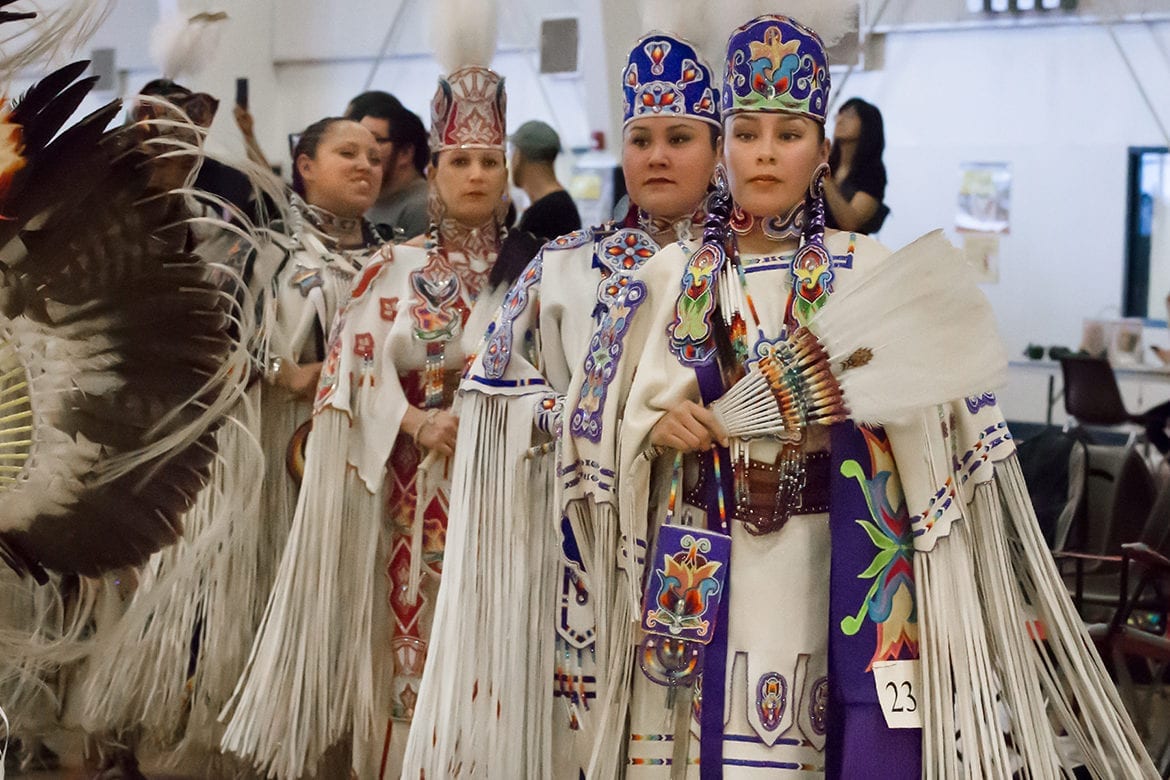 The junior and senior buckskin dancers line up for the Grand Entry procession at the Annual AIHREA Our Nations' Energies Health and Wellness Powwow. ( Serena S.Y. Hsu | Flatland)
Share this story

If you want to know how many American Indians live in the United States, the Census Bureau will tell you — sort of. That’s because its count of approximately 2.6 million Native Americans, or about 0.8 percent of the population, mostly groups them together with indigenous Alaskans.

The same goes for federal health and education data. The typical category is American Indian and Alaska Native, or AI/AN.

And that frustrates people like Sean Daley, an anthropology professor who specializes in Native American affairs at Johnson County Community College in Overland Park, Kansas.

So Daley, along with his wife, Christine, focus specifically on Native Americans through the American Indian Health Research & Education Alliance. Started in 2006, the alliance includes a center that Christine heads at the University of Kansas Medical Center and another one that Sean runs at JCCC.

Much of the funding for the alliance comes through the National Institute on Minority Health and Health Disparities, and the alliance focuses mainly on tribes in the Plains states, stretching from the Dakotas into Oklahoma.

The American Indian Health Research & Education Alliance devotes much of its time to increasing cultural awareness among both Native Americans and the general public. In May, it hosts the Our Nations’ Energies (ONE) powwow. And in November, it puts on the American Indian Art and Culture Extravaganza. Both events are held at Johnson County Community College. (See the slideshow below.)*

Alongside these events, Kansas City PBS and The Bridge 90.9 are hosting a screening at 6 p.m. Thursday of  “Rumble: The Indians Who Rocked the World.” The screening will take place at the Plaza Branch of the Kansas City Public Library, 4801 Main St. More details about the event are here.

There is a direct line between the native dances and traditional art that the alliance highlights and the modern-day musicians featured in “Rumble,” AIHREA Associate Director Sean Daley said.

Native American work — be it beads, pottery, dance or rock ’n’ roll —  is all part the same artistic expression, he said. And, if you grow up in a culture that values music and dance, Daley said, it’s no surprise that American Indians have influenced various musical genres. “That is part of the same artistic tradition — absolutely.”

The alliance provides an avenue for research by, and for, Native Americans. It also facilitates outreach to the American Indian community — and aims to eliminate stereotypes.

“I can’t tell you how many native students I’ve had at JCCC where they will tell me point blank they don’t identify as native because they are tired of people asking them if they live in a tepee,” Daley said.

Smoking cessation is a main priority for the partners, given that more than one in five AI/AN adults smoke, the highest percentage among U.S. ethnic groups.

The alliance works through a specialized program called All Nations Breath Of Life, which takes into account the important role tobacco plays in tribal ceremonies. All of the facilitators are Native Americans.

The goal is to distinguish between the ritual use of tobacco — which typically involves a native-grown type that is blown into the air — and addiction to commercial products.

“Traditionally we didn’t inhale cigarette after cigarette,” said Jason Hale, assistant director and research instructor at KU Med’s Center for American Indian Community Health. He is a member of the Prairie Band Potawatomi Nation and grew up on the reservation in Mayetta, Kansas.

Tribal members from across the nation compete for cash prizes at the Annual AIHREA Our Nations' Energies Health and Wellness Powwow. Pictured is Kasen Street of the Meskwaki/Dakota tribe (North Dakota). (Serena S.Y. Hsu | Flatland)

The regalia worn at powwows are crafted by American Indian artisans or by family members and are passed down from generation to generation. (Serena S.Y. Hsu | Flatland)

This youth aspires to be a full-time powwow dancer. "I train really hard for this. I'm building my upper arm muscles to carry heavier bustles for the power moves." (Serena S.Y. Hsu | Flatland)

Pictured is Charley Lewis of the Paiute and Navajo tribes with his baby, Kayden. (Serena S.Y. Hsu | Flatland)

The program has been in place for about 15 years. Its quit rate of 31 percent is three times better than other smoking-cessation efforts for Native Americans, according to the alliance.

Hale and his colleague, Charley Lewis, assistant director for data management at CAIH, also embody another focus of the alliance — increasing the number of Native Americans who graduate from college. Both Hale and Lewis have master’s degrees. Lewis is a member of the Benton Paiute Tribe in the remote town of Benton, California.

The high school dropout rate among AI/AN students is triple that of white students, according to data published in 2017 by the National Center for Education Statistics. Meanwhile, only about a quarter of college-aged AI/AN youth were enrolled in a degree-granting institution, the lowest percentage of all the races/ethnicities listed.

So, the research and education alliance offers college scholarships and summer internships geared toward Native Americans, but which are also open to students of any ethnicity who want to help improve the lives of American Indians.

The alliance prepares Native American youth for postsecondary education through Building Reservation Youth Through Education (BRYTE). One piece of advice they give is for Native American students to consider creating a built-in support network by going to college with their Native American friends.

But even then, as Lewis’s experience shows, the transition to college life can be bumpy.

Lewis was not even thinking about college until a school secretary mentioned to him — late in his senior year of high school — a tribal college named Haskell Indian Nations University in faraway Lawrence, Kansas.

He ended up enrolling with a friend, stepping off the plane — his parents had purchased him a one-way ticket — into foul winter weather the California boy had never experienced.

“So that was a shock itself — coming to Kansas and first thing was an ice storm. It was like, ‘What’s going on?’” Lewis said.

Overwhelmed, he failed out his first semester. He worked for awhile back home, returned with a renewed focus and then went on to graduate. His friend earned an associate’s degree and moved back home.

Lewis and Hale both have attended school with students of various ethnicities. Yet, Hale said, the experience can sometimes be a microcosm of those census figures that lump tribes together; it’s like they are a minority among minorities.

*Captions in the slideshow have been updated to correct inaccuracies with names and a type of dance.

curiousKC: A Visual History on Racial Distribution in the Metro

You Asked, We Found the Connections