Add It to the List: Missouri Schools Now Require New Vaccine for 8th- and 12th-Graders 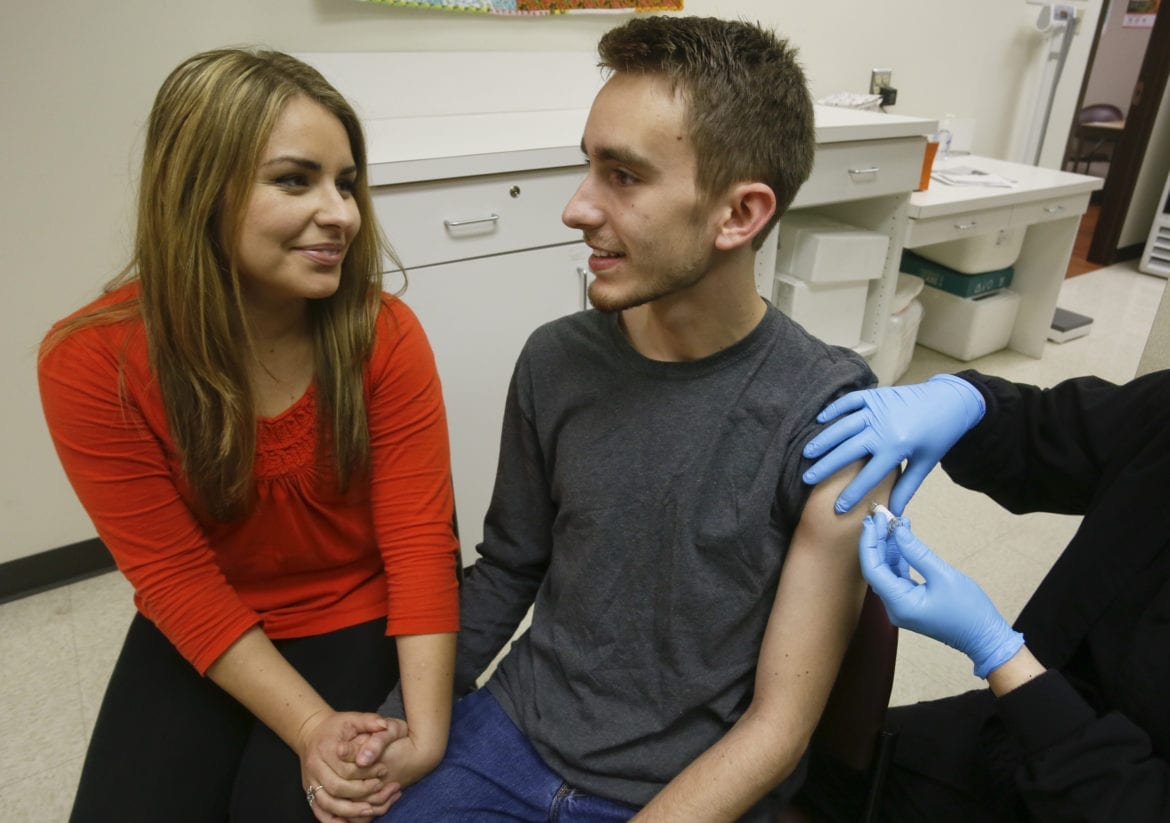 Starting in the 2016-17 school year, Missouri is requiring eighth- and 12-graders to be vaccinated against meningococcal disease. Authorities want to catch students before they enter college, where dormitories pose a high-risk environment for meningitis. (Photo: Jack Plunkett | AP Images for Novartis Vaccines)
Share this story

Summer vacation is almost over, and Missouri parents will want to put those back-to-school vaccinations on the radar, especially with a new requirement for thousands of students around the state.

The Missouri Department of Health and Senior Services is now requiring incoming eighth- and 12th-graders to be protected against four strains of meningococcal disease, which can lead to meningitis, a swelling of the protective membranes covering the brain and spinal cord known as the meninges.

As many as 1,000 Americans contract meningococcal disease each year, according to the National Meningitis Association, killing as many as 150 people annually and leaving many more permanently disabled. Missouri has had 23 meningitis deaths during the past decade, out of 162 confirmed and probable cases of the disease, according to state statistics.

Given that the disease is highly communicable — spread through coughing and other close contact — it’s wise to inoculate kids as they get older and travel in wider social circles, said Dr. Stephen Lauer, a pediatrician at the the University of Kansas Medical Center.

The larger concern, however, comes when students crowd into college dormitories.

Periodic meningitis outbreaks on campuses have garnered national headlines, including a case last year that nearly killed a Mizzou freshman.

The University of Oregon had one death from an outbreak there last year, according to the meningitis association, and nine cases at Princeton University in New Jersey left some students with neurologic damage by the time the year-long outbreak ended in 2014.

But the fact that today’s most common meningococcal vaccine does not guard against the B strain, which caused the campus outbreaks, is a matter of controversy.

The Minnesota-based Immunization Action Coalition has urged the U.S. Centers for Disease Control and Prevention to recommend that the B strain be included as a routine vaccination to avoid confusion among parents and to encourage coverage by insurers.

Skeptics, however, argue the B vaccine is not proven to protect in the long-term or against all cases.

Last year, the CDC’s Advisory Committee on Immunization Practices voted against requiring the B vaccine, citing its limited track record and concerns about its safety and efficacy. The panel left the decision up to the patient and his or her doctor.

Even with all the questions about the B strain, Dr. Angela Myers, a pediatric infectious disease physician at Children’s Mercy Hospital, said Missouri is smart to begin requiring the  meningococcal vaccine.

“It really makes sense to have them get it in middle school or high school,” she said. “Then, they’ve already got it by the time they go to college instead of having them scramble right before college.”

Lauer and Myers said the new requirement might cause a slight spike in the surge of patients during the traditional late-summer physical season.

And that’s just fine with Lauer.

“Meningococcal disease is rare, relatively, unlike chicken pox, but there are no good outcomes,” he said. “It affects previously healthy high school or college students, and the next day, they’ve died.”

Kelly Cordingley is an intern for KCPT and a recent University of Kansas graduate. Follow her on Twitter @KellyCordingley. To reach Cordingley, email kcordingley@kcpt.org.

After a year with no graduation ceremony, pandemic-cursed class of 2020 returns

Looking to Biden Administration for Relief