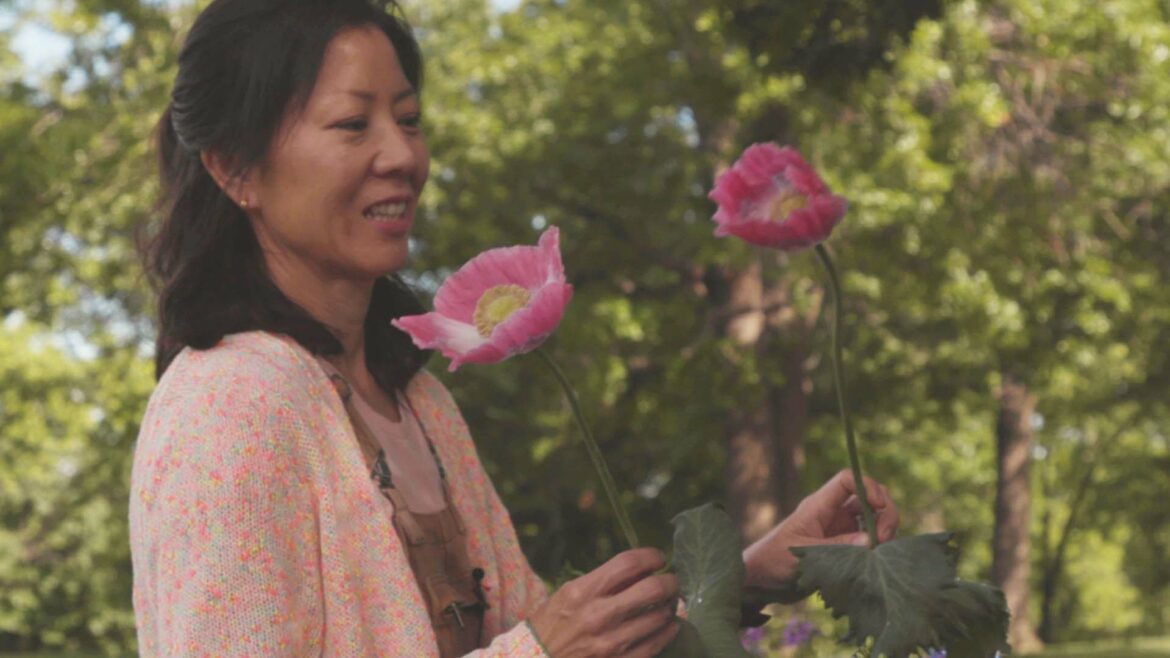 The florists and shopkeepers at Verdant in the Crossroads district aren’t just selling flower arrangements. They’re telling a story about the flowers, where they came from and why it’s important to know.

“It’s definitely a priority for us to be able to say, ‘Hey, this actually is more than just a flower.’ It was cultivated over a season of maybe a year. People planned for this, they prepped for it, and they generously are serving us with it,” said Rachel Loewen, Verdant’s lead floral designer.

Verdant tries to source the majority of its flowers from local growers, so when someone buys a bouquet, Loewen can tell them about the farmer who grew it and why their flowers are special.

For example, when she sells a bouquet of flowers with snapdragons, she could tell them that they were cut by Noella Chung at Morningside Blooms in south Kansas City. She might also tell them that Chung enjoys seeing the bees in her garden crawl inside the tubular flower buds for a drink.

While the majority of people don’t ask about their flowers’ origins, Loewen said it’s important to elevate local growers.

“It may not be important to some people when they walk in here, but I think as they continue to journey with us and shop with us and build relationships with us, it becomes important,” Loewen said. “Part of our job is to educate and enlighten folks as we’re being educated and enlightened as well.”

Part of that educational focus comes through Verdant’s ever-changing weekly arrangements. Rather than having set bouquets, Verdant gets creative each week to use the seasonal flowers brought in from its growers.

“The cool thing … is that those flowers change … but we love that each week is also different. You never know what you’re gonna get with the local growers,” Loewen said.

Folks who want to switch to buying local flowers need to be aware of floral seasonality. Chung said when she sees a fall wedding with peonies (a spring blooming flower) she can’t help but cringe.

“I mean, you don’t go to a farmers market in November and look for a watermelon,” Chung said. “Local flowers reflect the season and … they’re really tied in connection to our seasons (and) with our weather.”

So what about roses on Valentine’s Day?

Another option is heading to Verdant for a dried flower bouquet. Loewen said she developed a good workflow for drying flowers during the growing season to offer something local during the colder months.

Chung encourages folks to get more creative with their winter gift giving. If someone wants to give flowers, consider buying a subscription for weekly bouquets from a local flower farm during the growing season.

Chung said she’d love to see consumers become more aware of the cut flower market and learn that it once was a domestically grown crop. But free trade agreements, primarily with Latin American countries, undercut the domestic flower market starting in the 1970s.

These trade agreements began amid the war on drugs to encourage legal instead of illegal trade industries. But they had the consequence of diminishing domestic flower farms.

Today, according to Agricultural Economic Insights, the U.S. imports almost 80% of its cut flowers. The U.S. is also the biggest global consumer of cut flowers, spending $1.83 billion annually, the Petal Republic reported.

Most international flowers are shipped to the U.S. via air freight, 90% of which arrive via the Miami airport. By the time a dozen roses or carnations hit grocery store shelves in Kansas City, they’ve left behind a long trail of carbon footprints.

Aside from the environmental cost, a recent Business Insider video explored the human cost of cheap, imported roses. Many of the employees cutting the thorny flowers worked long hours with repetitive motions, which led to injuries and sometimes long-term musculoskeletal issues.

Imported flowers have become the standard for all manner of bouquet giving and even White House events.

The American Grown Act has been introduced in the U.S. Senate. If passed, it would require the executive branch, Department of Defense and the State Department to procure cut flowers only from domestically produced sources.

“The American Grown Act makes that symbolic step forward in saying that the federal government and those three high profile agencies, the executive, the state and defense departments, all are committed to sourcing and highlighting and celebrating what is being produced here in the U.S.,” said Camron King, the CEO and ambassador of Certified American Grown.

King hopes to see the rose, which is the U.S. national flower, become an American crop again. While once widely produced in the country, King said now there are only a handful of rose farms in the country.

King is confident that if the bill is passed, the domestic industry could meet the demand as he’s seen it blossom in the past couple of years.

“Sourcing local means that we are both supporting local families and communities, but we’re also really ensuring that the economies of our communities are growing and our farms will be able to continue to farm and produce beautiful foliage and flowers for years and generations to come,” King said.

As one of those local family farmers, Chung hopes to see more and more folks buy local flowers, whether it’s from a florist like Verdant, or from her booth at the Brookside Farmers’ Market.

Aside from the fuzzy feeling of supporting someone in the neighborhood, those in the know say local flowers are simply more beautiful.

“I think people are noticing that when they get local flowers, I hear words like: ‘These are so alive. These are singing. These flowers are just dancing.’ ” Chung said.