A Quick, Clickable Roundup Of Health News From Our Region — And Beyond — For The Third Week Of November 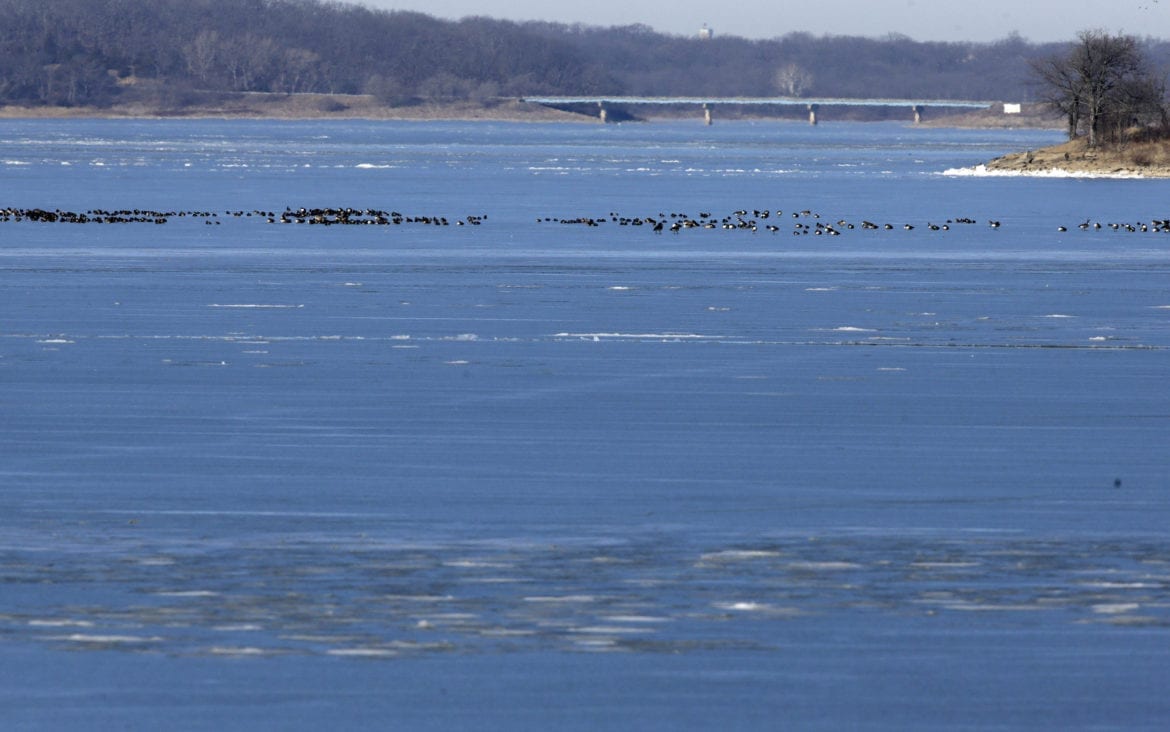 Ducks and geese roost on the frozen waters of Perry Lake near Perry, Kansas on Jan. 16, 2015. A panel appointed by Gov. Sam Brownback is studying ways to finance a 50-year water plan. (Photo: Orlin Wagner | AP)
Share this story

Earl Lewis, assistant director of the Kansas Water Office, presented the preliminary results of the Blue Ribbon Task Force on Monday at the annual Kansas Water Conference in Manhattan.

Lewis said the task force has yet to finalize its report to Brownback, but as of Monday it intended to recommend a constitutional amendment dedicating 0.1 percent of the state sales tax to projects that secure the state’s water supply. Lewis said Minnesota, Missouri and Iowa have similar dedicated sales taxes.

The task force had some rigorous debates about other funding sources, he said. “Any time you talk about water and fees and taxes, it’s going to be contentious,” Lewis said.

— Andy Marso is a reporter for KHI News Service, an editorially independent initiative of the Kansas Health Institute, and a partner in Heartland Health Monitor, which also includes KCPT and KCUR.

But they are a lot less optimistic about their chances than they were before last week.

“There is still significant support in Kansas for expanding KanCare both in the public and among legislators,” said David Jordan, director of the Alliance for a Healthy Kansas, a nonprofit advocacy group formed to push for the expansion of KanCare, the state’s privatized Medicaid program.

Jordan is technically correct. Primary and general election victories by dozens of moderate Republicans and Democrats appear to have given expansion advocates majorities in both the Kansas House and Senate.

The University of Kansas Hospital is opening an obstetrics and gynecology clinic in the center of Kansas City, Kansas, to address a shortage of providers there.

The clinic, slated to open today at 21 N. 12th St., will be the second such clinic operated by KU Hospital in Wyandotte County and its sixth in the metro area.

Over the last decade or so, KU’s OB-GYN clinics  largely have focused on improving access to women’s subspecialty services. The new clinic, however, will seek to meet the needs of women who lack access to basic obstetrical care.

Roy Alcorn shot pool with friends last week as sunlight streamed through the open door of a small building at Equi-Venture Farms.

Alcorn’s new arrangement is part of a pilot program spearheaded by Ben Swinnen, executive director of Topeka-based Equi-Venture, and Tim Keck, head of the Kansas Department for Aging and Disability Services.

The program is targeted at an underserved population: Kansans with intellectual and developmental disabilities who also have severe and persistent mental illnesses. It is one of several initiatives Keck has launched to reintegrate some Osawatomie State Hospital residents into their communities.

A 68-year old Texas woman, who in 1993 was convicted of murder by arson of her uncle, was found not guilty on Wednesday through a new ‘junk science’ law that reopens cases if there is new scientific evidence contradicting the conviction. Alison Stewart reports.