A Quick, Clickable Roundup Of Health News From Our Region — And Beyond — For The First Week Of November 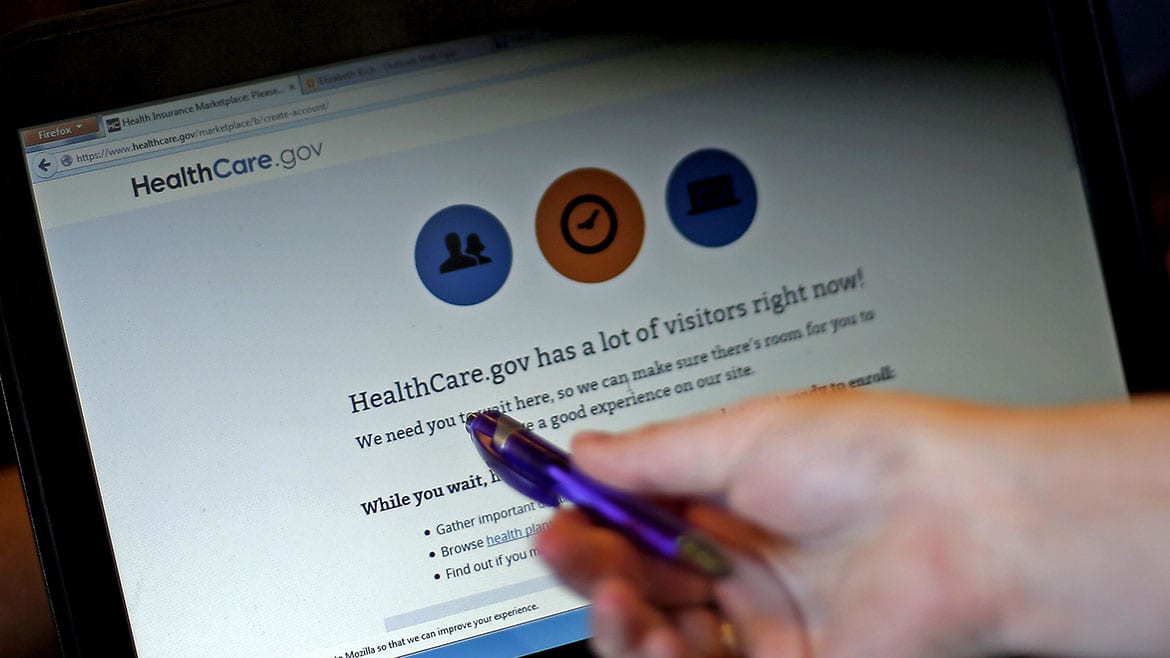 Missouri Takes Step To Hold Down Health Insurance Rates, But Will It Be Enough?

When individual health insurance plans go on sale on healthcare.gov, many Missourians will probably be more than a little shocked to see some rate increases as high as 40 percent.

Similar increases are popping up nationwide, but different states have different powers to address them.

Each year around late April, insurance companies send the state their proposed rates, starting a conversation about what’s fair based on the cost of health care and the health of customers.

—Alex Smith is a reporter for KCUR, a partner in Heartland Health Monitor, a reporting collaboration that includes KCPT and KHI News Service, an editorially independent initiative of the Kansas Health Institute.

Kansas families who buy health insurance through the online marketplace for 2017 could pay $20,000 or more if they have serious medical problems, according to federal data.

Most families likely won’t pay that much because they qualify for subsidies, but the information shows that even low-premium plans can become costly.

Health Premiums To Rise In Kansas, But It Could Have Been Worse

Some Kansans will face the sticker shock of big premium hikes, but their premium increases will be lower than those for some nearby states. And, thanks to Kansas Insurance Commissioner Ken Selzer, they will have choices that they otherwise would not have.

Heartland Health Monitor used data from healthcare.gov to calculate the total costs for a family of four with two 40-year-old adults and two children in seven Kansas counties. Premiums would be different for other families based on age, number of family members and geography. Information isn’t available yet on plans offered by Medica, the newest insurer on the exchange in Kansas.

Marketplace plans are placed in “metal” categories — bronze, silver, gold or platinum — based on cost.

If the family lived in Johnson County and didn’t qualify for subsidies, monthly premiums would range from $656 for the cheapest bronze plan to $1,339 for the most expensive gold plan. Over the course of a year, the lowest-cost plan could save the family almost $8,200 in premiums — assuming the family rarely needed to use its insurance.

—Megan Wingerter is a reporter for KHI News Service

Up to 7,500 people who worked in the Jackson County Courthouse after a retrofit dispersed asbestos throughout the building will be eligible for medical monitoring under an $80 million settlement reached Oct. 25.

The settlement was agreed to after a jury was chosen but before the class-action case was scheduled to go to trial today at the University of Missouri-Kansas City School of Law.

The $80 million will be used to test people who worked in the courthouse for mesothelioma and other asbestos-related diseases over the next 30 years.

When politicians talk about government’s role in caring for the nation’s seniors, they usually limit their comments to shoring up Social Security and Medicare. There’s little mention of elder abuse, end-of-life issues or how best to help families cope with a loved one’s dementia. 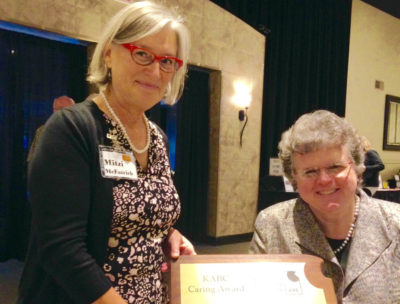 Mitzi McFatrich, executive director of Kansas Advocates for Better Care, recently presented the group’s Caring Award to Kathy Greenlee, assistant secretary for aging at the U.S. Department for Health and Human Services from 2009 to the end of July of this year. (Photo: KHI News Service.)

“That’s common, and there are reasons for it,” says Kathy Greenlee, assistant secretary for aging at the U.S. Department for Health and Human Services from 2009 to the end of July of this year.

“When the discussion turns to aging issues, the big, macro issues — Social Security and Medicare — are the first to come forward. And they are so weighty, they tend to bog down additional conversation,” she says. “It’s easy to shy away from going into the weeds.”

Greenlee, who recently accepted a position as vice president of aging and health policy at the Center for Practical Bioethics in Kansas City, says she hopes to reroute some of the conversation.

“I wish it could be about what it’s like to be an older person in this country and what types of supports are needed for them and their caregivers to live meaningful lives,” she says. “I believe we’d be richer for having that discussion.”

Before joining the Obama administration, Greenlee, 56, was secretary of aging in Kansas for three and a half years. She also served as the state’s long-term care ombudsman and ran the Senior Health Insurance Counseling for Kansas program.

Editor’s note: Reporters from the Topeka Capital-Journal and KHI News Service collaborated for a six-month exploration of how the state’s legal system deals with people with mental illness. This is the first in a four-part series.

America has a long history of criminalizing mental illness.

Well into the 20th century, courts, not clinicians, committed people with mental disorders to state hospitals, where too often they were warehoused and received little if any meaningful treatment.

A report written in 1948 for the Kansas Board of Health titled “A Study of Neglect” concluded that “a seriously mentally ill person (in Kansas) is almost a criminal before the law.”

The report — written by Harry Levinson, a psychologist of national stature who began his career at the Menninger Clinic, and two colleagues — also noted that more than one-third of the approximately 46,000 Kansans who had entered state mental health hospitals between 1866 and 1946 had died in them.

The Levinson report and another issued about the same time by a special commission formed by former Kansas Gov. Frank Carlson that included Dr. Karl Menninger prompted the first of several sweeping reforms of the state hospitals and the mental health system in Kansas.

Iowa is home to some of the richest farmland in the country, but the Des Moines Water Works says that has come with an environmental price. The city water authority has filed a lawsuit against three rural counties claiming that nitrate from fertilizer is contaminating their urban water supply. Special correspondent David Biello reports for Detroit Public Television.