A Quick, Clickable Roundup Of Health News From Our Region — And Beyond — For The Third Week Of June 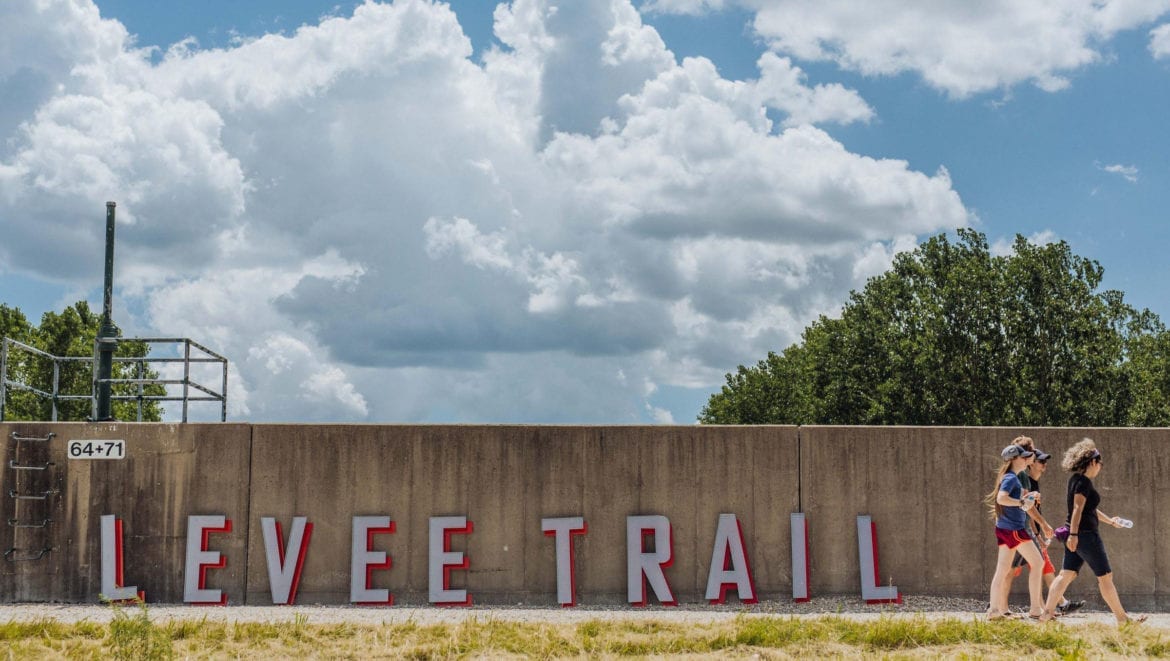 Trail supporters propped up letters on the wall of part of a proposed levee trail in Kansas City, Kansas, although they haven't yet received permission to mount them. (Photo: Matt Kleinmann | Community Health Council of Wyandotte County)
Share this story

Standing at the meeting point of the Kansas and Missouri rivers, you can still get a glimpse of what Lewis and Clark might have seen when they camped here 212 years ago: vast skies, tall trees, wide, shimmering rivers, even the occasional eagle.

“It’s really a unique slice of nature in the middle of our cities that’s pretty amazing and a great opportunity for people to get away from the city, in a sense, right in the middle of the city,” Behrens says.

Behrens and other cycling and fitness advocates want the community to be able to take advantage of the rivers and surrounding nature. They’re trying to open public access to the levees in Kansas City, Kansas, for cycling, walking and jogging.

To do so, however, they’ll have to overcome circumstances that have shaped this part of the city for decades.

— Alex Smith is reporter with KCUR, a partner in Heartland Health Monitor, a reporting collaboration that also includes KCPT and KHI News Service, an editorially independent initiative of the Kansas Health Institute.

In 2014, opioid abuse accounted for more than 28,000 deaths in the United States, according to the Centers for Disease Control and Prevention.

Missourians accounted for more than 1,000 of those deaths, according to Sen. Roy Blunt of Missouri, and last week a bill negotiated by Blunt and approved by the Senate Appropriations Committee hiked federal funding to combat opioid abuse to $261 million, a 93 percent increase over last year’s amount.

Rural areas have been hit particularly hard by the opioid epidemic, and President Obama recently asked Agriculture Secretary Tom Vilsack to oversee an interagency task force charged with combating the problem. On Monday, KCUR spoke to Vilsack, a former governor of Iowa, about the initiative. The interview has been slightly edited for length and clarity.

The Glenwood Arts theater is currently screening the documentary “Vaxxed: From Cover-Up to Catastrophe,” which was withdrawn from the Tribeca Film Festival in New York earlier this year amid an uproar over its thesis: that there’s a link between the mandatory measles, mumps and rubella (MMR) vaccine and autism, and that health authorities have conspired to cover it up.

The supposed link has been widely debunked, but the co-owner of the theater, Brian Mossman, says he’s showing the film because customers asked him to and “if it opens up a dialogue on the subject, I think that’s a good thing.”

Mossman acknowledges he hasn’t seen the movie, but he says “the biggest interest I have is what exactly did the CDC cover up.”

Known as “fail first” or “step therapy,” the policy requires providers participating in KanCare, the state’s privatized Medicaid program, to start patients on less expensive drugs before moving them to more expensive alternatives if medically necessary.

“Taking prescribing out of the hands of doctors and putting it in the hands of administrators and people who are trying to make a profit is not good for patient care,” said Dr. Donna Sweet, a professor of internal medicine and a clinician at the University of Kansas School of Medicine-Wichita, where she focuses on treating patients with HIV and AIDS.

Advocates for Kansans with mental health disorders are particularly concerned even though legislators who pushed for the change say they needn’t be.

Published on Jun 9, 2016
When the Ebola outbreak struck West Africa in 2014, it took months for international agencies to funnel money into the affected areas. Eventually, more than 11,000 people died and the economic cost topped $10 billion. Now, the World Bank is creating a fast-disbursing fund to combat pandemics as soon as they unfold. Hari Sreenivasan talks to bank president Jim Yong Kim to learn more.