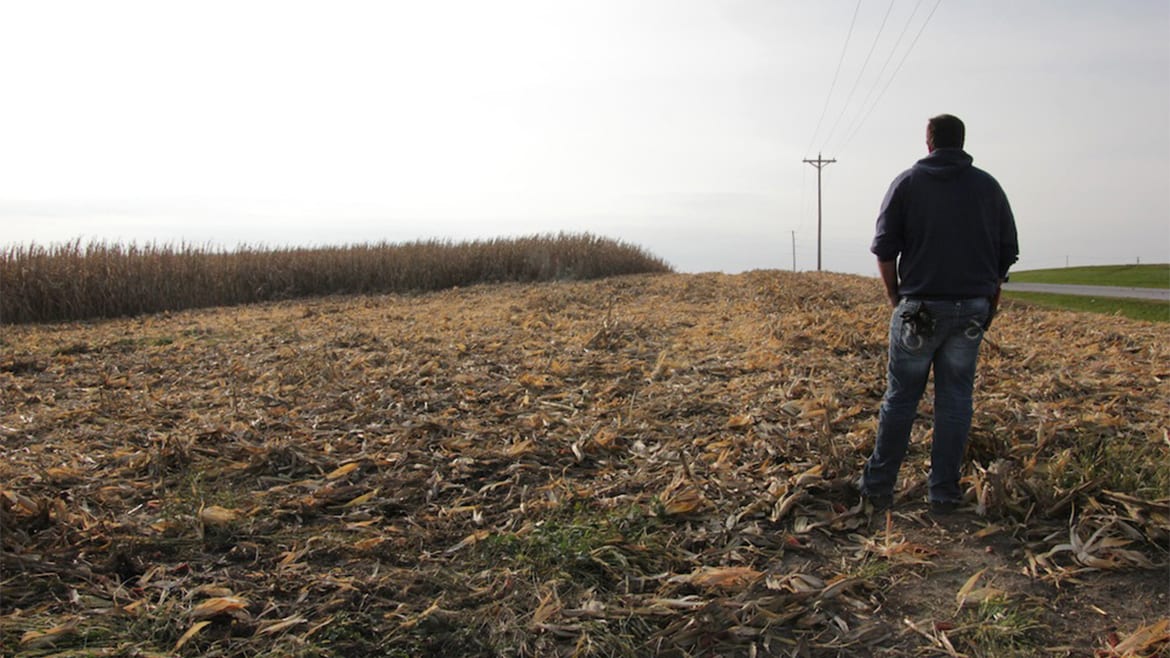 Like many beginning farmers, Grant Curtis wants to invest in his operation but expectations of low prices are tying his hands. (Abby Wendle/Harvest Public Media)
Share this story

Grant Curtis remembers the day he went shopping for his first tractor.

“It was an eye opening experience,” he said. “Walking into a dealership, getting the prices, walking back to the bank and pleading my case. Saying, ‘I want to get back to the farm, but I need a way to do that.’”

Curtis, in his early twenties at the time and without farmland of his own, joked that the only thing he offered as collateral was sweat. But grain farming is a seriously expensive business.

Aspiring farmers can’t expect to earn a living simply working for their family’s operation. In order to “get back to the farm,” as Curtis put it, the next generation of farmers typically have to buy their parents out of their plot or be among a lucky few that finds reasonably priced fields.

In other words, they have to invest.

Record high grain prices the past few years have given beginning farmers a rare opportunity to do that.

This year’s prices are sobering in comparison. With corn selling for nearly half of what it did in 2012, grain farmers are in the midst of a downturn and it’s hitting beginning farmers, like Curtis, hardest.

“We were all spoiled little brats the past two years,” Curtis said.

Nathan Kauffman, an economist with the Federal Reserve Bank of Kansas City, said new operators are vulnerable because they have less cash, fewer assets, and more debt.

“Farmers that have been doing it for a while have stronger balance sheets,” Kauffman said. “They’re able to weather the storm a bit longer.”

Beginning farmers, on the other hand, are already experiencing the consequences of smaller paychecks.

Curtis, for instance, is feeling the weight of debt and the restraint of not being able to invest during what should be a crucial time of business growth.

For over a decade, he’s managed about 1,500 acres of corn and soybeans for Curtis Family Farms, his parents’ operation in Sciota, Ill.

When times were good, he ran up a line of credit and took out several loans to pay for land, seed, fertilizer, chemicals and equipment. He also installed drainage tileto improve the land’s fertility – which he hopes will translate to more profit in the future.

But this year, Curtis won’t be able to put money into the farm. He said he’ll barely earn enough to cover the basics.

“Those extra dollars that were available aren’t going to be available for this year,” he said. “That money is going to have to go to paying down the debt. In addition to putting in a crop for next year.”

Not being able to afford to invest has Curtis worried about his long term role on the farm. In order to continue full-time, he needs to grow the operation into a self-sustaining business.

And that takes more land.

Curtis owns 80 acres and cash rents another 80 acres, which means that even though he has fewer dollars coming in, he still owes a fixed fee to his landowner. He said he hasn’t set a date, but he plans to have a conversation soon about lowering the rent.

“It’s an awkward situation to be in,” he said. “It would be like asking for a lower rent at your house because you had to get another job because you were laid off.”

The majority of the land Curtis works is owned by his parents, who pay him to farm it. It’s where he makes 70 percent of his income. If the downturn persists, Curtis will be forced to do what a lot of beginning farmers have already done: take an off farm job.

“If that was the only way I could continue, it’d be no question that’s what I’d do,” he said. “But that’ll be a tough decision to have to make because my passion is here at the farm.”

Drue Calvert doesn’t have the luxury of choice. He considers himself a farmer, but he doesn’t earn enough selling corn and soybeans to support his family, so he works as a Munson Hybrids seed salesman.

At harvest time, instead of heading out to his field, he hops into the company truck, a red pick-up with a big “M” logo and an ear of corn painted on the hood, and drives around rural Illinois visiting customers.

He said he enjoys the work, but more than anything, he wants to quit and farm full-time.

“That’s my biggest goal, to be self-employed,” he said. “I mean, that’s what I wake up thinking about.”

He currently rents 200 acres of his dad’s land in western Illinois and farms it in his free time, borrowing his dad’s equipment.

Last year, Calvert’s dad came to him to discuss transferring over more ownership of the farm. But when Calvert brought it back up, his dad told him this year’s no good. He didn’t want to pass on more risk to his son while times are tough.

Calvert, who’s wanted greater ownership of his dad’s operation for more than a decade, said these kinds of delays are frustrating. But they’re also an opportunity to cultivate patience.

“Ten years ago, I would argue,” he said. “But I’ve realized, he’s put a lot of time in to get to where he is. And maybe if things are where he wants them to be, then I should just appreciate that and hope I get there one day, too.”

Patience might be a good quality to have going into 2015, with some economists predicting that profit margins will be even lower.