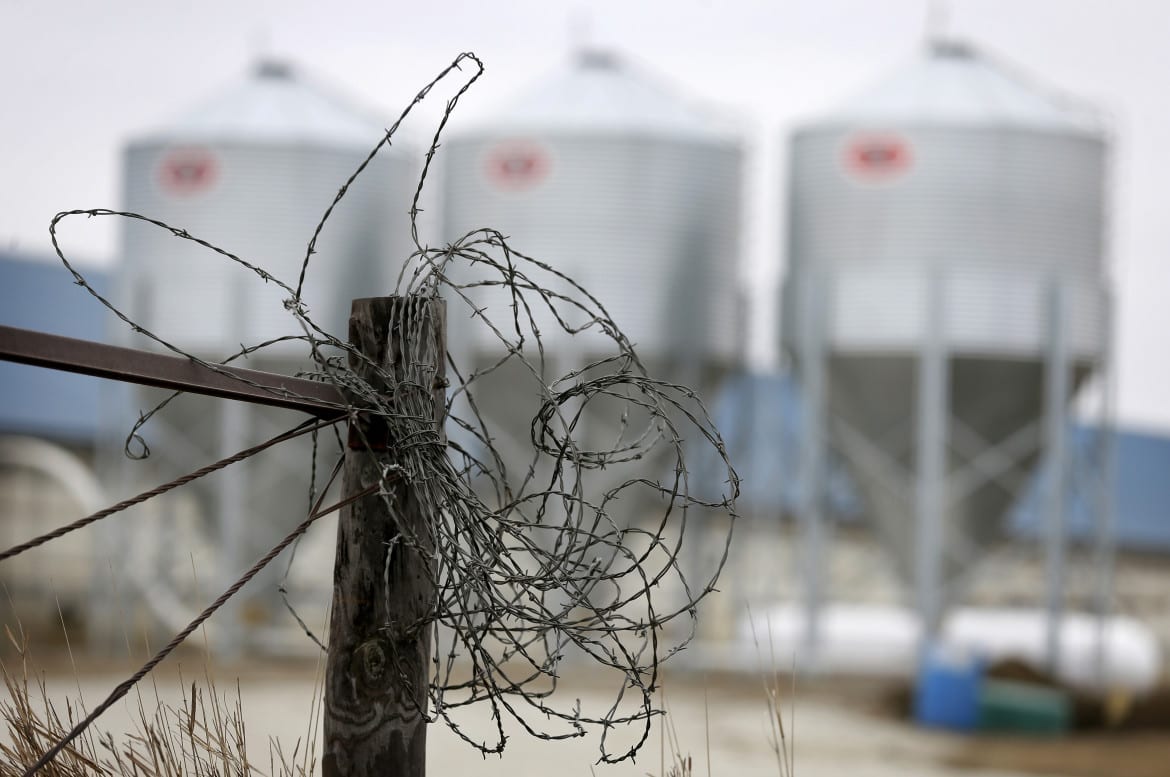 In this Thursday, Jan. 22, 2015 photo, barbwire hangs bundled up on a fence post near a hog confinement facility, near Orient, Iowa. From Washington state to North Carolina, federal lawsuits are challenging the livestock industry to change its ways, based on studies that increasingly show the impact phosphorous, nitrate and bacteria from fertilizer and accumulated manure have on lakes and rivers, as well as air pollution caused by particles that are harmful to respiratory health. (Photo: Charlie Neibergall | AP)
Share this story

A global effort is underway that may change the way we look at waste from farm animals. China, Brazil, Costa Rica, and India, along with others, are all developing new technologies that use biodigester systems that essentially convert cow and pig manure into clean, renewable energy.

Here in the United States, Smithfield Foods, the largest pork producer in the nation, along with Roeslein Alternative Energy (RAE) recently announced a project to convert hog manure into natural gas by placing large impermeable covers on top of manure lagoons and harvesting the trapped methane gas that permeates from the hog waste.

The companies have announced the construction of phase one of an $80 million anaerobic digestion system, a technology that could potentially revolutionize the hog industry.

On typical hog farms, manure is washed out from underneath the animal pens and then piped into an anaerobic lagoon, a man-made pit sometimes five acres wide. Once the manure is dumped into the lagoon, the manure separates into two layers, a semi-solid sludge on the bottom and a liquid layer on top.

The liquid layer is pumped from the lagoon and distributed across several acres of designated land. The bottom layer of manure sludge then breaks down through a process of anaerobic respiration becoming 60 percent methane biogas and 40 percent Carbon Dioxide. 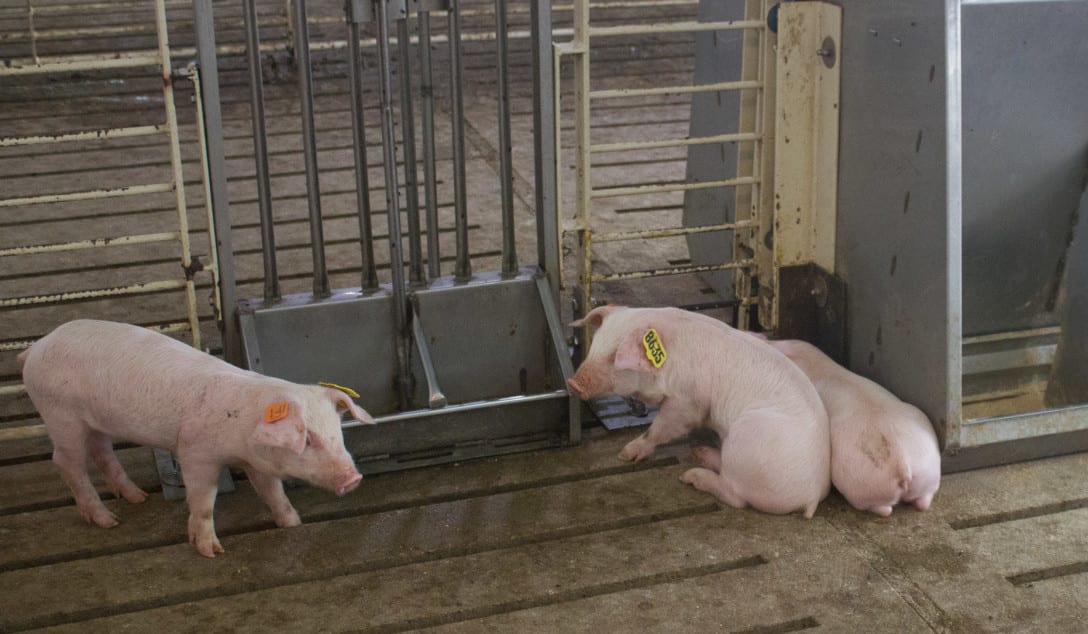 But this system creates many challenges. First, anaerobic lagoons contain and emit substances which can cause harmful environmental and health effects. These substances are emitted through two main pathways: unrestricted CO2 gas emissions that rise into the atmosphere from the open air pits and lagoon overflow caused by faulty lagoon infrastructure and heavy rains that cause the lagoons to flood.

Then, there is the smell. The odor that comes from the liquid and sludge has led to Smithfield Foods having to repeatedly fight neighboring farms who file nuisance lawsuits over the smell, claiming the stench is so powerful that the property value of their homes has been greatly reduced.

“The technology we have developed is ready to be deployed commercially in a project that makes both economic sense and environmental sense,” said Rudi Roeslein, president of RAE. “This is not just about converting the manure from almost two million pigs into renewable energy. It’s about taking environmental sustainability to a new level,” he said.

At an October press event at Smithfield Foods’ Ruckman Farm in Albany, Missouri, one of the nine Smithfield Foods Missouri hog production facilities involved in the project, Roeslein was optimistic his company has developed a system that may fix all of these issues and in the process, create a stream of renewable energy.

Here’s how it works: First, large tarps are placed over the lagoons. This serves to trap the CO2 and methane gas from escaping into the atmosphere. As the methane rises to the top, it is collected, filtered and converted into 98 percent natural gas. The remaining biogas is then burnt off. The harvested, almost pure natural gas is then pumped into a natural gas pipeline and sold to energy companies who can use the gas in a variety of ways, most notably diesel fuel.

The tarps also serve to keep heavy rains from flooding the lagoons and prevent runoff. Since flooding is thereby seemingly eliminated, the surrounding land is unsusceptible to overflow and can eventually be restored to its natural prairie state.

The tarps seem to do a pretty remarkable job of containing the odor of five acres of hog manure. Standing 10 feet from a lagoon, the smell is far from overwhelming and a mile away from the farm, a distance neighbors might live from a hog farm, the smell seemed non-detectable.

“Smithfield, because of their vast wealth, simply has the resources to do what other small farms can’t do.” – MU Professor Tim Safranski

It is an idea that actually is more than 40 years old, says Tim Safranski, a University of Missouri’s professor of swine genetics and reproductive management.

“This was actually done here at the University of Missouri with the energy crisis of 1973,” Safranski said over the phone from Columbia, Missouri. “But what we demonstrated at the time was, while the science was sound, the practicality of it was not cost-effective and therefore the idea was scrapped,” he said.

Now that Smithfield is backing RAE financially, Safranski says the idea may become more of a reality than a science experiment.

“Smithfield, because of their vast wealth, simply has the resources to do what other small farms can’t do,” said Safranski. Such as building the biodigesters, which cost about a million dollars apiece.

RAE Director Chris Roach admits that the system is designed for large-scale operations and not for a small hog operation. However, bringing this to the local farm is something that “remains an objective for RAE,” said Roach.

“Yes, we are starting with large farms – well, we are starting with Smithfield, which is the largest,” says Roach. “But we want to take this project and the lessons that we learn and do them at a smaller scale and bring them to the smaller operations and hopefully make a much bigger impact across the industry,” he said.

It is also unclear how far Smithfield is willing to take this. Smithfield is the largest hog farm producer in the world, with facilities in 26 states, 11 countries, and an estimated $13 billion in sales per year, according to the Forbes Global 2000 list.

But the company is testing Roeslein’s tarp system on only nine farms in Missouri and has not committed to doing this on all of Smithfield’s farms worldwide.

Meanwhile, Smithfield has a terrible environmental record. Most recently, in 2013 Smithfield got into trouble when it flushed 2.3 million gallons of toxic waste into the North Carolina water systems. The company’s is a storied past that includes multiple infractions against the environment, according to a study by Food and Water Watch. Smithfield has also vigorously fought against local farmers that have tried to fight against the smell that permeates from their farms.

Blake Boxley, Director of Environmental Health and Safety at Smithfield Hog Production, was vague when it came to Smithfield Foods’ record.

Roach stressed this was a work in progress, as the  system is only halfway realized and will not be fully operational until next July. While the company’s efforts with Roeslein Alternative Energy sound promising, it remains to be seen whether this effort marks a change in Smithfield’s operations and what the impact will be on the rest of the industry.