‘No Bees, No Food’ – Missouri Group Pushing for State Ban on Bee-killing Chemicals

Buzz Kill Believed To Be Linked In Part To "Neonics" 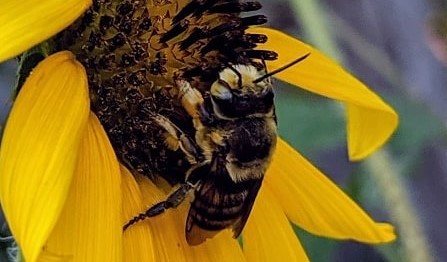 A Missouri environmental group is seeking statewide support for proposed legislation that would ban the use of a class of insecticides believed to be contributing to a decline in the population of honeybees.

Environment Missouri’s “No Bees, No Food,” campaign sent canvassers across Kansas City this summer, collecting signatures in support of a ban on the insecticides called neonicotinoids, often referred to as “neonics.” The group is asking state lawmakers to craft a measure that would ban the sales of seeds coated in neonics – a common practice for corn and soybean seeds – and would bar retailers from selling neonic insecticides to consumers.

The group has collected thousands of signatures in support of its campaign from residents in St. Louis and Kansas City, according to Environment Missouri Director Bridget Sanderson.

“People are very supportive of the bees,” Sanderson said. “Most people understand that bees are dying off but they are not really sure why and they don’t know how important bees are to the food supply. We’re going door to door to educate Missouri voters.”

The action is patterned in part after a “pollinator protection” measure passed in 2016 in Maryland that bans sales of consumer bug killers made with neonics.

Honeybees pollinate crops that produce roughly a quarter of the food consumed by Americans, including apples, almonds, berries, and melons. Their function in food production is valued at approximately $20 billion and is so critical that many commercial beekeepers make a living trucking their managed hives around the country to farm fields for pollination purposes.

Nationally, there are roughly 2.6 million bee colonies in the United States, down from an estimated 4 million in 1970 and 6 million in 1947. California has the largest number of colonies at more than 1.1 million. Missouri has far fewer – about 8,500 managed bee colonies, according to the U.S. Department of Agriculture.

The stark declines in bee populations have sparked widespread concerns in government, academic and farm circles. Researchers at the University of Maryland reported this June that U.S. beekeepers lost 40.7 percent of their colonies between April 2018 and April 2019, an elevated rate of loss that is part of the worrisome trend, according to the researchers.

Evidence has been building for several years tying the use of neonics to the loss of bees and other insects important for biodiversity and environmental health. The neonics that are coated onto seeds to protect them from soil pests are absorbed by the growing plant and spread through plant tissue, exposing the bees as they seek nourishment. Scientists additionally have found that bees are exposed to neonicotinoids not only when they forage on crops treated with neonics but also as they gather nectar and pollen from plants in untreated areas because dust contaminated with neonics often drifts from fields where neonics are used.

In the face of such evidence, European regulators have banned all outdoor use of certain types of widely used neonicotinoids because of the risks they pose to bees. And in May, the U.S. Environmental Protection Agency (EPA) announced it was canceling registrations for 12 neonic products used in agriculture; the cancellations were part of a settlement of litigation brought by environmental groups. More than 40 neonic products remain commercially approved.

Widespread use of neonicotinoids is only one of the factors thought to be driving the bee declines. Extreme weather conditions, disease and pests called varroa mites are seen as threats to bee health as well.

Kansas City beekeeper Dave Albrecht understands that there are a mix of factors impacting bee declines and he agrees that mites and other pests are a big problem for bees. But he also believes neonics contribute to the problems and should be more restricted. Albrecht only manages a few hives, some in his Brookside backyard and some located in rural Missouri near corn and soybean fields, but he said his city bees generally fare better than those near farm fields.

“Bees and their power to pollinate so many different kinds of crops and so many kinds of flowers outweighs the interests of particular pesticides,” Albrecht said.

Sanderson said there is little the average voter can do about mites or weather problems for bees. But voters can help improve the sustainability of bees by blocking neonics.

“We know neonics are killing bees off. And we can actually control the neonics,” she said.

It’s no easy task to seek to ban pesticides in a state that was long home to Monsanto, a leading agricultural company that used neonics for coatings it seeds, Sanderson said. That task has been made perhaps even harder by the fact that the German company Bayer AG, a major seller of neonics, acquired Monsanto last year and now is a major Missouri employer. Both companies are known for their powerful state and federal lobbying efforts against measures that threaten sales.

Bayer acknowledges the importance of bees and other pollinators to food production and has initiated a number of projects aimed at promoting bee health and habitat. It has invested $1.3 million into a “Healthy Hives 2020” plan, for instance. But the company rejects what it calls “unsubstantiated claims” that neonics cause honeybee decline.

“By all objective measures, the evidence shows no relevant long-term impact of neonicotinoids on colony health, whereas there is substantial evidence linking other factors, such as the spread of the parasitic Varroa mite and its associated diseases, to colony declines,” Bayer states.

The company is adamant that its neonic products “do not represent a long-term threat to bee colonies when used as directed by the product labels.”

Sanderson said despite what is likely to be formidable opposition, her group is committed to a long-term battle for a ban.

“We know it’s possible,” said Sanderson. “We have a bit of a different situation than Maryland with Monsanto and Bayer being in our backyard. But we still think it’s possible.”

Carey Gillam is a Kansas City-based journalist and author, and a public interest researcher for US Right to Know, a not-for-profit food industry research group.