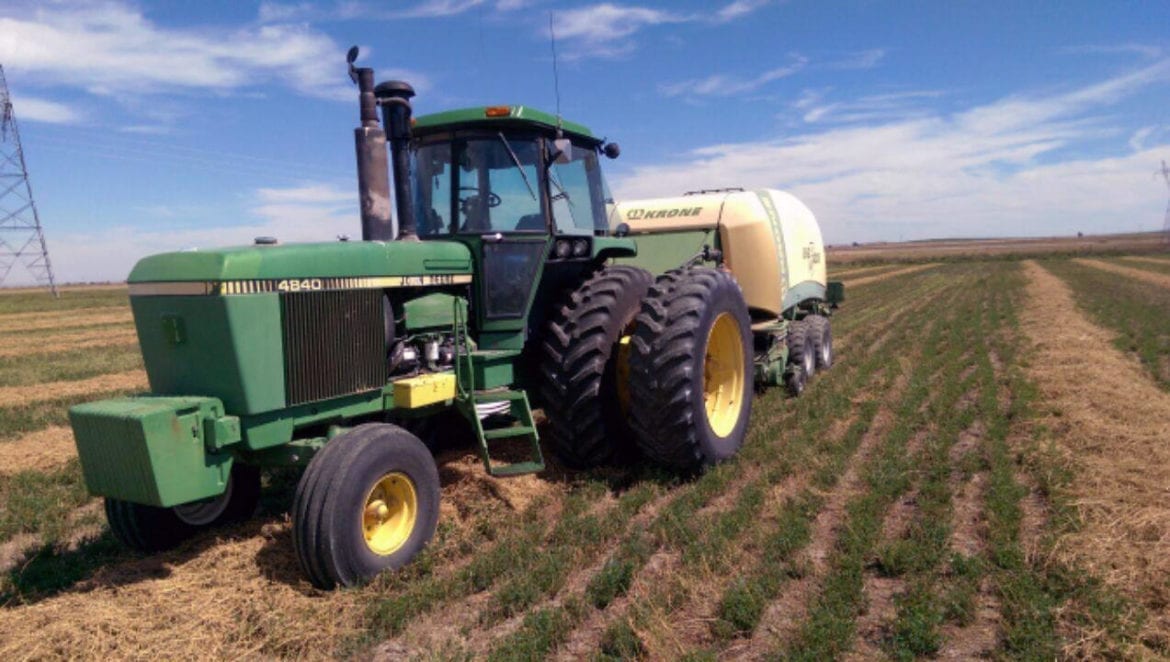 A tractor owned by Nebraska farmer Elliot Chapman stands in a field of alfalfa. Chapman had to sell most of his equipment after experiencing financial trouble. (Contributed | Elliot Chapman)
Share this story

Farmers across the Midwest are trying to figure out how to get by at a time when expected prices for commodities from corn, to wheat, to cattle, to hogs mean they’ll be struggling just to break even.

“Prices are low, bins are full, and the dollar is strengthening as we speak and that’s just making the export thing a little more challenging,” says Paul Burgener of Platte Valley Bank in Scottsbluff, Nebraska.

Burgener says the problem is oversupply. Farmers responded to booming prices in the early part of the decade by planting more crops and improving their land. Soon, crop production outpaced demand.

“We did what most people would do if they had a factory and had a lot of demand: you expand,” says Brent Gloy, a Purdue University economist who also farms in southwest Nebraska.

American farmers aren’t alone, Gloy says. Farms have been expanding across the globe.

That is roughly equal, Gloy says, to the number of soybean acres farmed in the United States each year. With high levels of land in production, the current low grain prices will have staying power, as long as the weather allows good growing conditions.

Because prices for grain and livestock are lower, farm income in the U.S. has declined three years in a row and the increasing strain on farm businesses has been documented by the Kansas City Federal Reserve. Land values are down. Farm debt continues to rise. More bankers report they expect some farmers to have trouble paying off their loans.

The farms with the most debt are expected to be the first to run into trouble. That often means new farms borrowing money to get started, but also includes farms that borrowed money to buy land or livestock when prices were high.

“Anybody who was in a growth mode,” says Brad Lubben, an agricultural economist at the University of Nebraska-Lincoln. “More acres that are perhaps cash rented. More machinery. More inputs.”

But if today’s hard times sound like a repeat of the 1980s farm crisis, Lubben and other economists who spoke to Harvest Public Media say not to draw too many parallels. Despite years of low prices, the farm economy as a whole should be able to weather the storm.

“It’s difficult to call this a ‘crisis,’” Lubben says. “It’s certainly a concern.”

To manage the downturn, farmers will have to cut costs on big-ticket items like fertilizer, land rent and machinery, Lubben says. Many farmers, economists say, were able to add to their rainy day funds when times were good, which will help them to ride out hard times and buoy the outlook of farm economists.

“Farmers went into this downturn of income following some record years in the crop sector and, more recently, the livestock sectors,” says Damona Doye, an agricultural economist at Oklahoma State University. “So there was hopefully a lot of cash reserves built up”

Despite continued downward trends for indicators like farm income and land values, economists still believe farm failures will be isolated.

“The number of producers who are truly in financial stress with impacts on their operations is a relatively small percentage,” Lubben says.

Unfortunately for Elliot Chapman, he is part of that small percentage.

Chapman, 25, chose a hard time to start a farm even though it seemed like the best time. It was 2013. Grain prices were coming off of historic highs. He was farming with his dad and uncle near the town of Lyman, Nebraska, on the Wyoming border, but decided to strike out on his own to raise corn, alfalfa and dry edible beans.

“I was living the life,” Chapman says. “Ever since I was a little kid I always wanted to do what Dad did.”

Farming, however, is an expensive business. New farmers rarely have money set aside. Chapman borrowed $94,000 to buy a few tractors, a semi, a combine, a hay baler and other equipment he needed, even if most of it was 30-years-old. He also took out a loan to buy seed, fertilizer and fuel.

“Holy cow, was I in deep after that,” Chapman says.

“It was just that first year when things tanked. I mean the last year was good then, man, it almost went straight down,” Chapman says. “It was hard.”

Last spring when Chapman went back to the bank to renew his loan, he was told he no longer qualified for credit.

Chapman was out of money to farm, but still had a debt to pay. His answer to that problem was mediation. Farm states created mediation programs after the ‘80s farm crisis to help farmers avoid foreclosure and prevent the kind of mass bankruptcies that tore through rural areas. In Nebraska it’s the Negotiations Program.

Mediation does not mean loan forgiveness. Chapman still owes the bank its money, but the plan they came up with helps him work through his debt while keeping his family’s land. Now, he works at a county roads department and does freelance farm work on the side. Someday, he hopes to start his own farm again.

“The biggest thing for me is I was able to keep the family farm in the family,” Chapman says. “I didn’t want to be the guy who lost the family farm. That was always my worst nightmare.”

There is a downside to record-breaking harvests. Prices for commodities like corn and wheat are at their lowest point in a decade. Watch this video for a farmer’s perspective.