A proposal that would jumpstart the chicken business in Nebraska has some residents concerned about the potential impact on the environment and are trying to block or delay its construction.

Costco, the warehouse retailer and grocery chain, plans to build a giant $300 million chicken slaughterhouse on the south side of the town of Fremont in eastern Nebraska.

To make sure the plant is humming year-round, Costco wants new farms around Fremont to raise 17 million chickens every year. As of the 2012 Census of Agriculture, there were less than 1 million broilers – chickens raised for meat – in the whole state.

When a new meat plant comes to town, it can mean big business, and this one would surely be a boon to many farmers looking for new revenue sources in a down economy. It would also be a customer for locally raised corn, some 350,000 bushels per day. But it also brings with it concerns about environmental impact.

Randy Ruppert opposes the project as part of the group Nebraska Communities United. He doesn’t want the roads crammed with truck traffic or smelly chicken barns dotting the countryside. The groups is also concerned about unfair farm contracts.

Mostly, however, the group is concerned with litter – a compost of manure, feathers and bedding – the chickens will leave behind and its impact on local water supplies.

“Millions of pounds of chicken litter every year that will be spread on our fields as fertilizer,” Ruppert says. “Our concern is the increased nitrogen levels and the phosphorous levels that are going to be put into our waterways here.”

Farmers can spread chicken litter on their fields as fertilizer to help grow their crops. The litter can replace expensive synthetic fertilizer and add organic matter to the soil.

Nutrients from manure, however, can run off into rivers or leach into groundwater. That’s in part how the Chesapeake Bay in Maryland became polluted.

Hog manure in Iowa contributes to the high nitrate levels threatening the Des Moines water supply. At high levels, nitrates can cause so-called blue-baby syndrome, a potentially fatal condition in which the blood cannot carry enough oxygen. The Des Moines Water Works must remove nitrates from the water to keep it under the U.S. Environmental Protection Agency’s regulatory standard of 10 parts per million.

“Will one plant bust the bubble? Don’t know,” Ruppert says. “But the bubble will bust as it did in Iowa.” 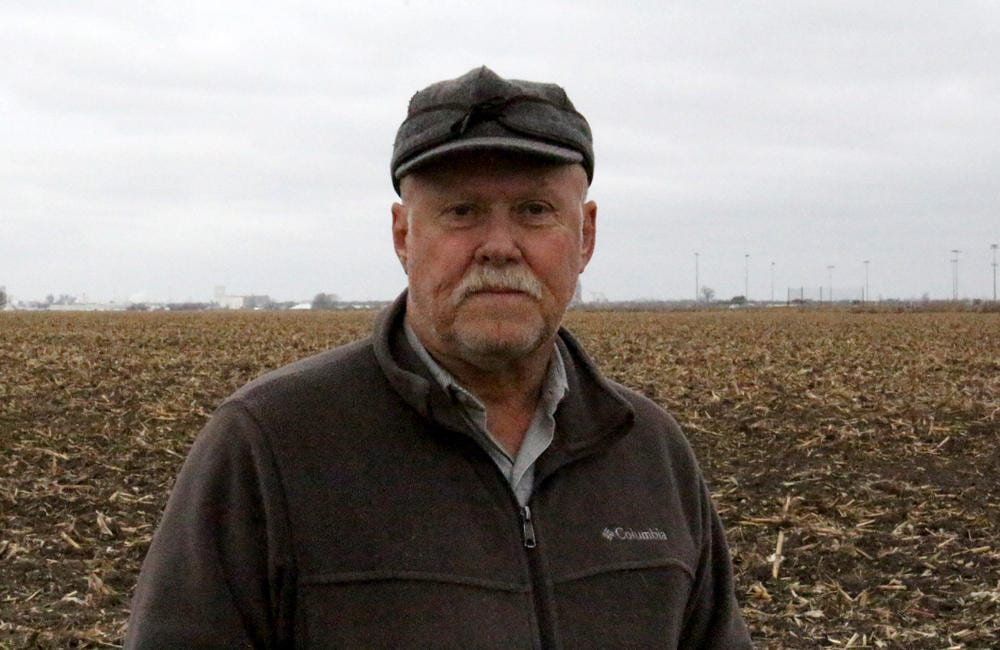 The Fremont chicken plant has financial appeal to many area farmers. Lincoln Premium Poultry, the company leading the Costco project, says more than enough farmers have shown interest in raising chickens. A contract to grow poultry could provide a much-needed income stream in a time of low grain prices. And the company says farmers who sign a contract will be asked to go beyond the letter of the law to minimize the impact on the local water supply.

For example, each chicken farm will have to acquire a permit from the Nebraska Department of Environmental Quality, which is not required by law.

“D.E.Q. does not require it,” says Walt Shafer, project manager for Lincoln Premium Poultry. “We are going to require it.”

Farmers under contract to grow chickens will also have to follow a nutrient management plan, Shafer says, and the farmers will be audited and graded by the company each year.

“That is beyond what is required of our producers,” Shafer says. “In essence, they’ll know how much litter to apply, where to apply it, when to apply it, how to store it, the cover crops on the ground, and it will be substantiated by soil testing.”

Shafer hopes to break ground on the processing plant in the spring, after all of the designs are complete, permits are granted and Costco gives the final go-ahead. Lincoln Premium is currently submitting permit applications to the state. Costco did not respond to an e-mailed request for comment for this story.

Fremont is an ideal location for the chicken project, planners say, because there is plenty of corn for feed nearby. But it is also close to the state’s two largest cities. About 5-10 miles along the Platte River from where the Costco chicken plant would sit, you’ll find well fields that supply drinking water to Omaha and Lincoln.

The Metropolitan Utilities District in Omaha and the Lincoln Water System both say they are closely watching the development of the Costco project, but aren’t worried about a direct threat to the cities’ water supplies. The nitrate levels in the Platte River are generally low, they say, and the wells provide a layer of protection.

“We get a lot of natural attenuation, or natural treatment, through all of those sand layers that the water flows through,” says Steve Owen, water production manager for the Lincoln Water System.

Owen says the sand and gravel act like a filter, which is a big difference from Des Moines’ system that takes its water straight from the nitrate-heavy Raccoon River.

But Alan Kolok, a biologist at the University of Nebraska at Omaha, wonders how much pollution that natural filter can handle. Kolok studies water quality on the Elkhorn River, which also flows near Fremont. He says that river already shows spikes in nitrate and phosphorous levels when it rains in the spring.

“There will certainly be a saturation point in the natural filter to filter out contaminants,” Kolok says. “And when it supersedes that, then those contaminants can very well end up in the drinking water supply.”

It’s up to the water utility to test and treat the local water to ensure it’s safe.

Kolok says these are the issues that come with raising livestock to feed our hunger for meat in the 21st Century. It’s just that Costco, and the residents of northeast Nebraska, are next in line to face the question of how to deal with them.