How technology is drastically changing one of the Midwest's biggest industries 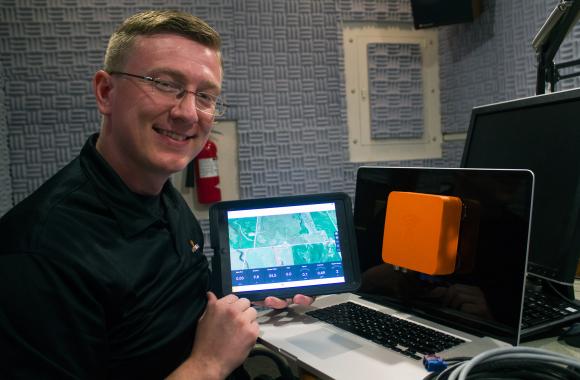 Heath Gerlock, a founder of Farmobile, shows the orange box device that can feed farm data directly to a tablet, smartphone or computer. Gerlock pictured in the Iowa Public Radio studio in Ames. (Amy Mayer/Harvest Public Media)
Share this story

Listen to the story:

Technology has transformed farming, one of the Midwest’s biggest industries, and while fewer people are now needed to actually work the farm field, new types of jobs keep many office workers tied to agriculture.

Beyond operating a tractor and a combine, today’s farmers need to manage all kinds of information. From information technology to web development, the skills that have changed our economy have transformed the agriculture industry as well.

Take Heath Gerlock, for example. He grew up on an Iowa farm, but had been away for 10 years working in website and software development. Then a call from his brother, who was working the farm, lured him back. Sort of.

“My brother called me and asked me if I could set up a website where farmers would pay $1,000 a year to find good deals on hybrid seeds,” Gerlock said. “I said to him immediately, ‘I could do that, but why would I do that?’”

The idea was that collating data for farmers would save them time and money by making it easier for them to get the best deal. Gerlock didn’t pursue his brother’s specific idea, but it got him thinking about merging his high-tech world with his family’s farm.

Huge companies and start-ups alike are investing in technology designed to support and improve agriculture and, in the process, they’re creating new jobs. Gerlock and his business partners founded Farmobile, a company that offers farmers an orange, 5-inch square, data-collecting box. Gerlock says it attaches to almost any type of equipment and allows for real-time recording of everything from miles driven by a tractor to fuel consumption to yield.

Gerlock says the data itself is useful to farmers, but his company’s real goal is to make the farm data another commodity producers can sell for a profit. For now, Gerlock drives from his home in Omaha all over the Midwest promoting his product.

As ag-support businesses spring up, farm country knowledge is at a premium. Coming from a farm family, Gerlock says, gives him an edge.

“There’s a notion of wanting to preserve the spirit of what makes agriculture so wonderful, and the industry is so driven by trust, it’s so driven by relationships, hard-working people,” Gerlock said.

And because they’re working so hard, those people can’t always take on additional duties that crop up. These days, many farms are multimillion dollar businesses, but are often run by just a couple of family members without the managers and executives that other businesses might have.

“Our producers get so much data and so much communication beyond just how to produce pigs, that they can’t manage it,” said Karen Kerns, who runs a business consulting firm focusing on the agriculture industry. “It’s not enough for them to be great producers anymore.”

Kerns and her husband run Kerns and Associates in Ames, Iowa, which offers producers a menu of professional services such as human resources, strategic planning, and even family counseling.

“We actually sit down with them and help them with family dynamics,” Kerns said. “We have some families we work with where people haven’t spoken in 10 years but they work side-by-side.”

What happens on the farm is also now of more interest to people far away. Consumers are demanding to know more about their food—where it comes from and how it was grown or made. That has changed how agriculture companies talk to the public.

At MorganMyers, a marketing firm in Waterloo, Iowa, co-owner Janine Stewart says her firm used to connect agriculture companies to farmers. Now they create more projects aimed at the rest of us, too. Years ago, she preferred to hire employees who, like her, had farming in their background.

“But we also have hired, and are looking for, people who are great communicators, creative-thinkers, people who have an interest in the whole food chain and what’s going on related to that, but they don’t necessarily have to have that farm production background,” Stewart said.

Federal reports show traditional farm labor jobs are on the decline. But work in agriculture-related businesses, especially for those with a college degree, is booming.

“I knew I wasn’t going to be able to go back to the farm because I have two brothers who are going to take over that someday,” said Johnna Decker, who graduated in May from Iowa State University with a degree in agricultural communications. “So I had to kind of segue into what I knew I wanted to do, which was stay true to my agricultural roots.”

After getting into law school, she says she may focus on agricultural law.

“It will be interesting to see where I decide to take my career someday,” she said. “Who knows? I’m still baffled by the amount of opportunities I have.”

Eventually, Decker will likely join the ranks of others who have forged agriculture careers off the farm, filling—or creating—jobs that help farmers get their work done.