Why You Should Care About ‘Big Ag’ Companies Getting Bigger 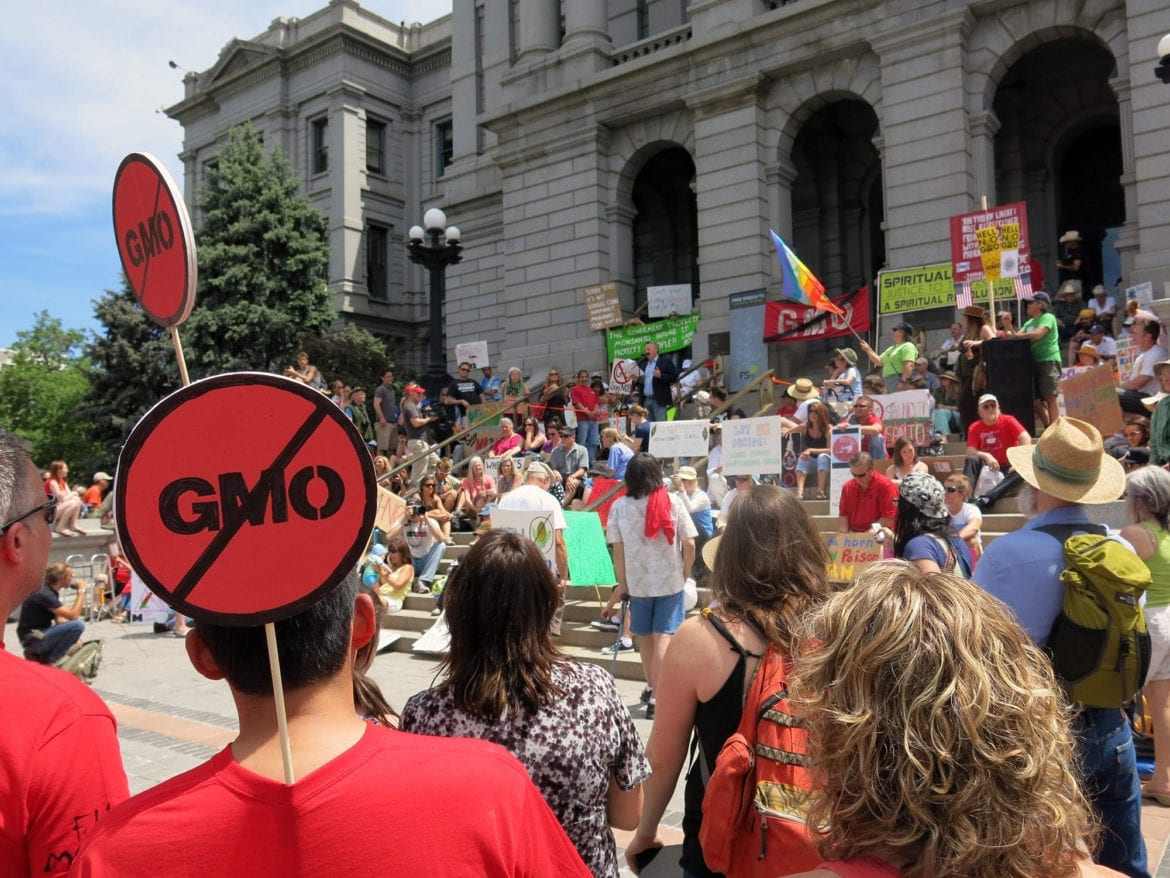 Protestors object to the presence of genetically modified organisms in food at a rally in Denver, Colorado. (Photo: Luke Runyon | Harvest Public Media)
Share this story

Five of the six biggest companies that produce and sell seeds and chemicals to the world’s farmers are pursuing deals that could leave a market dominated by just three giant, global companies. They say getting bigger means bringing more sophisticated and innovative solutions to farmers faster, but opponents say consolidation has irreversible downsides.

Dow and DuPont want to merge and then spin off three separate companies, one of them dedicated to agriculture. Monsanto has accepted an offer from Bayer. And China National Chemical Company, known as ChemChina, wants to purchase Syngenta.

Most Americans aren’t farmers. But these moves would trigger structural changes to the foundations of our food system and impact all Americans, whether or not they buy seeds, fertilizer or herbicides.

Large companies can influence Congress, and some fear that the fewer companies there are in a given sector, the more likely they are to get their way.

“Perhaps the biggest problem,” says Pat Mooney, executive director of the ETC Group in Canada, a think tank that monitors agribusiness and agricultural technologies, “is that the policy makers today have no sense of food or where it comes from any longer. And all of their face-time on the food issues is with the biggest companies.”

That could mean a handful of ag company executives get real sway over policy issues.

“It will be harder for governments to say no to their requests for policy changes,” says Phil Howard, a Michigan State University professor who studies corporate consolidation. “It will be a company that’s too big to fail, like all of those Wall Street banks.”

There are some exceptions in Congress, like Sen. Chuck Grassley, an Iowa Republican from a farming family. Foreign takeovers and anti-competitive moves concern him first because he fears they will increase the price of seeds for farmers who already are struggling to make a profit. But also because he says consolidation of the companies responsible for making food production possible creates a vulnerability for us all.

“The availability of food is very important for social cohesion,” Grassley says, “because of the old saying… ‘You’re nine meals away from revolution.’ In other words, if you can’t feed yourself, or your kids, you might do almost anything to make sure that they don’t starve.”

Will ‘Big Ag’ take on the big issues?

Grassley chairs the Senate Judiciary Committee and recently held hearings to create a public record of what the companies say they plan to do. One after another, Dow, DuPont, Syngenta and Monsanto leaders promised their proposed changes would not stymie competition or development of new products. They pledged to serve farmers even better through increased efficiencies that would allow for greater investment in research.

“With the Dow-DuPont merger, we will bring our capabilities together and we’ll be able to more effectively compete and bring more product choices to farmers,” Tim Hassinger, president and CEO of Dow AgroSciences, testified.

“Our deal will preserve investment in [research and development] and the safety, reliability and diversity in the global food supply,” said Erik Fyrwald, the CEO of Syngenta, about its potential purchase by ChemChina.

Monsanto executives insist that even as they grow through a proposed acquisition by Bayer, they will continue a commitment to finding solutions both through in-house science and by tapping new start-ups and outside talent.

“We have always had the focus on what’s next? What do we do? How can we add more value to farmers? What can we do to create even better products?” Robb Fraley, Monsanto’s chief technology officer, told Harvest Public Media in August. “And I think that’s been a part, literally, of our DNA since the very beginning.”

“The capacity of farmers around the world to crowd-source their knowledge on plant breeding to respond to climate change is huge,” Mooney says. “Farmers work with almost 7,000 different species. Companies work with, I think optimistically, they claim 136 or 137 varieties or species.”

“These guys aren’t going to get us through climate change, for sure, with that kind of focus,” Mooney says.

And despite their promises to better serve farmers, many observers say higher prices for farmers are all but guaranteed.

“It’s really bad news for farmers and everybody who eats because these companies are just going to become more powerful and have even more economical and political influence,” Howard says, “[and] greater ability to raise prices and dampen innovation.”

Regulators in the United States, European Union and dozens of other countries get to weigh in on whether to allow these mergers and acquisitions. Even if some of the biggest countries say yes, important global players like Argentina, Brazil or India could nix one or more of the plans, Mooney says. But he cautions that should the ones currently on the table actually happen, they might lay the groundwork for something even more remarkable.

“If these mergers are allowed to go through,” Mooney says, “then it’s very, very easy to go back to regulators and say, ‘Hey guys, the real way to harness these technologies for the future is to let the farm machinery guys in, they’ve got the box everyone else has to put their products into.’”

If tractor makers such as John Deere, New Holland and others can buy up the seed and chemical companies, Mooney says ultimately farmers would choose one company to supply everything they need and to manage all of the data the farms generate.

That may sound improbable, even dystopian, but It’s not a terribly far-fetched idea. John Deere and Monsanto penned a tentative deal for the tractor company to buy Precision Planting, an Illinois-based company that Monsanto had previously snatched up. But the U.S. Department of Justice objected to that proposal.

David King, a mergers and acquisitions expert at the Iowa State University College of Business, says there is precedent for regulators to be satisfied with as few as two powerhouse companies dominating a sector.

“The best example would be the aviation industry,” King says. “Airbus and Boeing are the two largest players and they supply to people everywhere in the world. So if there’s three large ag suppliers, they would be able to do a similar thing.”

King says in aviation, it’s a bit hollow for a customer to threaten to leave Airbus for Boeing or vice versa because relationships between supplier and client go very deep. Given that, he says, even three dominant players in ag would be a better, and viable, scenario.

“It’s better to have three because then it’s less of an act that ‘I will switch,’” King says “you have more choice.”

Still, for an industry that in its first 10,000 years or so relied upon farmers saving seeds from their best plants to sow the next year, and about a hundred years ago first exploded into a cacophony of competing seed companies, the ongoing diminishing of a competitive landscape in agriculture gives farmers and consumers plenty to chew on.