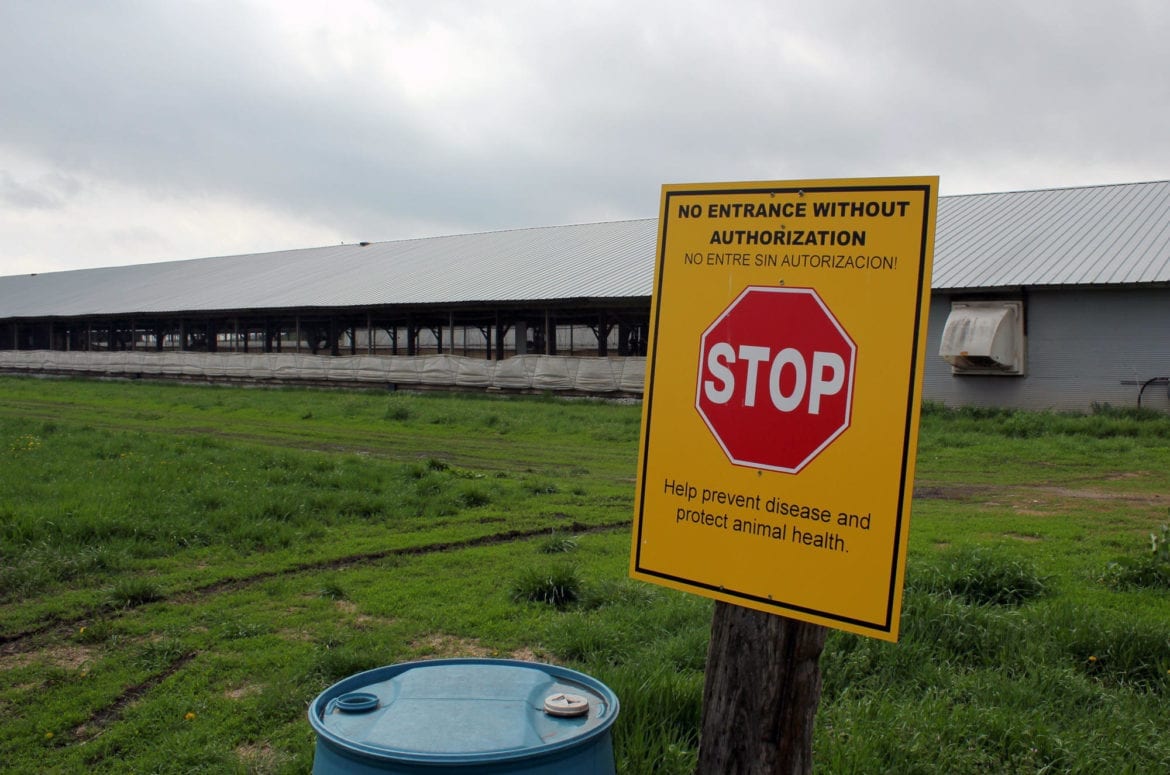 A stop sign at the edge of a Nebraska poultry farm serves as a biosecurity checkpoint. (Grant Gerlock | Harvest Public Media)
Share this story

Midwest farmers are warily watching as one strain of a highly contagious bird flu virus infects and kills humans in China and another less-worrying but still highly contagious strain infects a Tennessee poultry farm. Two years after a devastating bird flu outbreak in the Midwest, many farmers here say they now have a better idea of how to keep bird flu at bay.

Bill Bevans says each day on his farm near Waverly in eastern Nebraska started with a pit in his stomach.

“Kind of the feeling of living under a shadow of potential doom,” Bevans says, of watching the news during the 2015 outbreak. “Every time you open the door to your barn you take a sigh of relief when everybody’s still happy and healthy.” 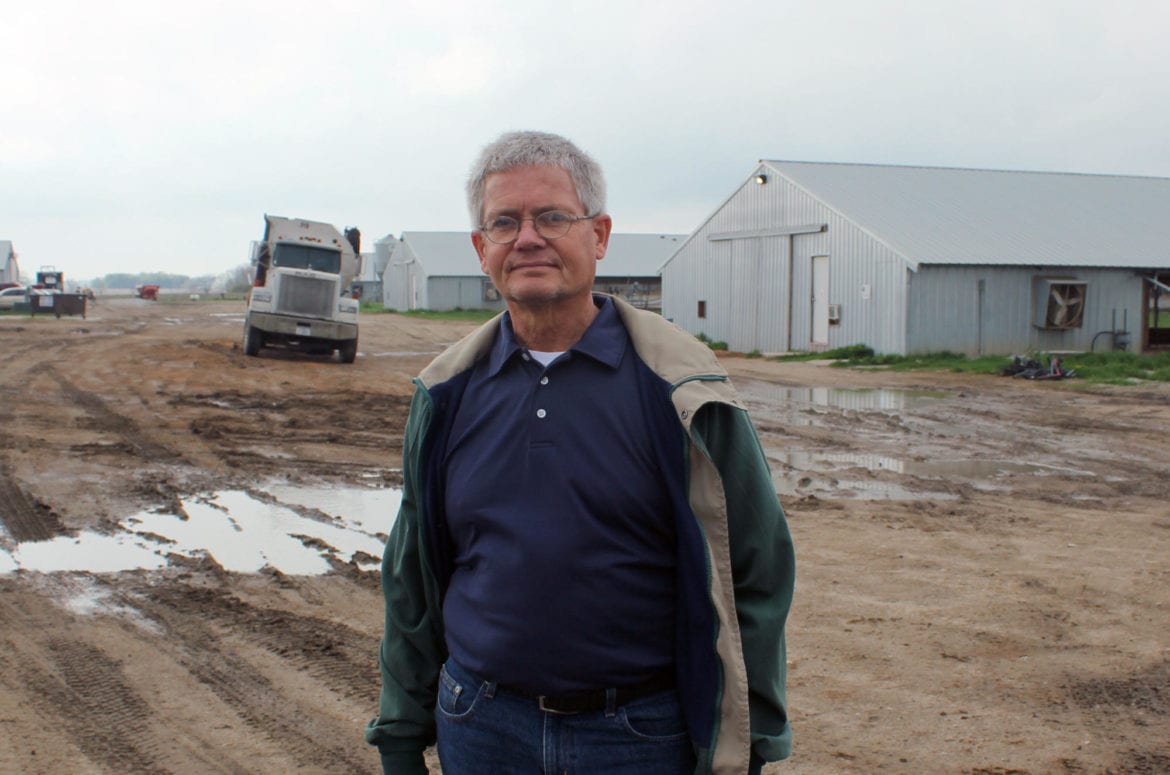 Bird flu never did bring doom to Bevans’ farm and this time he feels confident his flock of nearly a million chickens and turkeys each year is safe. On a gravel road outside a long, steel turkey barn, Bevans shows off new biosecurity measures, the rules meant to keep the birds healthy. The first layer of protection: keep uninvited visitors and uninvited germs off the farm.

“First thing you see is the stop sign,” Bevans says. “That just lets them know that we’d prefer if they stay back.”

Joan Schrader, Bevan’s sister and the farm veterinarian, says each barn has a second layer of protection: a bench and containers of chlorine powder blocking the entryway, reminding workers to stop, change their boots and disinfect them before they go in and before they go out.

“That way you create a little island of that house and that flock by doing the boot change and the disinfectant going in and out of the house,” Schrader says.

Those kinds of biosecurity measures are not necessarily new, but on poultry farms throughout the Midwest they have taken on new significance in the wake of the 2015 outbreak. Roger Dudley, who tracks livestock disease as the animal epidemiologist for the Nebraska Department of Agriculture, says biosecurity in 2015 was on many farms often overlooked and flawed.

Now, Dudley says, feed trucks are often sprayed down with disinfectant when they arrive at the farm, workers are forced to change boots and some have to shower and change clothes before they go in.

“Biosecurity has to be everybody,” Dudley says. “It’s the feed truck drivers, the rodent control guys that show up. Everybody has to be involved in biosecurity in order to make it work.

At the same time, state and federal scientists test birds to monitor for illness, both at slaughter and on the farm. If the results show highly pathogenic avian influenza, the response is immediate: both the sick and healthy birds on the farm are euthanized. During the outbreak in 2015, farmers complained about how long it took federal officials to give farmers approval to eliminate their flocks.

“One of the real lessons learned from 2014-2015 is the quicker you can put the birds down the less likely it is to spread,” Dudley says. 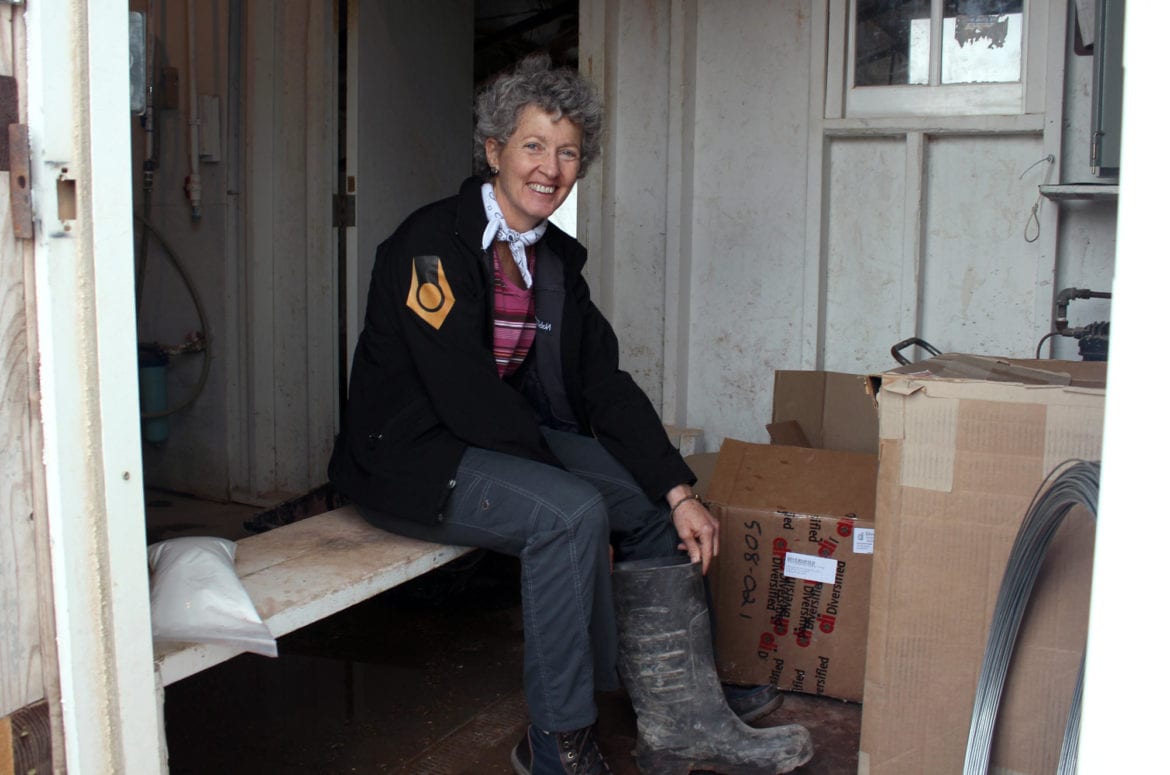 Joan Schrader, the veterinarian on the farm, sits on a bench that creates a staging area for workers to disinfect their boots. (Grant Gerlock | Harvest Public Media)

Joan Schrader, the veterinarian on the farm, sits on a bench that creates a staging area for workers to disinfect their boots. (Grant Gerlock | Harvest Public Media)

Joan Schrader, the veterinarian on the farm, sits on a bench that creates a staging area for workers to disinfect their boots. (Grant Gerlock | Harvest Public Media)
While drastic, Dudley and other state regulators say it is necessary to stop the disease from infecting more birds, and to preserve the safety of the human population. Recent outbreaks of avian influenza have not spread from birds to humans in the U.S. But in China, a strain of bird flu has reportedly killed at least 162 people since September.

Tom Safranek, state epidemiologist at the Nebraska Department of Health and Human Services, says animals are often sold alive in traditional markets in China, making people in those areas vulnerable. When livestock and people mix, so do viruses.

“It’s a perfect laboratory for co-mingling viruses and co-infection, be it a pig, a bird, or a human,” Safranek says.

The strains of bird flu found in the U.S. thus far in 2017 are a low risk to humans, but people can carry disease across the globe. Migrating birds leapfrogging the continents can also carry diseases. Precautions aimed at protecting chickens are aimed also at preserving public health.

Nebraska farmer Bill Bevans says he will keep his guard up in Nebraska, which means there is less traffic on his farm than there used to be.

“We used to meet salespeople, visitors,” Bevans says. “We’d walk them into the barn. We’d take pictures, you know. That just doesn’t even happen. No one even asks anymore.”

To Diversify The Landscape, Diversify Who Works It