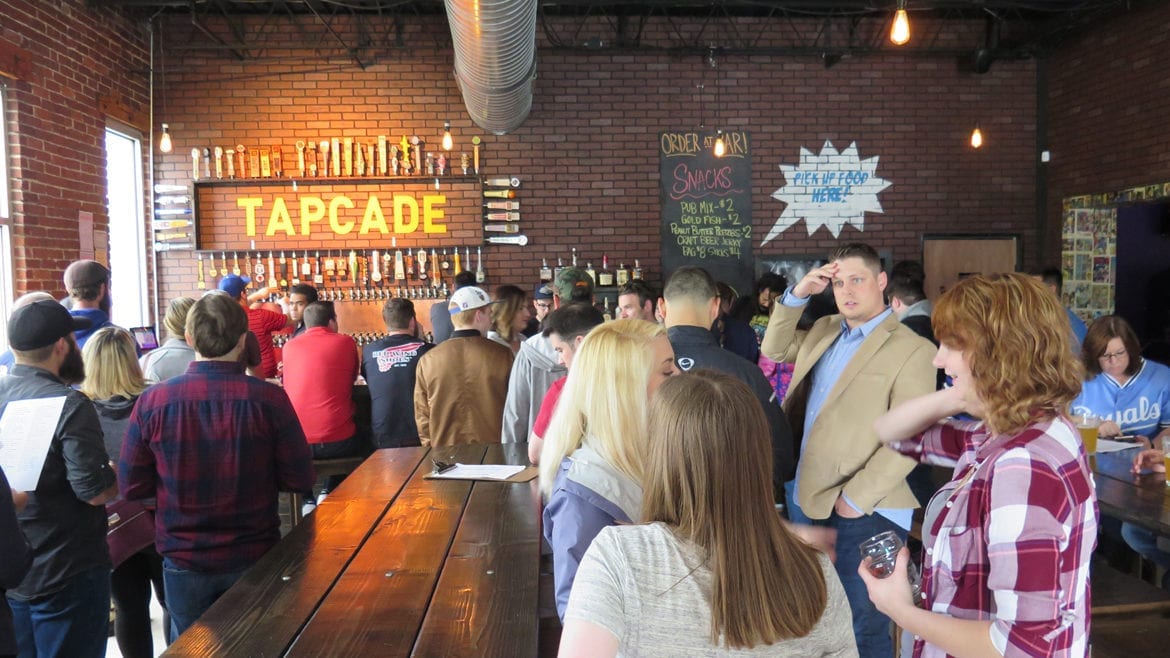 Tapcade NKC is bringing together donuts and coffee-infused brews in North Kansas City this weekend. (Pete Dulin I Flatland)
Share this story

It’s game on for Tapcade NKC (1735 Swift Ave., North Kansas City, Missouri). Aiming for a different audience than the family-friendly flagship location in the Crossroads, Tapcade NKC is a 21-plus arcade bar at all times.

Tapcade NKC is for those that love craft beer and gaming. It features more than 60 drafts, two Skee-Ball lanes, 10 pinballs, Pop-a-Shot, Dance Dance Revolution, and more than 25 arcade machines. It’s $5 for unlimited play or 50 cents a go for pinball, Skee-Ball and pinball.

Owners Adam Roberts and Brent Miller used brightly-colored Marvel, DC, and indie comics pages and covers as wallpaper to line columns, windows, and the bar countertop. Iron Man, The Joker, and the Hulk add energy and a playful feel to the arcade bar.

The kitchen will begin preparing and serving food in mid-May.

“Quadrophilia, our Belgian-style Quad (9.4-percent ABV), has been cold-conditioning for about 60 days,” Fetters said. “Sticke Alt (6.1-percent ABV) is a fresh malty German ale [like] a brown kölsch or an Oktoberfest fermented with kölsch yeast. Lots of malty Munich flavors, toasty and bready, with a spicy noble hop balance.”

Also, look for Lunch Pale Ale and Foxy Roxxy in the next few weeks.

“Lunch Pale Ale is our ‘session’ Pale. This batch did get a little wild at 4.9-percent ABV. It’s normally closer to 4 percent,” Fetters said. “[It has a] nice biscuity malt backbone with citrus notes in the flavor and aroma. [It was] dry-hopped with Citra and Cascade.”

“It drinks like an East Coast beer, nice and malt forward, and finishes with just a little hint of peppercorn spice,” said Fetters. “It’s usually a little under 5-percent ABV and will probably be on in a few weeks.”

Boulevard Brewing Company’s Saison Brett, a Smokestack Series limited release, returns to Greater Kansas City this week. Kegs were slated to be released yesterday with 75o-ml bottles on shelves today. Hibiscus Gose is on the same schedule with draft out yesterday and six-packs slated for today.

Behold the wonders of Dogfish Head Beer and doughnuts through samplings at Doughnut Lounge (4117 Pennsylvania Ave.).

May the Fourth be with you as Stout Madness storms the galaxy, or at least Harry’s Tavern (13657 Washington St.). Embrace “the Dark Side,” with Imperial stouts, including Founders KBS, Prairie Pe-Kan, Firestone Walker Parabola, Deschutes The Abyss (2016), Omnipollo Yellow Belly, Uinta Sea Legs and many other beers.

Grain to Glass (1611 Swift Ave., North Kansas City) takes part in the annual American Homebrewers Association (AHA) Big Brew Day celebrated nationwide. Six homebrewers brew in the parking lot from 9 a.m. to 4 p.m. Participate in a toast to homebrewing at noon along with homebrewers from across the U.S.

The first annual Fungi and Fermentation Festival debuts May 6 and 7 at Powell Gardens (1609 NW US Highway 50). Explore toadstools, mushrooms, live music, vendors, food and samples from local and regional brewers and meaderies.

Sunday is a fun day to join in Cheers for Charity at Kansas City Bier Company (310 W. 79th St.). Support BMA Foundation and Noah’s Bandage Project through purchases of Weizenbock. You can also buy a raffle ticket and indulge in a “Cake Walk” with treats from area bakeries and pastry shops.