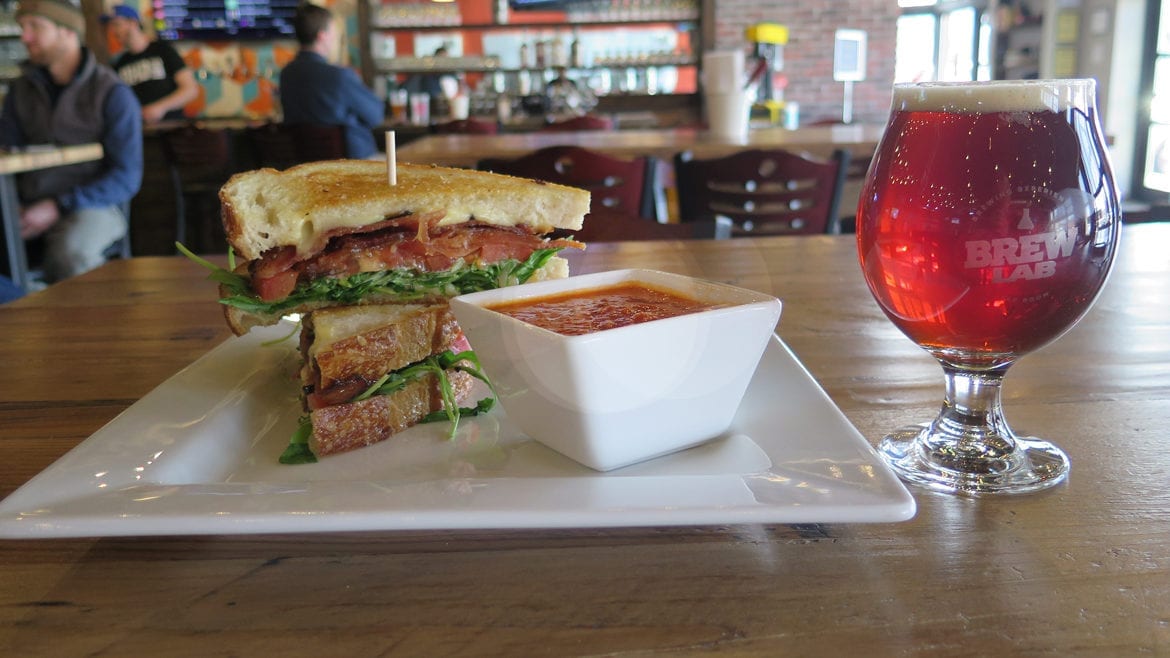 Brew Lab launched with the idea that you could experiment with small batches of beer. Now with its brewhouse up and running, you can take the same leap with its food and beer menu.

Last year, Brew Lab (7925 Marty St., Overland Park, Kansas) combined a brewery, homebrew supply shop, taproom and restaurant under one roof in its new home near the Overland Park Farmers’ Market. With the new year, Brew Lab has hit its stride with fresh beer and food available for customers.

In early January, head brewer Bart Campbell took over the reins in the brewhouse and slowly introduced a wider variety of beers to the mix on tap. The taps have recently featured a black saison, American stout, Belgian pale ale, American IPA, Norwegian ale and Belgian tripel. Campbell plans to add more “juicy, hazy” IPAs and an American blonde among other styles.

Whether popping in for lunch, dinner or a session of suds, Brew Lab’s menu is well-suited to pair with beer. The BLT, made with candied bacon, peppery arugula, tomato, gouda and Emmental cheese, and a green chili Dijon aioli on sourdough, is a slightly fancier nod to the BLT found at The Peanut. Brew Lab’s version is every bit as satisfying. Try pairing the sandwich with an ale or mildly hoppy IPA.

The grilled cheese, a gooey blend of gouda and Emmental cheese on sourdough, is served with rosemary and rye saison tomato soup. Perfect for a cold winter day, the soup and sandwich combination works well with a saison or farmhouse ale.

For a hefty meal like the eight-ounce DTOP Angus burger, consider an ale, crisp IPA or even a stout. If available on tap, beers with a sour profile, such as a gose or Berliner Weiss, provide a tart, acidic counterbalance to the rich flavors found on the charcuterie plate. Classic fried food, such as truffle fries, benefit from the crisp, malty notes of an ale to cleanse the palate.

Since Brew Lab’s beer selection varies with availability and the season, ask the server for suggestions on preferred pairings, or try your own beer and food experiment in the Lab.

Kaw Point Meadery has a host of meads in development. (Pete Dulin | Flatland)

Kaw Point Meadery has a picked a place to call home. The meadery signed a lease to be at 613 N. Sixth St. in Kansas City, Kansas, right in the heart of Strawberry Hill.

Kaw Point Meadery Sweetens Prospects for Hometown MeadIn the cool basement of a Kansas City, Kansas, home, Daniel Bauer, John Zumalt, Jr., and Sam Suddarth, are working to perfect a series of mead recipes. This is where Kaw Point Meadery starts and it's a long journey. Kansas…

Wakarusa Brewery (710 Main St., Eudora, Kansas) added Sunday hours. The Kansas brewery is now open from 1 to 9 p.m. and has a blackberry mead and new IPA in the works.

Rock & Run Brewery (110 E. Kansas St., Liberty, Missouri) has a Chocolate-Raspberry Stout (with raspberries and cocoa nibs) and Black Current Gose (made with black currants and darker roasted wheat malt) on tap. Shamrock Red, an Irish Ale, and My Other Brother Darryl, a New England-style IPA, are slated to be released in the next week. Rock & Run is also throwing a Valentine’s Beer Dinner on Feb. 13.

Boulevard’s Jam Band is out next week. (Courtesy of Boulevard)

Tapcade (1701 McGee St., Suite 201) and KCUR are hosting a State of the Union Watch Party. Immediately after the State of the Union, which is scheduled to begin at 8 p.m., KCUR’s Steve Kraske hosts a panel discussion.

Starting at 6 p.m., the taproom at Fringe Beerworks (224 SE Douglas St., Lee’s Summit, Missouri) will have all of 2017 Founders barrel-aged beers available, including CBS. A limited Founders Brewers Series beer will also be tapped.

Lean in to the Kansas-Kansas State rivalry. International Tap House Crossroads (403 E. 18th St.) is hosting trivia and offering discounts on Free State and Tallgrass brews, which are headquartered in Lawrence and Manhattan respectively. Expect the rivalry at an all-time high after Monday’s basketball game.

Green Room Burgers & Beer (4010 Pennsylvania Ave., Suite D) celebrates its sixth anniversary today. The Tap List is Uber-worthy. It’s a barrel-aged rye strong ale, a pale ale with citrus fruit, a dry-hopped English bitter all on cask, as well as a dark lager, IPA with Cashmere hops and a Belgian-style single on draft. Green Room will also be tapping a keg of Perennial Abraxas.

Foundgrog Day is the new February holiday you never knew you needed. Join Matt Moore, co-founder of Martin City Brewing Company (500 E. 135th St.), for a Groundhog Day party that includes a bike ride, beer, and some shadow searching that starts at 11 a.m.

Fringe Beerworks (224 SE Douglas St., Lee’s Summit, Missouri) is participating in the Chocolate Crawl for a Cause, which benefits Lee’s Summit Social Services. They will have eight different chocolate beers on tap. Each four-ounce pour is $2.

Forget the Super Bowl. Go get that super bowl…of chili. The Flying Saucer Draught Emporium offers all-you-can-eat chili ($10) or you can snag a flight of three different kinds of chili paired with three beers.

Boulevard Brewing Company’s Jam Band arrives today on draft and in six-packs tomorrow. Jam Band had been a tap room test beer that became a Smokestack series release. In 2018, it graduates into the year-round lineup. With lots of fruit in the nose — the beer is made with raspberries, blueberries and cherries — and a deep red pour, this brew will get your attention.