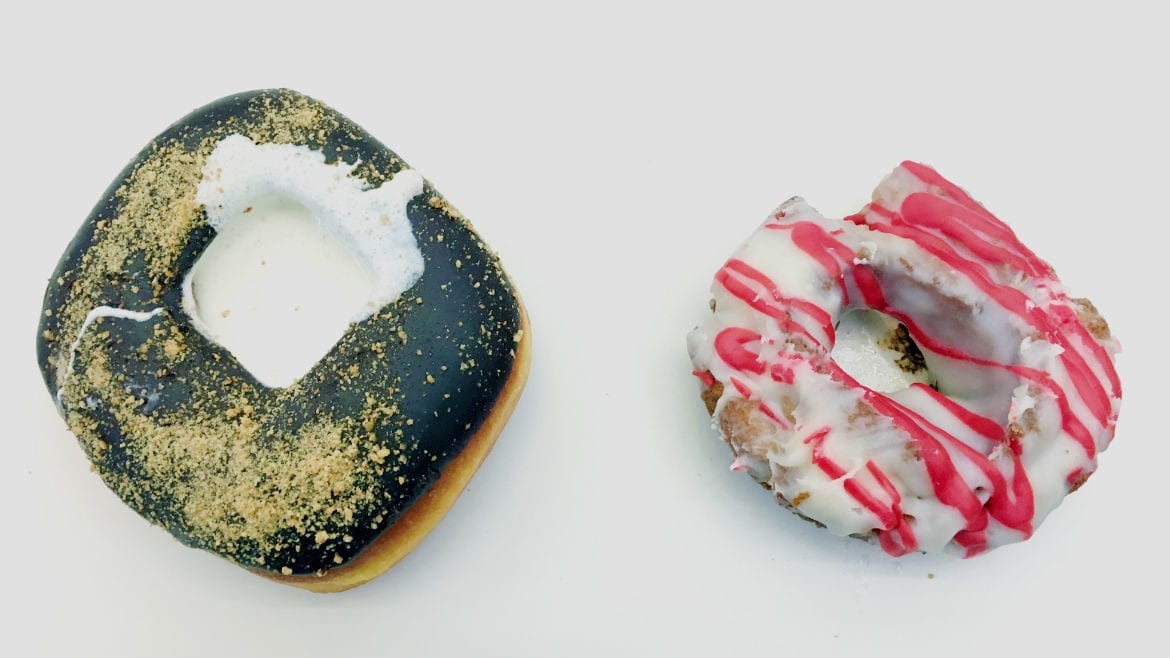 As January draws to a close, it’s time to officially abandon your New Year’s resolutions. Dive headfirst, or roll, into February with the new outpost for Doughnut Lounge (7926 Santa Fe Drive, Overland Park, Kansas). The doughnut bar’s second location opened earlier this week in downtown Overland Park in the former El Salvadoreno space. The new spot is open from 7 a.m. to 8 p.m. Tuesday through Sunday. The kitchen is open from 8 a.m. to 2 p.m.

Doughnut Lounge has a host of sweet creations, but they also find ways to work doughnuts into macaroni and cheese and pizza, or top a savory doughnut with biscuits and gravy. On the Missouri side, the original is at 4117 Pennsylvania Ave. and a third location is in the works in North Kansas City.

Time to Make the DoughnutsDoughnuts are no longer just a morning food. Doughnut Lounge – a new doughnut shop with a cocktail and espresso bar – opened Thursday in Westport. Beyond offering doughnuts late into the night, the lounge has a unique take on the…

The chickens have come home to roost, East Brookside. Brookside Poultry (408 E. 63rd St.) opened on Tuesday in the former Oak 63 space. Spit-roasted chicken is at the heart, literally, of the restaurant run and owned by chef Charles d’Ablaing, formerly of Chaz on the Plaza. Brookside Poultry has a small dining room with an open kitchen, where whole ducks and chicken turn on a spit. Fried chicken is available in wing form, as chicken salad or by the piece. Things also get a little southern with black-eyed peas, shrimp and grits, cheddar biscuits and country ham.

Oak can mean a lot to wine. Find out what oak means to you at Jowler Creek Winery’s ninth annual Comparative Oak Tasting from 11 a.m. to 5 p.m. Saturday. At the tasting ($12), you get to try Norton and Chambourcin that has been aged on different types of oak, along with three of Jowler Creek’s wines.

Ahead of the real Olympics, you can take part in your very own beer Olympics. The Flying Saucer Draught Emporium’s (101 E. 13th St.) Saucer Beer Olympics is from 2 to 5 p.m. Saturday. The beer spot will organize random teams of three to four to challenge each other in foosball, darts, air hockey, and golf. No medal stand, but there is a trophy.

Chefs don’t get to take sabbaticals, but chef Jonathan Justus is trying out a version of one in Kansas City. He’s placed the Justus Drugstore on hiatus in Smithville, Missouri, while opening Black Dirt (5070 Main St.) in KC. The newly-opened bistro is serving duck confit fritters, a chicken gizzard salad, and a chopped kale salad. Think of Black Dirt as the more casual, but still locally-focused, cousin of the Justus Drugstore. Black Dirt is open from 4 to 10 p.m. daily.

Ever wanted to learn how to make your own cheese? You can at Bacchus and Barleycorn (6633 Nieman Road, Shawnee, Kansas) from 1 to 4 p.m. Saturday. The Making Quick Cheese class ($20) will focus on mozzarella, but also touch on soft cheese and crème fraiche.

The Crown Center Ice Terrace is open on the weekends (and open for the season through March 11). After skating, head across the street and warm up with a hot cup of tea and a bite or two at 1+1 Dim Sum Tea House. The dim sum menu is served Monday through Saturday (keep an eye out for the Chinese pastry filled with red bean paste), while it’s just tea service on Sunday.

Shang Tea Transforms Into 1+1 Dim Sum Tea HouseShang Tea has turned over a new leaf. The tea house and retail shop has sold and served fine loose-leaf tea from its serene first-floor shop in Crown Center (2450 Grand Boulevard) for nine years. Now known under its new…

Get out on the road and dine in another town. Downtown Lawrence Restaurant Week continues through this Saturday. Culinaria (512 E. Ninth St.) has crispy smashed potatoes and a house kale salad with Fresno chiles, and Limestone (814 Massachusetts St.) is taking you back to the classics with steak au poivre and banana cream pie with house made “Nilla,” wafers.