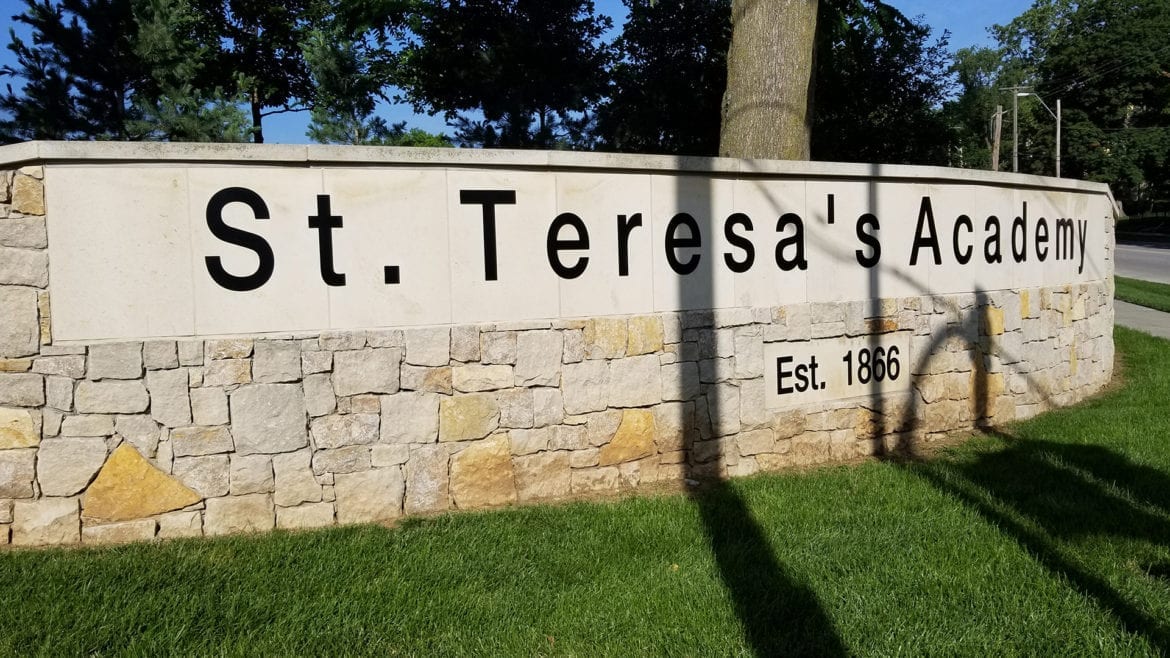 In September 2017, a photo posted on Snapchat showed a group of St. Teresa’s Academy students posing in front of a table with beer pong cups arranged in the shape of a left-facing swastika. Social media exploded.

That incident at a private home  “really brought us to our knees,” says Nan Bone, who is just retiring as the president of the Catholic girls school, located at 5600 Main St., in Kansas City, Missouri. “We couldn’t get ahead of it. It happened on a weekend and quickly it was everywhere.”

Andrea Arrendondo, St. Teresa’s  director of campus ministry, puts it this way: “It felt like we were under attack as an institution.”

Since then, a lot has happened at the 600-student school, including: expressions of righteous anger from students appalled by their classmates’ vile action; work by the faculty, administration and board to manage the crisis and right the ship; apologies; forgiveness; a mandatory retreat with the class of which the offending students were a part; diversity training with an emphasis on interfaith understanding; outside speakers; outside consultants, and more.

No one connected with the school today claims something similar couldn’t happen again. As Marion Pierson, a St. Teresa’s board member, says, “This is work that will constantly be in process. We can’t ever say we’ve fixed that, we’re done with that.”

But as Bone turns over leadership of the school to Siabhan May-Washington, an administrator at Pembroke Hill Upper School, she tells me this: “I feel that we’re in a really good place. And I think the board agrees.”

As just-graduated senior Julia Kerrigan says, “When I think back on that fall, there’s still a lingering wish that it’s something we didn’t have to go through. Even though growth did come from it, it was a really bitter and not a fun time. But I think there’s been so much growth.”

One of the opportunities for growth came from asking representatives of the Kansas City Interfaith Youth Alliance (KCIYA) and the Faith Always Wins Foundation to come to campus to help, working especially with Arrendondo. Jon Willis, KCIYA president and founder, had a daughter attending St. Teresa’s at the time of the incident and quickly contacted Bone to offer assistance. (Disclosure: I serve on the KCIYA board.)

Kerrigan, who became a youth alliance member in reaction to the swastika incident, says this: “We’ve really come far, and having KCIYA on campus has really helped. We’ve learned to have a lot of grown-up conversations. I know there was a lot of commentary from the outside (when the incident happened), but I really feel it was something that we were handling in a really mature way.”

Clare Stern, executive director of interfaith programs for KCIYA, has spent lots of time on campus in the last year-plus leading retreats, talking with students, helping with ecumenical events. She says that “one of the most useful things that came out of this experience was that we have now created such a relationship with St. Teresa’s — both at the student level and the administrative level — that it feels like they are us and we are them.”

The inexcusable behavior of the students at the swastika party was shocking to much of the school because St. Teresa’s had done lots of work over the years to teach students the value of diversity, racial and otherwise. That didn’t always mean there were no problems. In fact, after the swastika party made unwanted news, there was additional publicity about frustrating racial experiences of some St. Teresa’s African-American students.

But even an outside consultant, called in to review how the school was handling diversity issues, praised St. Teresa’s in its final report: “Saint Teresa’s has developed and conducted an impressive amount of high quality, rich and advanced programming around diversity and inclusion. . .”

Board member Marion Pierson agrees that St. Teresa’s has tried hard in this area but says more is needed.

Things at St. Teresa’s now are going in the right direction, she says, but the school needs to recruit more minority faculty members and administrators: “We need the diversity and the richness that will make our girls as a whole — all 600 of them — better women, better girls. They can’t learn about it in a book. They can’t do it part time. And we know this is not easy work, and it’s not work that we’ve always done.”

Bone and others at St. Teresa’s have been second-guessed for how they handled this mess.

“One of the things I was criticized most for,” Bone told me, “was not kicking out the girls. In my heart of hearts, I felt like if I was going to turn this around, it needed to come from their classmates, their teachers. If I just expelled them, they’d have gone to Shawnee Mission East or somewhere — and not learned anything from this experience.”

Her wise choice prevented that. And in the process helped some students gain an appreciation for religious traditions beyond their own. In a religiously pluralistic nation, that’s now crucial.