'Religion on the Line' Enters 25th Year on KCMO radio 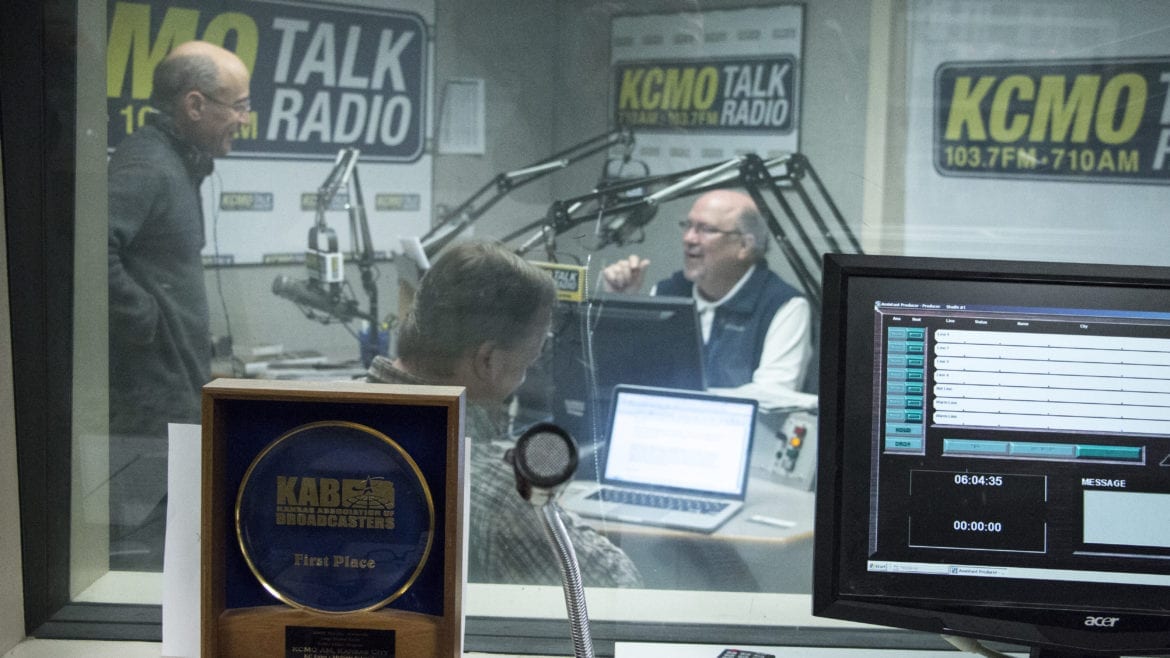 Rabbi Michael Zedek (standing) typically co-hosts the show from his home city of Chicago, but he was in the studio this spring during a visit to town. The other co-hosts are the Rev. Robert Lee Hill and Bill Scholl (foreground). (Mike Sherry | Flatland)
Share this story

Virtually every Sunday morning for more than two decades, the Rev. Robert Lee Hill has left his Brookside home before sunrise to make his way to the studios of KCMO radio.

The live talk show he co-hosts with Rabbi Michael Zedek and Bill Scholl of the Archdiocese of Kansas City in Kansas has also become a weekly ritual for a dedicated audience that regularly tunes in to the 6 a.m. program.

“Religion on the Line,” as the tag line says, is “two hours of exploration into the world of spirituality, faith, hope, love or the hot buttons of today.”

Spurred on by a band of loyal listeners, and sustained by committed co-hosts, the show has become an institution that in May launched its 25th year on the air.

Hill said the reason behind the show — providing a forum for a conversation among people with vastly different views — is more compelling than ever.

The co-hosts want to be “arbiters of a communal civil discussion,” Hill said. “Is there a way we can talk?”

“We don’t have to see eye to eye to walk shoulder to shoulder.” — Rabbi Michael Zedek

“Religion on the Line” began after popular radio talk show psychologist Marshall Saper took his own life in November 1991.

Zedek, then rabbi of The Temple, Congregation B’nai Jehudah, came on to console Saper’s listeners, who had relied on Saper to deal with their emotional struggles.

“Radio, because it is voice only, creates an extreme intimacy that is surprising in some ways,” Zedek said. He remains B’nai Jehuda’s rabbi emeritus and has continued to co-host the show remotely even though his career took him out of town long ago.

Zedek remembers one Friday when a caller said she was angry at Saper for killing himself.

“One of my associates at the time, a nationally known psychologist, suggested that we should not be angry,” Zedek said. “We needed to understand.”

But Zedek told the caller that feelings can’t be wrong because they aren’t in our control.

The message resonated with many grieving listeners. Zedek continued to fill in, and eventually he was asked to start his own show.

“I thought, ‘What about a show where a rabbi, a priest and a minister can disagree without being disagreeable?’”

Zedek called on Hill and the Rev. Tom Savage, then president of Rockhurst College, to join him. That was the start of  “Religion on the Line.”

“G-o-ooo-d Morning! You’ve got ‘Religion on the Line’ here at KCMO talk radio,” Hill exclaims at the start of each show. “Thank you for allowing us to be part of your Sunday morning.”

The ensuing discussion meanders from topic to topic like a family dinner conversation. Bible verses wind to politics, which lead back to God.

On a recent Sunday, a caller named Mike wanted to talk about forgiveness. The caller fumbled through a story about a dog he’d swatted with a broom when he was a child some 50 years earlier. He never saw the dog alive again. It ran away and was found dead.

“That haunts me today,” he told the co-hosts.

But Zedek told him that God will forgive him.

“We’re all haunted, Mike,” Zedek said. “The question isn’t to be haunted. The question is what you’re going to do about it. It’s not to get rid of it, it’s to act forward.”

Hill told him to make a contribution to Wayside Waifs and look at that as penitence for what he did all those years before. When the caller said he just wished he could know that God had forgiven him, Hill made a final gesture before moving to the next caller.

On another broadcast, a caller wanted to argue about the scriptural meaning of “sanctuary.” Another dismissed the clergy hosts’ claim that President Trump had called the news media “enemies of the people.” (Hill, who controls the board most of the time, told him he was utterly wrong and quickly disconnected the call.)

Annette wanted to talk about Mardi Gras but quickly digressed to wondering how automation is going to affect people, and then onto who the big winners would be at the Oscars later that evening. The hosts were all too happy to share their thoughts on the final topic.

“Religion on the Line” broadcasts on KCMO radio in Kansas City and recently added KMAJ-AM 1440 in Topeka. The broadcast is also streamed online, so callers from all over the world can hear it.

Zedek’s goal at the outset was to create a space where people of different faith traditions could find common ground and articulate ways they didn’t have the same convictions.

“I still think, in fact, all the more so in our current political climate, that it is vital for people to recognize how they can have conversation across differences,” Zedek said. “We don’t have to see eye to eye to walk shoulder to shoulder.”

While the radio talk frequently strays from religion to politics, the grounding of the show is clearly religion. When one of the regular hosts is unavailable, clergy from other faith traditions, including Islam, are invited to take part.

Each week the show ends with a united chorus.