Forgive the Rev. Adam Hamilton, founding pastor of the 20,000-member United Methodist Church of the Resurrection, if his attention seems divided these days.

One minute, he’s celebrating the opening of a new $81-million sanctuary — complete with a breathtakingly large stained glass window — at its main campus in Leawood.

The next, he’s worrying that his entire denomination, the 12-million-member United Methodist Church, may fracture in a caustic fight seemingly over homosexuality though, in fact, the battle is more about how to read and interpret the Bible.

Hamilton understands that he’s a hugely influential voice in the UMC, and he favors a change in church policy that would be more affirming and inclusive of LGBTQ people. But he also knows that members of his local congregation simply want to get on with doing compassionate ministry and not get bogged down in a denominational war.

Last year, the governing body of this international Protestant denomination almost split over whether the church would change policy to allow ordination of gays and lesbians or permit clergy to perform same-sex marriage. 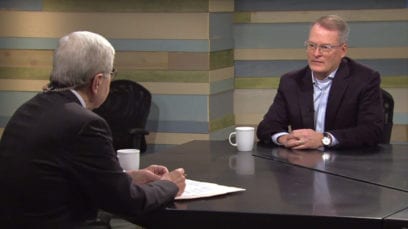 Mike Shanin interviews United Methodist Church of the Resurrection’s Adam Hamilton about being named Johnson Countian of the Year. The interview appeared on KCPT’s “Ruckus” in December 2016.

Hamilton was among a handful of leaders who offered a compromise that created the  “Commission on a Way Forward” to rethink the whole matter, though even scholars at Methodist institutions are skeptical a schism can be avoided. Hamilton is not a member of the commission.

“I do think there will be a division that will happen,” Hamilton told me recently in an extended interview. “It’s untenable for us to continue along the (current) path.”

There is some willingness to compromise among Methodists in the broad middle, but not, he said, among far-left liberals and far-right conservatives (those terms describe theology, not politics).

The ultra-conservatives have created the Wesleyan Covenant Association, which has this among its core beliefs: “In keeping with Christian teaching through the ages and throughout the Church universal, we believe that marriage is the uniting of one man and one woman in a single, exclusive union. We believe that God intends faithfulness in marriage and celibacy in singleness.”

Hamilton and many others argue that such beliefs reflect an unnecessarily rigid reading of scripture. In fact, in my Presbyterian circles, I’ve made that argument for decades, including in this essay on my “Faith Matters” blog. These arguments have earned brickbats for Hamilton, including his once being compared to Hitler. And, of course, I’ve been told numerous times that I’ll spend eternity in hell.

One reason the United Methodist Church has been slow to follow the path of the United Church of Christ, the Evangelical Lutheran Church in America, the Presbyterian Church (USA), and others, is that more than 40 percent of the world’s United Methodists live outside the U.S., many of them in Africa — where the path toward LGBTQ liberation is decades behind the U.S.

But Hamilton told me that, even if the issue were confined just to congregations in the U.S., there probably still would be a schism, with most of the opposition to LGBTQ acceptance coming from churches in the South.

“We have to acknowledge what we’re debating about,” he said. “Ultimately the issue is. . . how we look at the Bible. We’re really debating not same-gender relationships primarily.”

One reason Hamilton says that is because earlier in his ministry he, too, thought the Bible condemned homosexuality and thus, of course, he believed it would not countenance the existence of long-term, committed homosexual relationships. But after much study Hamilton changed his mind — and has written about that change in books, on his blog, and in other venues.

Hamilton thinks the Way Forward Commission will “come back with some recommendations that no one will love completely” but that may help a bit temporarily.

Still, the time, resources and energy religious bodies, including Methodists, have put into questions about human sexuality are simply stunning.

“I long for the day,” Hamilton told me, “when this is not what we fight about all the time. It wears me out, and I’ve got too much going on here at Resurrection.”

In recent years, Hamilton has devoted hundreds of hours to various denominational matters he considers important. But he finds it frustrating that those hours pull him away from devoting time to making COR a vibrant place that transforms lives.

“I don’t think I’m God’s gift to the Methodist Church,” he said. At the same time, he knows he has responsibilities well beyond COR.

Indeed, Hamilton’s work beyond COR may help decide the future of an entire denomination.