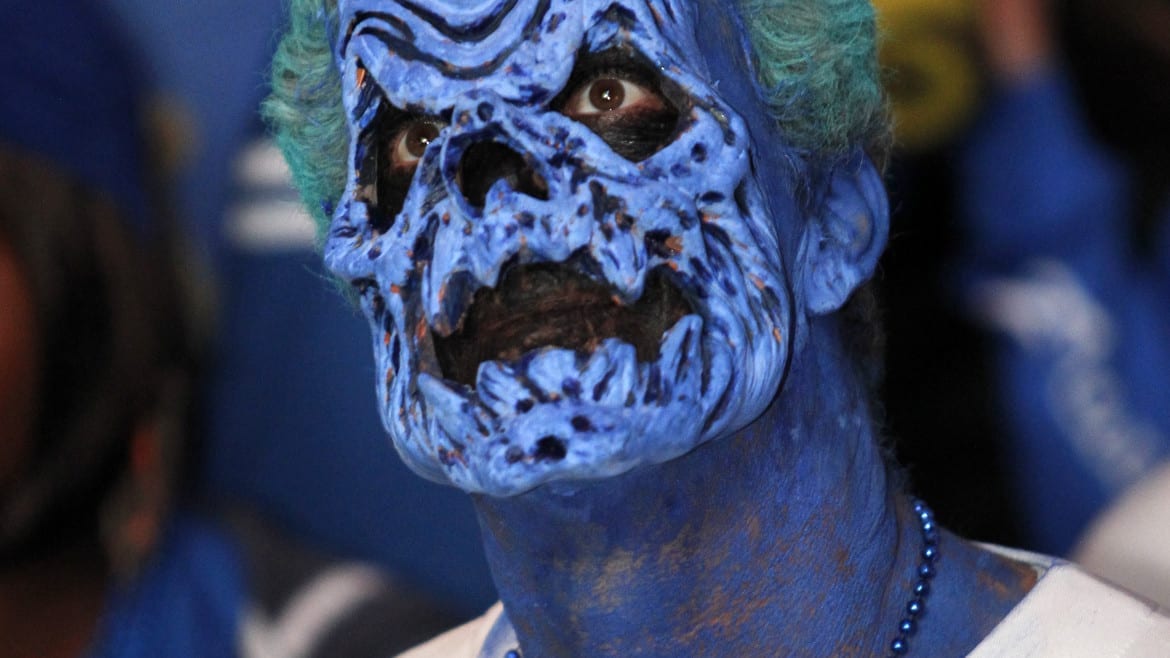 If you hate fun, this will be a terrible weekend. Kansas City is in rare form right now. The weather is crisp. The leaves are changing. And – oh, yeah – our favorite local baseball team is playing in some kind of postseason contest. World Series games 3, 4 and 5 (if necessary) are Friday, Saturday and Sunday night, respectively. Oh, and that Saturday night? It’s Halloween. Yowza.

Personally, baseball is enough for me. I’ll be leaving the costumed revelry for others. Find me glued to the screen all weekend; radio in one hand, smartphone with Twitter and Facebook feeds in the other, high-fiving fellow fans until my hands are sore. If you, however, want to get Halloween-y, there’s a plethora of places to get your scary on.

The city’s wildest, sloppiest, craziest party will probably be at Power & Light. They’re calling it Carnival of Chaos, and the name will prove prophetic. The free event features DJ Mike Scott, tons of decorations, and a costume contest with $15,000 worth of prizes. The annual Bacchus Bash at Union Station will be another wild one. Tickets, which start at $55, grant five hours of access to ten open bars. That debauchery is for a cause, benefiting the Love Fund for Children.

The local radio stations are getting in on the frightful festivities. Friday night at the appropriately named VooDoo Lounge, 105.1 Jack is throwing its Retro Halloween Bash starring The Stolen Winnebagos. Also on Friday, 96.5 The Buzz has its annual Halloweenie Roast, featuring Andrew McMahon in the Wilderness, New Politics, and The Griswolds. The next night, also at The Midland, 98.9 presents Freakers Ball 2015; a harder-edged bill with Pop Evil, All That Remains, and Red Sun Rising. For something a little tamer, try The Dinner Detective Interactive Murder Mystery, a nationally touring show that stops this weekend at Hotel Phillips.

We sometimes forget that Halloween is a kids holiday. If you aren’t into the whole “dress as a sexy whatever and drink” thing, Boo at the Zoo is good for the kiddos. Halloween Haunt at Worlds of Fun is annual tradition for a lot of KC families. The Liberty Corn Maze is wholesome fun, and so are the Pumpkin Hollow festivities at Deanna Rose. Crown Center will have safe trick or treating fun. That includes Brick or Treat at the Lego Discovery Center. Plus Sea Life, right next door, will offer an exhibition of underwater pumpkin carving. Which is apparently a thing.

There are, by the way, completely non-Halloween related things to do around town. The KC Rep is currently staging another typically brilliant show, a civil rights drama called Blueprints to Freedom. The Bach Collegium Japan performs at Yardley Hall on the JCCC campus. The Kansas City Symphony is kicking off their annual pops series at the Kauffman Center with Classical Mystery Tour; a tribute to the Beatles.

Oh, and there are even sports besides the Royals. Sporting KC has a one-game playoff Thursday night in Portland. Plus, as long as you don’t mind getting up really, really early, there’s football. Set the alarm for Sunday morning, and grab some tea and crumpets because the Chiefs are playing the Lions in London. It’s all part of the NFL’s decades-long, halting, and completely baffling attempt to break into the European market. Kickoff, believe it or not, is at 8:30am.

Then again, you may want to sleep in. If the Royals are lucky enough to finish off the Mets and win the World Series, you’re going to need all that energy for the parade.

Inside KC’s Creepiest Haunts: The Other Side of the Scare

Enter if You Dare

Great Pumpkins Keep Family Traditions Alive, Even Through A Pandemic