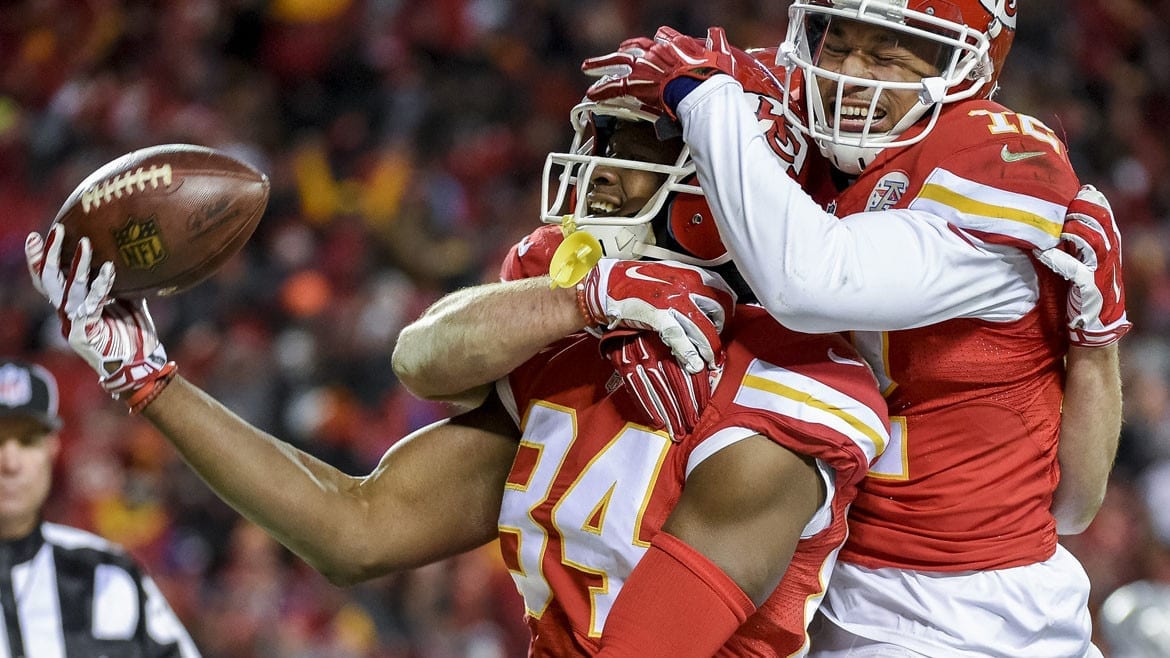 The Kansas City Chiefs had much to celebrate during last weekend's win over the Oakland Raiders. The victory takes us to this weekend's playoff game in Texas. (Photo: Reed Hoffmann | AP)
Share this story

EDITOR’S NOTE: This is the Weekender’s last hurrah on Thursday. Starting next week, we’ll be appearing on Wednesday afternoon — just to give you a little extra head start on making plans. You’re welcome.

This weekend is all about football. The red hot Chiefs are going for their first playoff win since the Clinton administration began, and the city is giddy with anticipation. The Chiefs and Texans play on Saturday afternoon, at 3:35 pm on ESPN and ABC in an AFC wild-card game. (Wear red.) After that, the Steelers play the Bengals. Or, if you are into a different kind of ball, watch the No. 1 KU Jayhawks play Texas Tech.

If you want to watch football with a few of your fellow fans, just hit up pretty much any bar in the greater metroplex. If you want to watch along with a huge, cheering throng, go to the Power and Light district. The Chiefs are hosting an official watch party at KC Live! The free event will kick off at 2:30 pm, and includes appearances by KC Wolf, the Chiefs cheerleaders, and the team band. The first 5,000 fans through the gates will get a free little flag to wave. That sea of red will make for pretty pictures on TV – just in case you want to stay home, warm and dry.

After the Chiefs (we hope) win, you’ll probably feel like dancing. You can do that Saturday night at Prohibition Hall. The lineup is a virtual who’s who of KC DJs, with Paul DeMatteo, Bill Pile, and Jeffrey Bass. But there’s plenty of music played by actual musicians as well. Like Kississippi. Paper magazine pegged them as a breakout band for 2016. Stereogum called them a “Band To Watch.” You can watch – and listen – on Friday night when Kississippi brings their dreamy, minimalist pop to The Tank Room. KC’s arena-ready power pop, Yes, You Are will open the show.

To get even crazier, head up to Lawrence. Rising hip-hop star Waka Flocka Flame plays the Granada. The show, which also includes Staxx, DJ A1, and Jooby Truth, is called #RAGEFEST, but you’re still allowed to smile and have fun. There’s a tight EDM show the next night at the Granada, too. BUMPARUSA 5 features G. Jones from Santa Cruz and and LUMBERJVCK from LA.

You know what’s awesome? Monster trucks. Sure, there’s no intellectual content. Yes, they glorify fossil fuels and and revel in mindless spectacle. So? Kids love ’em and so will anyone who digs kitsch and hilarious people watching. This weekend you can see OUTLAW, TAILGATOR, THUNDER CHICKEN, BIG CHIEF, MONSTER PATROL and TUFF-E-NUFF at the Expocenter in (where else?) Topeka. Next month at Monster Jam at Sprint Center, you can see GRAVE DIGGER, ZOMBIE, EL DIABLO and many, many more. No, I’m not sure what any of those vehicles look like. Yes, I am sure they will all be big, loud, brightly-colored fun.

After all the noise and fumes in Topeka, you might be in the mood for something a bit more high-minded. Do a total turnaround with Brilliant Brits January 8-10 at Kauffman Center. The Kansas City Symphony, led by guest conductor Robert Spano and featuring cellist Timotheos Petrin, will perform a program chock full of British composers. That includes an excerpt from Oliver Knussen’s opera, “Pigglety Pop!” and Vaughan Williams’ symphony “London.” Just be sure to shower off the stink of exhaust fumes before you head to Helzberg Hall.

Don’t forget to laugh this weekend. You might know comic Josh Wolf from “Chelsea Lately.” And you might know John Henton from “Living Single,” and “The Hughleys. You can see both comics this weekend in KC. John’s show is tonight at the Improv. Josh is at Standford’s all weekend.

Sunday it’s supposed to be in the 20s. You might be best off staying in and watching the NFC wild-card games. The Seahawks play the Vikings and Green Bay plays the Redskins. The Chiefs just might see one of them – we can dream can’t we – a few weeks from now in the Super Bowl.