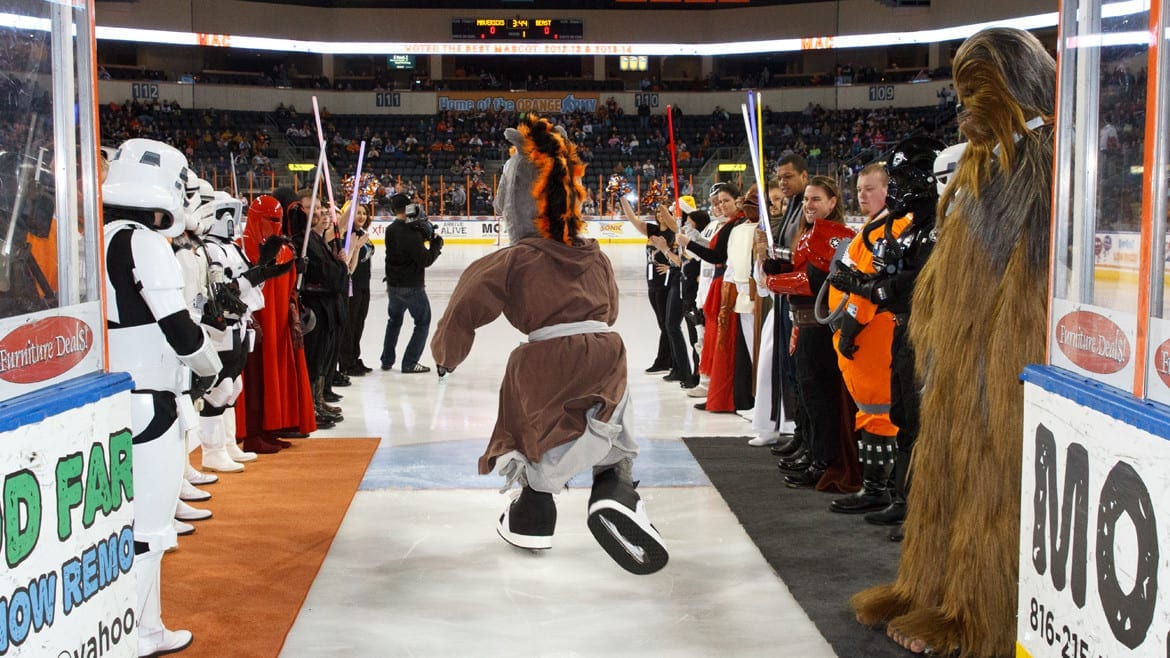 It’s the last weekend before Christmas. That means you’ll probably spend most of your weekend shopping or at holiday parties. This is also the week (in case you hadn’t heard) that the new Star Wars movie premiers, meaning that pretty much everyone in North America is going to spend at least some precious weekend time rooting for the Rebel Alliance. It’s enough to make you want to stay home and watch TV. Like, for instance, “Saturday Night Live”. Tina Fey and Amy Poehler are hosting, and Bruce Springsteen is the musical guest.

If you do want to get out, however, there’s no shortage of stuff to do.

In past columns, we’ve discussed some of the more traditional Christmas-themed entertainment around town. Like The Best Christmas Pageant Ever from The Theatre for Young America or Christmas in Song at Quality Hill Playhouse. But there’s plenty of Yuletide fun with a decidedly alternative twist. For something different (and definitely not for kids), try Christmas Ain’t A Drag at the Madrid Theater or “Betty White Christmas” at Missy B’s. Don’t being the kids. Do bring your I.D..

If you care a lot about “Peanuts”, this is the weekend for you. We have two, count ’em two, shows paying tribute to Charles Schultz’s famous creations. The Coterie Theatre’s live version of “A Charlie Brown Christmas” runs though January 3, and Friday night at the Folly Theater features world-class jazz pianist David Benoit and vocalist Jane Monheit offering Christmas Tribute to Charlie Brown. Good grief.

The Missouri Mavericks have been hot on ice. The minor-league team may have just ended a 14-game winning streak, but they’ll try to start a new one this weekend at Silverstein Eye Center Arena. Saturday is Star Wars night, too meaning costumed characters and promotions galore will get you in a Jedi mood.

Anyone with hoop dreams might like the 20th annual Hy-Vee Shootout. The city-wide high school boys and girls basketball tournament runs Wednesday through Saturday at Avila University, featuring 21 games in all. There’s big boy basketball on Saturday, too. Rockhurst and UMKC will duke it out at Municipal Auditorium, and Kansas plays the Montana Grizzles at Allen Field House.

Tonight at The Midland is the last of the Buzz Christmas shows. Bastille, the up-and-coming headliner, plays flouncy, melodic indie pop. Tomorrow night, there’ll be a very different vibe on the Midland stage. You can get your ballroom on with the Dancing With The Stars. Speaking of reality stars, Adam Lambert first found fame when he finished as runner-up on the eighth season of American Idol. The popster with perfect hair appears tonight at Silverstein Eye Centers Arena, with the a cappella sensation Pentatonix opening the show.

Monday night, although not technically the weekend, there’s a show you shouldn’t miss. The fabulous, incomparable Audra McDonald brings her radiant soprano to KC for an appearance with the Kansas City Symphony, a benefit for Kansas City Young Audiences. McDonald, once hailed by New York magazine as “possibly the greatest singer alive” will perform Broadway hits, standards and songs from her latest album. Does it really matter, though? The woman could sing the phone book and make it sound good.

The Kansas City Zoo set an attendance record this year, and Nikita the polar bear was one big reason why. Now, though, Nikita is moving to a new zoo and it’s time to say goodbye. From 10 a.m. to 2 p.m on Saturday, the zoo is throwing a farewell party for Nikita with crafts, activities, party favors, and zoo keepers sharing their favorite stories of the beloved bear.

Tony Hinchcliffe is best known for his writing. The young comic was head writer for the “Comedy Central Roasts” of Justin Bieber and James Franco, and he has also been a guest on “Last Call” with Carson Daly. See him at Standford’s Comedy Club this weekend. For more family-friendly laughs, head north. Devin Henderson, a self-described “recovering magician” mixes comedy with slight of hand Saturday and Sunday afternoon at 4. Those early show times mean they’ll be plenty of time for you to go out that night see Star Wars. Or maybe, just maybe, dodge all the madness and stay home to watch Tina, Bruce and Amy.