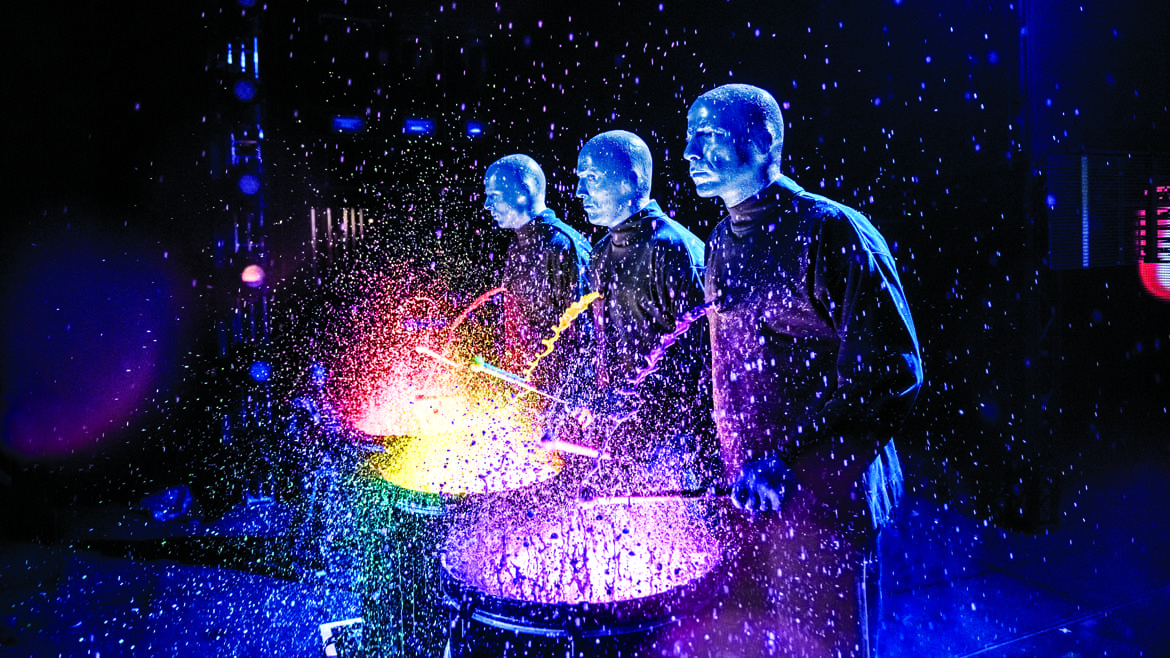 We are officially in the winter doldrums. The lack of light and frigid, slick weather has everybody bummed. But don’t let cabin fever get you down. Or keep you inside. Rage, rage against the dark and cold by getting out and about this weekend.

You can begin your battle against the blues with Blue Man Group. Granted, “three bald guys painted blue” may not be the best recipe for a worldwide entertainment phenomenon. Yet, with ongoing theatrical productions in Las Vegas, Orlando, New York City and Berlin, plus a global touring company, that’s exactly what BMG has become. At JCCC this weekend, you can catch the group’s latest iteration. You’ll see the cobalt trio drumming, of course. You’ll see day-glo paint under florescent lights, video screens, strobe lights, a balloon drop, and who knows what other surprises. There’s intellectual content at these shows, too. The happy but bewildered, alien-like creatures are perplexed, yet amused, by the technological accouterments of modern life. Still, social commentary aside, Blue Man Group is also just a whole bunch of kid-friendly fun.

Quixotic is also no stranger to technology. Where Blue Man Group acts surprised by tech, though, Quixotic displays mastery of it. The Kansas City-based multimedia performance troupe is bringing its latest show, PULSE, to Ameristar casino. Expect a huge drum sound. Expect violin mastery from Shane Borth. Expect sexy women in slinky costumes writhing to cutting-edge choreography. Expect a dynamite light show and, of course, excellence on the trapeze, lyra, cyr wheel, and all the other tools of cirque nouveau.

Need something a bit more bookish? Sara Glass, aka Miss Conception, is having a book release party Saturday night at Prospero’s Books. The writer, rapper and KC cultural stalwart will read from her first book of poetry, “Class Action.” Tickets are $10, and admission includes a copy of the tome.

The theatrically inclined can catch a pair of plays this weekend. “Emilie: La Marquise Du Châtelet Defends Her Life Tonight” is being performed by the Metropolitan Ensemble Theatre. A production of “Pontypool,” the psychological horror show about a low-rent shock jock, is at The Living Room.

Some might call it pandering, but you can just call it classical, cinematic fun. The Kansas City Symphony is celebrating the enormously popular film composer John Williams. The program, augmented by a laser light show, includes well-known scores from “Star Wars,” “Raiders of the Lost Ark,” “Schindler’s List” and more. Special guests include, not kidding, Darth Vader and Chewbacca.

Basketball season in in full swing, but the region’s best team is stumbling. The Jayhawks, having lost to West Virginia and Oklahoma State, are looking decidedly lackluster. KU will try to get right on Saturday afternoon against Texas at Allen Field House. You can get secondary market tickets here.

Or, alternatively, you can see a basketball team that’s virtually assured of victory – even if they don’t always play by the rules. The famed Harlem Globetrotters are touring the world in celebration of their 90th anniversary, including a stop at Silverstein Eye Centers Arena in Independence.

If basketball, real or fake, isn’t your game, try hockey. The Missouri Mavericks are legit. This weekend, the club plays a pair at home against division rival Tulsa.

Or maybe you like motorsports? Gearheads of all ages will want to hit Hale Arena for the Arctic Cat Nitro Arenacross tour. The largest indoor motocross tour in North America, Nitro Arenacross is basically a night of indoor dirt track motorcycle racing. Still, don’t sleep on the trick exhibitions. Who wouldn’t want to see backflips on a UTV? Kids, and anyone who loves engines, are bound to have a blast. Bring earplugs, and come early for the pre-race party with Jason Pritchett, a finalist on “America’s Got Talent”.

Speaking of “America’s Got Talent,” the only-occasionally kitschy reality show is holding auditions in KC this weekend. If you harbor dreams of show business glory, get on down to the Kansas City Convention Center and show your stuff. There’s more information here. If you don’t want to audition, you can always just hang out for a day people watching. That’s bound to be unintentionally hilarious.

For intentional comedy, try Tracy Morgan. The SNL alum and “30 Rock” star suffered severe injuries in a 2014 car crash, but has recovered enough to get back in action. Morgan is not only developing a pilot for FX with Jordan Peele, he’s performing live standup again. That includes a hot-selling show this weekend at VooDoo Lounge.

Brian Dunkleman, known mostly for hosting the first season of “American Idol” is at Stanford’s, while Atlanta’s own Bruce Bruce at the Improv rounds out the comedy calendar. That’s enough laughter, intentional or otherwise, to help anyone battle the winter blues.

— Hampton Stevens has written for a variety of regional and national publications, including the Kansas City Star, The Atlantic, and ESPN the Magazine. Follow him on Twitter @HamptonStevens.