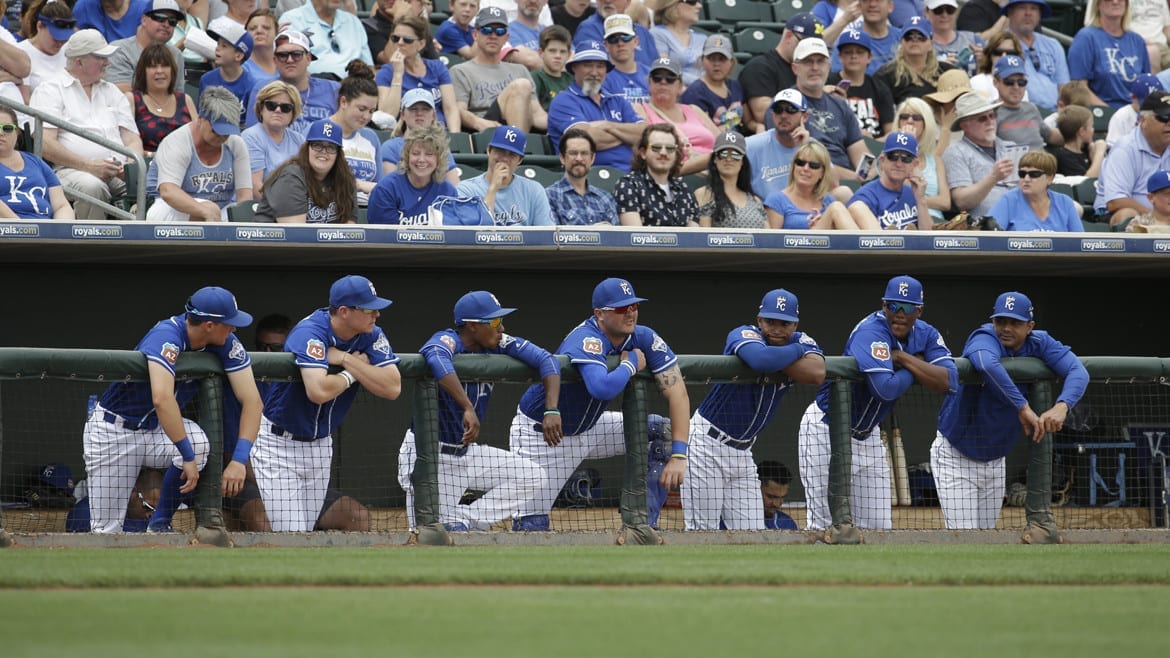 Opening Day at Kauffman Stadium is Thursday against the Texas Rangers.(Darron Cummings | AP)
Share this story

Forget what astronomers tell you. The true start of spring has nothing to do with the vernal equinox. Spring actually starts when baseball season begins. In other words, the sneeziest season starts in earnest this weekend when our world champion Royals play Sunday night. The game, a World Series rematch with the Mets, will be nationally televised on ESPN. Here’s hoping that our boys in blue go 162-0. On Opening Day, after all, anything is possible.

While you’re waiting for baseball to begin, you can warm up with a bunch of other sports. Like soccer, for instance. Head out to Children’s Mercy Park on Saturday night and you’ll see a battle of MSL unbeatens. Real Salt Lake (1-0-2) takes on still-perfect Sporting KC (3-0-0). You can also keep cool with hockey. The Missouri Mavericks are on their home ice all weekend for a pair against the Allen Americans. There’s even college basketball on tap, albeit only on TV. Yes, KU flamed out in the tournament and your brackets are probably long since busted, but the Final Four is still a show worth watching.

When sports fans want to praise the grace and beauty of their favorite athletes, they compare them to ballet dancers. You can see the real thing at New Moves, with dancers of the KCB performing works by contemporary choreographers. The show opens Friday, and there won’t be a tutu in sight. Afterwards, why not wander the Crossroads? Being a First Friday and all, the district’s galleries will be humming. No fooling.

Surely you’ve seen the ads for Shen Yun? The heavily-publicized event is an evening of traditional Chinese music and story-based dance with more than a dash of political content thrown in. The New York-based group, mostly made up of Chinese expatriates and exiles, will be performing all weekend at the Kauffman Center.

As will the Kansas City Symphony. This week’s program, entitled the Mastery of Mozart and Mahler, includes Wolfgang’s beloved Piano Concerto No. 27 as performed by Benjamin Grosvenor. He’s a young British pianist is making his Kansas City debut.

There’s plenty of newer music around town. Electo-funk meisters Big Gigantic are at The Midland. Power popsters We The Kings are at The Madrid. Young guitar master Gary Clark Jr. plays the Uptown. That show is sold out, so you’ll have to head for a secondary seller for tickets. You can still get seats for Ian Anderson, though. Monday night Anderson plays the songs he made famous for Jethro Tull. You can also get seats for Latin Grammy-winner Pablo Ziegler. Saturday night, Ziegler’s tango quartet will bring the sultry beats of Argentina to the JCCC campus. Get there by 7:15 for a live tango demonstration in the lobby.

For entertainment that’s on a spectacular scale, try Sprint Center for Toruk: The First Flight. Cirque du Soleil, for the first time in their mega-successful history, is telling a full-length story on stage – a tale set in the world of James Cameron’s “Avatar.” But, really, who cares about the narrative? The appeal of any Cirque du Soleil show is the skill and pageantry of acrobatics combined with cutting-edge technology.

If, however, you care more about story than special effects, get to a local theater. You have one more weekend to catch The Whale at Unicorn Theater; a dark, snarky comedy about a 600-pound man. There’s lighter fare at the KC Rep. The company is well into their run of The Fantasticks, the musical meta-fable about young love. The always active MET is staging Tall Girls, a story of hope and basketball set in Dust Bowl-era America. If you’ve got kiddos in tow, try Where The Wild Things Are. You probably enjoyed seeing America’s First Couple reading the beloved children’s book to schoolkids, so why not check out the stage version live at The Coterie.

J. Chris Newberg plays guitar, but not with a band. The acerbic comedian has performed on “America’s Got Talent,” as well as the “Tonight Show” and “Jimmy Kimmel Live.” Newberg has also toured with Dane Cook, but don’t hold that against him. He’s at Standford’s all week. Another vet of “America’s Got Talent” plays at the Improv. Piff the Magic Dragon, performs wiseacre comedy magic in a gaudy green dragon suit. No word on whether his Chihuahua, Mr. Piffles, will be in tow.

Finally, why not just get out and enjoy the weather? It’s nonsense, at least to this writer, that telling someone to “go fly a kite” is considered an insult. Kite-flying is a kick. You can get your fill at Kite Fest, way south at the Overland Park Arboretum. Buy a kite there, bring your own, or just come with a camera to enjoy the colorful sky. Admission is $3.00 for adults or a $1.00 for kids. Then you can go home and, just like everyone else in Kansas City, watch the Royals on TV.