A little version of some big art: The ‘Mini Vinnie Bini’ 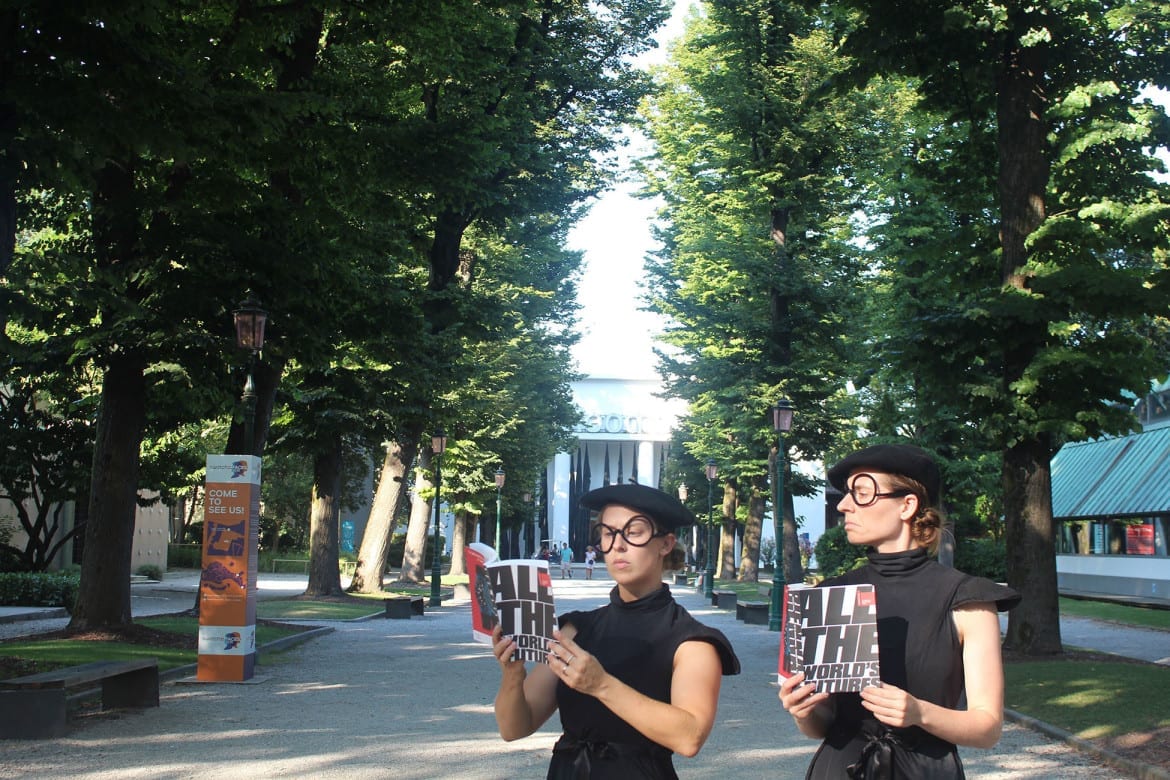 The art collaborative Blanket Undercover, shown here in Venice, Italy, has created a small version of one of the biggest events in the art world, with its 'Mini Vinnie Bini'. The series of installations and events takes place throughout KCK and KCMO. (Photo: courtesy of Blanket Undercover)
Share this story

Since 1895, Italy has been the only host of one of the art world’s biggest events: the Venice Biennale. But this year – thanks to the artist collaborative Blanket Undercover – a little bit of the Biennale is coming to Kansas City.

The Mini Vinnie Bini, open through Jan. 1, 2016, is a small-scale reproduction of works originally shown at the Venice Biennale. It’s installed in sites throughout Kansas City, Kansas, and Missouri.

“Some of the pieces we’ve made are an interpretation, some we’ve recreated physically,” said Megan Mantia, co-founder of Blanket Undercover. “But for the most part we are trying to re-present them exactly as they are.”

Blanket, comprised of Mantia and Leone Anne Reeves, traveled to Venice in July and spent a week meticulously documenting every artist and artwork being shown — no easy task given the Biennale’s massive scale.

“It’s thousands and thousands of pieces of artwork,” said Reeves. “I have roughly 10,000 photographs from that trip,” said Mantia.

The bi-annual Venice Biennale features artists and artworks from 89 different countries exhibited all across the city.  But it isn’t just size that makes the Biennale one of the biggest stages in the international art scene. The event has long been lauded for exhibiting what many consider to be the most important names in contemporary art.

Visitors to the Biennale can view the work in two main pavilions – the Giardini and the Arsenale – but can find work in many non-traditional spaces as well.

“You get to go into all these old palazzos around the city, and people’s homes, and churches and businesses – all public spaces that have allowed artwork in there,” said Mantia. “It’s really incredible, and moody, and creepy.” 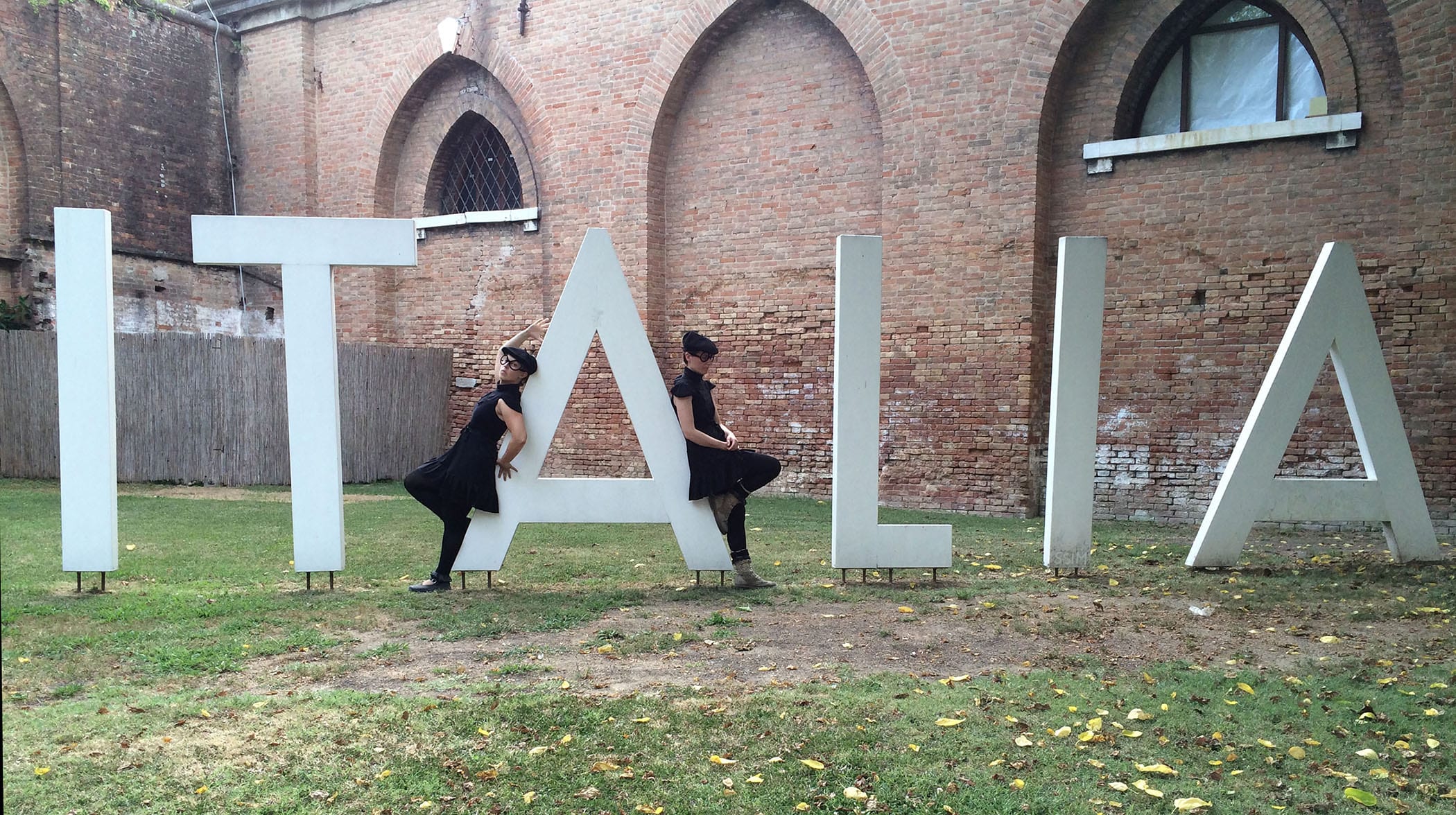 The use of non-traditional spaces is something that Blanket has incorporated into the Mini Vinnie Bini installations as well. To help audiences find all 30 installations (a number that could reach as high as 60 throughout the exhibit), Blanket created a detailed map of Kansas City identifying all the specific sites, and is also placing “pin drop” diamonds outside of installations to signal that a Mini Vinnie Bini work is located nearby. While some pieces are in more traditional gallery spaces, work is also being shown in businesses, homes, and even on their own front porch.

“It addresses – in a delightfully humorous way – the discussions that center around what it means to have access to ‘high art’ and what it means to live somewhere that is often referred to as a ‘fly-over’ city,’” said Julia Cole, program coordinator for Rocket Grants, which funded Mini Vinnie Bini with a $6,000 grant. “The project itself is living proof that such places often offer possibilities for provocative creative engagement that could not happen elsewhere, and the venues they have chosen fundamentally challenge art as an elite activity.”

While Blanket Undercover is self-described as “seriously silly,” their Mini Vinnie Bini encourages meaningful conversations with a great deal of sincerity.  This year’s Biennale, curated by Okwui Enwezor, the first African-born person ever chosen to curate the event, took the title All the World’s Futures, and firmly focused itself on a globalized trend of unrest.

“How can the current disquiet of our time be properly grasped, made comprehensible, examined and articulated?” wrote Enwezor. “The principal question the exhibition will pose is this: How can artists, thinkers, writers, composers, choreographers, singers, and musicians, through images, objects, words, movement, actions, lyrics, sound bring together publics in acts of looking, listening, responding, engaging, speaking in order to make sense of the current upheaval?”

It is that conversation that Blanket hopes Mini Vinnie Bini will continue in Kansas City with pieces like “Regular Places” by Ukrainian artist Mykola Ridnyi.  In his videos, Ridnyi shows seemingly ordinary public spaces in the city of Kharkiv and overlays them with audio from violent clashes, between students and the military, that took place in those spaces.

“You see what looks like a regular place, but over it you hear these horrible things that are happening,” said Reeves, “You don’t know exactly what has happened, but you can imagine.”

In its  installation of “Regular Places,” up now at FOKL in Kansas City, Kansas, Blanket Undercover combines still images of Ridnyi’s original work, with similar still photos of Kansas City – all seemingly ordinary spaces that were the site of violent events.

“We picked three horrible things that we knew had happened in Kansas City, one of which happened to our friend,” said Reeves. “We used Google Street View images of those places, which look just like a parking lot, or the side of a highway, and put exactly what happened over the images.”

It’s a sobering juxtaposition that highlights our own connections to the issues of a global community.

“The entire purpose of us bringing this here is to be the medium that extends the educational purpose of this exhibition, and to show how important the conversations going on there are,” said Mantia.

“And how much they relate to us here, right now, even in the middle of the country,” added Reeves.

It isn’t just the content Blanket hopes will spark conversation, but the Mini Vinnie Bini itself.  Their re-creations of the works of other artists tap into conversations of authorship, appropriation, and originality that have become increasingly more prevalent among artists.

“We are always asking questions about appropriation, always,” said Reeves. “Being at the Biennale we saw so much that was a photo, or a video, taken from the internet. And then it’s just like, ‘Here’s the art’,”

It’s a conversation even Reeves and Mantia don’t always agree on, and one they will be presenting at a debate they have scheduled as part of Mini Vinnie Bini’s events programming.

“I’m a documentarian at my core more than any other type of artist,” said Mantia. “So appropriation and re-contextualization being a process of its own is always a big debate for me.”

Wherever you land in that debate, one fact remains: When the Venice Biennale closes in November, Kansas City will be the only place in the world this work can be seen.

This story is part of a reporting project produced by UMKC journalism students as part of an education collaboration between KCPT’s Hale Center for Journalism, KCUR, and UMKC.