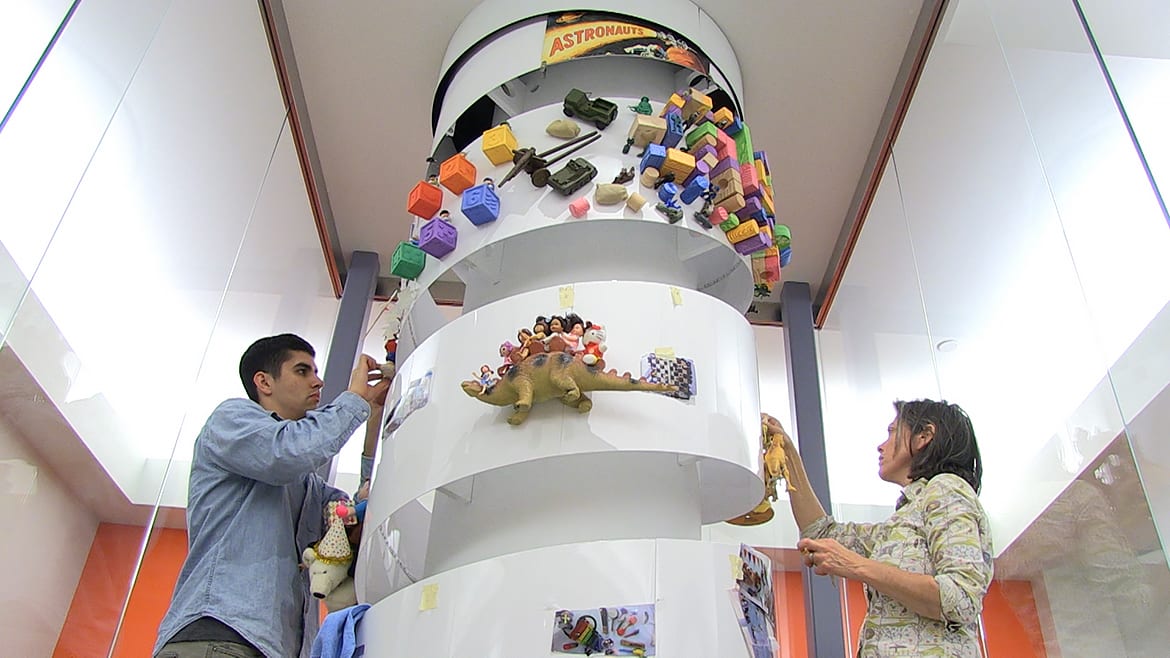 Toytisserie at the National Museum of Toys and Miniatures, photo by Julie Denesha.
Share this story

The National Museum of Toys and Miniatures closed their doors to the public 18 months ago to renovate and redesign the exhibit space. When the museum reopens in August, a spinning metal ribbon covered with more than one thousand toys of all shapes and sizes will be the focal point of the new lobby space.

“We collected all the toys from the community, which we thought would be a great way for the community to have an interactive element in the museum’s renovation process,” said Jamie Berry, Executive Director The National Museum of Toys and Miniatures. “We basically asked for toys that would fit into the palm of your hand. At the end, we ended up with ten, 55-gallon barrels full of toys. So we collected all these toys, cleaned them, sorted them, and then Sarah went through and started to create scenes.”

Sarah Lugg Regan is the artist tasked with bringing the Toytisserie to life. “This Toytisserie is in the entrance of the museum — will greet all the visitors when they first arrive,” said Lugg Regan. “And hopefully will attract their attention to scamper upstairs and see the rest of the exhibits of toys.”

Lugg Regan’s assistant Ben Breslow reached into a box to pick up a Stegosaurus covered with dolls. “If you look on the Toytisserie you will see toys from all over,” Breslow said. “They were donated from people around Kansas City, and we’ve tried to get a nice accumulation of toys to represent different genres of toys and different eras.”

“The concept is based on a giant barber’s pole,” said Lugg Regan. “You see outside old fashioned barber’s shops that turn around, around around and that is the concept behind this huge just over 100 foot metal helix.”

“I think what’s interesting to me about the Toytisserie is that it’s a microcosm of the experience here at the museum,” Berry said. “People love our collection because it’s so approachable.We have tiny things which are the miniatures and then you have toys which are things you played with as a kid. So anybody can come in and find something that they can connect with.”

Toy ‘scenes’ are inspired by the creativity of children

“I like the way that children create their own worlds when they are playing with the toys,” said Lugg Regan. “I remember as a child in my bedroom I had rows of shelves and I used to like arranging little groupings of objects and creating scenes. So, I was in preparation for this job many, many years ago.”

Lugg Regan seized an Incredible Hulk from her workbench and began the process of testing where he would fit into a scene of battling comic book characters. “The process is you choose a toy, and then drill in and attach a magnet; so very laborious,” said Lugg Regan. “One has to pay attention 100 percent when working with each object.”

Dealing with a diversity of material

“There’s several materials that we are dealing with here, there’s wood, there’s plastic, there’s ceramic, there’s paper and card,” Lugg Regan said. “And also there’s a different ages of the toys that we’re attaching. Some of them are old vintage and some are new. I think this is the most time-consuming things I have ever worked on.”

“Toy manufacturers weren’t really designing toys for us to put them up on this twisting sculpture,” said Breslow. “So the inconsistencies in materials and knowing what tool to use is probably kind of the biggest obstacle, but it’s definitely something that we’ve overcome and over time during the project we’ve kind of developed a rhythm where we could say, ‘oh, this thing is a squishy toy animal, we probably shouldn’t use the drill on this.’”

“At first I was daunted by the scale of it,” Lugg Regan said.  “I mean, this is like a giant mural. I’ve never worked on something of this scale. And yeah, I do remember the first morning I walked in and was just surrounded by all these cardboard boxes and I just took a deep breath and said, ‘OK! Let’s just start with this box.’”

“I think probably in just about every scene there is some little tiny detail that I love. I think that there may be a few details that people might not notice or maybe will notice in time,” said Lugg Regan. “Like in the castle scene just behind the Stegasaurus, there’s a little mouse hole because every castle has a little mouse door. You know, it’s not complete without a little mouse door with a little mouse poking his nose out. Which within the thousands of toys, that’s kind of a crazy detail.”

“A lot of the toys we’re trying to have directional movement so one toy will be moving a certain direction to kind of help with the flow of the sculpture,” Breslow said. “There’s an interaction of toys wanting to check out other scenes and so it’s kind of a lot of fun.”

“It could always have more,” said Lugg Regan. “But also it could have less on there as well. So, it’s a fine balance of knowing when to stop. The hard thing is just knowing when it’s time to just step back. I am going to have to just make myself go, ‘Stop! Ok. That’s it!  You just pull up the drawbridge and step away from the Toytisserie, Sarah. You can let go.’”

“This has been a really cool opportunity to kind of pull back these memories of these toy. For one, we’re drilling holes in these memories, but we’re also being able to play again as an adult, which is a real cool thing,” Breslow said.

“The Toytisserie kind of encapsulates what we hope will be the experience,“ Berry said. “You see stuff on it. You start to remember. I guess you get to engage your childlike sense of wonder which is something we are all about here.”

“It’s been really fun and has let me revisit my childhood,” Lugg Regan said. “I hope people enjoy it as much as I have.“

Julie Denesha’s story on Toytisserie at the National Museum of Toys and Miniatures will be featured on the next episode of Arts Upload on KCPT.