‘The last piece of the puzzle’: Long-term gay couples make their commitments legal in KC 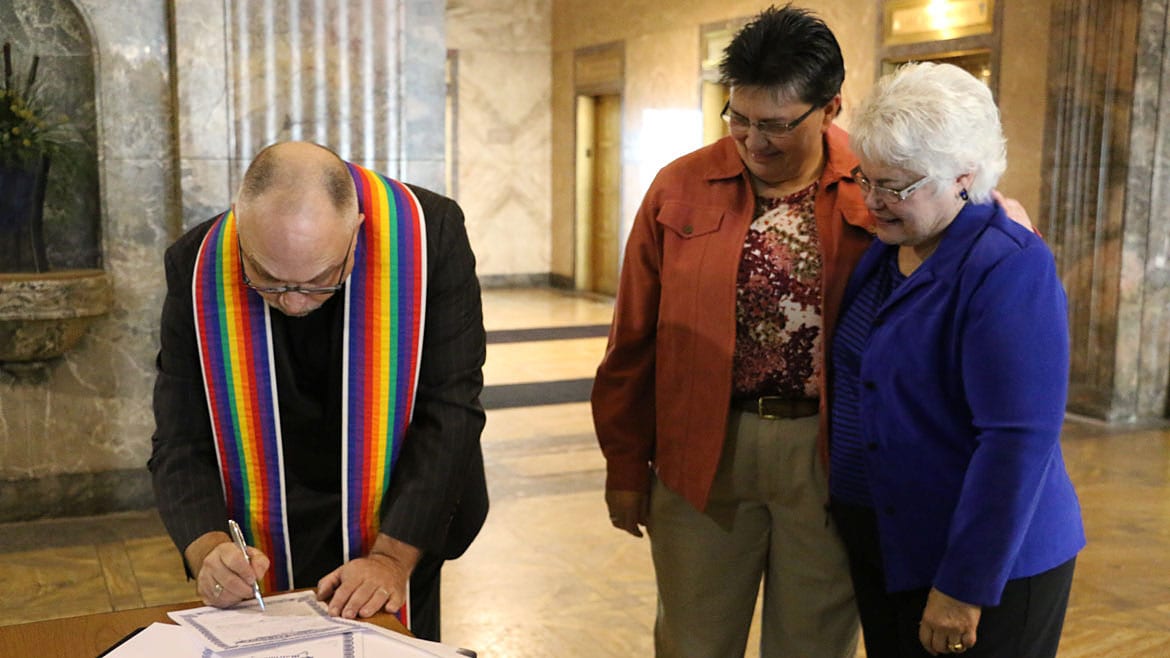 Donna Botts and Terri Guillott are used to waiting.

The women have been a couple for 14 years, committed themselves to each other in 2007 and, now, minutes before making that commitment legal, they’re waiting for the photographer from their small town’s local paper to document the wedding.

The couple stands in the lobby of the Jackson County Courthouse in Kansas City, Missouri. They have driven thirty minutes from their home in Kearney, Missouri, in Clay County. The photographer, Dave Hon of the Kearney Courier, arrives only a few minutes late. He’s slightly out of breath, but excitedly asks the women, “Did you hear Clay County just started issuing marriage licenses?”

Botts and Guillott look at each other, and, after a beat, burst into laughter. It makes a perfect kind of ironic sense that, after waiting to get married in their home state for so many years, their home county would begin marrying gay couples right as they’re about to say their vows in the neighboring county. Guillott, a minister, said God had a hand in she and her wife getting married in Jackson County.

Botts and Guillott think of their 2007 commitment ceremony as their wedding: They had a big party and friends, family and their six kids were present, but today is also special and important.

Donna Botts (left) and Terri Guillott exchanging vows in the lobby of the Jackson County courthouse. (Photo by Bridgit Bowden/Hale Center for Journalism)

Missouri Attorney General Chris Koster announced Friday that an appeal to protect the ban on gay marriage would be filed with the U.S. Eighth Circuit Court of Appeals. Many couples, like Gann and Rodricks and Guillott and Botts, rushed to apply for a marriage licenses during this open window.

Botts said she will be disappointed if Judge Smith’s ruling is overturned, but it won’t matter in the long run.

“It would be disappointing, but eventually it will turn around,” she said. “And, if we have to do it again, we’ll just have another big party.”

She’s referring to their commitment ceremony, where they exchanged rings that were, seven years later, blessed as “symbols of true faith” at their wedding this morning.

Botts and Guillott began planning their wedding on Friday, right as the news of Judge Smith’s ruling broke. They thought of everything except witnesses, and a last-minute Facebook post this morning brought Lynn Hill and her husband, friends of Botts and Guillott’s daughter.

“When it came on the news, it was automatic for us,” Guillott said. “‘When can we go? Can we go Monday?’”

Another couple well-used to waiting is Stavros Georgeulakos and Silvestro Battaglia. The men have been together for 35 years and got married in Iowa in 2011.

Georgeulakos and Battaglia got married this afternoon at the Jackson County Courthouse. Since the men are already married, today’s ceremony was symbolic: Georgeulakos said it was to prove a point.

The couple was married by Vernon Scoville, who married Gann and Rodricks Friday. Scoville is a retired associate circuit judge who was called in for this influx of wedding ceremonies.

“I thought it would be an honor to do so,” he said, “so I grabbed a robe, got in the car and came over here.”

Scoville married Georgeulakos and Battaglia as part of a line of other gay couples Friday afternoon.

“We lived through the ‘80s (AIDS crisis) and everything you’ve seen on T.V. and in the movies,” Georgeulakos said. “We’ve lost the majority of our friends from when we lived in New York.”

Both Georgeulakos and Battaglia are HIV-positive.

“The reality of it is that we’re of an age where most of the people that we knew that were living that life are dead,” Georgeulakos said. “We are truly lucky to be standing here. We lost so many dear friends that I can’t even begin; it’s too surreal.”

He said that neither he, nor his husband, were sure if this day would ever come. The couple was considering leaving Kansas City.

“I thought, ‘If we can’t have gay marriage here, then I’m not going to worry about having a nice life here,’” Georgeulakos said.

The couple plans to stay in KC now that Missouri recognizes gay marriage.

“It means a great deal. It means real acknowledgement,” Georgeulakos said. “We are staying because it means we exist here. Before, we didn’t exist.”