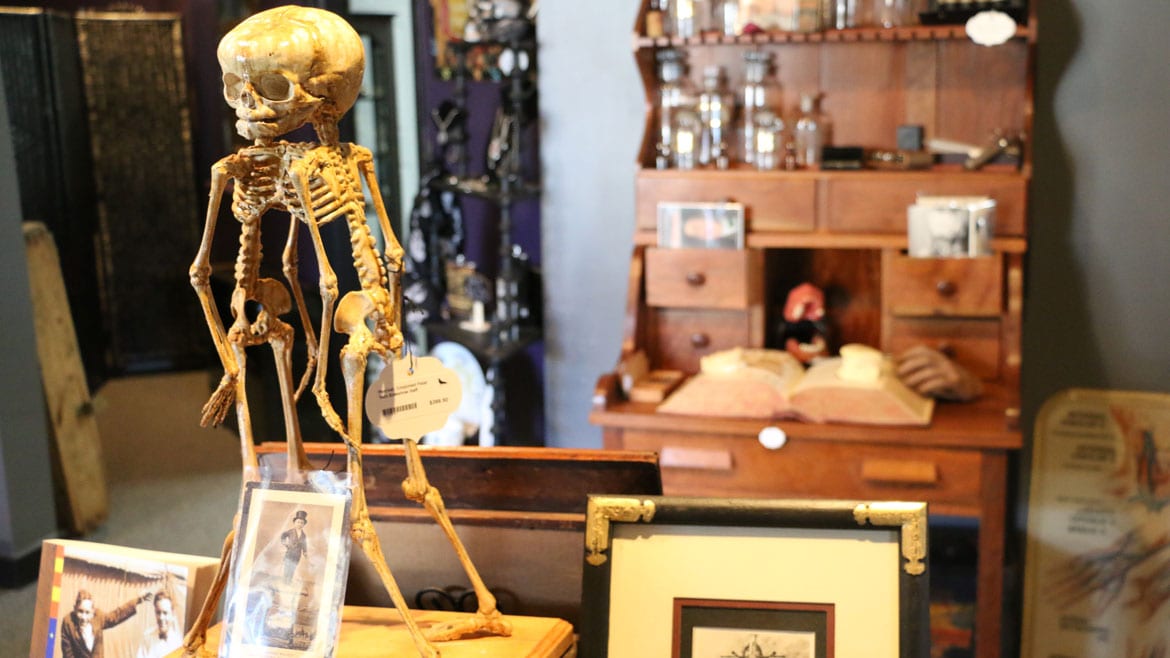 This art piece of conjoined twins is by R.A. Miness, an artist whose work has been featured on FX's "American Horror Story." The piece, named "Percival," is for sale at Noir Arts and Oddities on W. 39th Street. Photo: Caitlin Cress, Flatland
Share this story

If you’re in the market for a 19th century skeleton (his name is Vincent), a preserved baby shark or a Victorian doll without eyes, you can find all of the above at Noir Arts and Oddities on W. 39th Street.

Owner Pam Smith works hard to curate the aesthetic of the store, which she calls “Victorian, but with a modern twist.” She wants to dispel the notion that the store — which is full of weird and creepy things — is a “Halloween” thing.

“I see it as an intersection of where history, science and art (meet),” she said of the wares in her shop. Smith said the Victorian era saw a lot of medical and scientific breakthroughs, and the weird and wonderful relics of that time help to document the period.

“I’ve always been fascinated with the Victorians, and they were really weird people,” she said.

Shoppers can purchase postmortem photographs, medical instruments and taxidermied animals, some of which are authentic Victorian antiques. Whether or not the piece comes from Victorian times, all of the pieces fit into Smith’s “dark Victorian chic” aesthetic.

Smith said she has always been interested in what her mother calls “dark” antiques. Smith recently began watching the Discovery Channel show “Oddities,” which features an NYC antique store with much the same aesthetic as Smith’s. She credits this show and FX’s “American Horror Story” in part with bringing interest in weird ephemera to the masses.

“American Horror Story” is continually featuring different strange pieces from different time periods. Smith has two pieces by artist R.A. Miness, who created props for “AHS” season one. These pieces — a skeleton of a conjoined twin and a freakish baby doll — look like they could have come straight from the most recent season of “AHS,” which was set in a ‘50s-era freak show.

Smith has curated some freak show–related pieces around the two Miness items. This section is in addition to sections featuring medical and dentistry, war relics (curated by her 15-year-old son, Zane), natural sciences and art, funerals, and more.

Smith remembers going junking with friends and being drawn to a different type of antique: “Everyone’s buying the painted dressers or the flowery dishes, and I’m the one going, ‘Where’s your weird stuff?’ I’m not looking for things that everyone has. I have to scour.”

“I didn’t necessarily feel alienated before,” she said, “but I really didn’t realize how many other people out there were interested in this stuff.

“There’s this whole sense of meeting these people who have similar interests and tastes. My mom and my sisters think, ‘You’re dark,’ but people come in here who have felt the same type of — not alienation — but that feeling of being outside and thinking you can’t say what you really like because people will think (you’re) weird,” she said. “It’s brought this sense of unity, a sense of community to show that maybe you’re not so strange after all.”

Visit the Noir Arts and Oddities Facebook page for more info about the shop, including upcoming special events with local artists.