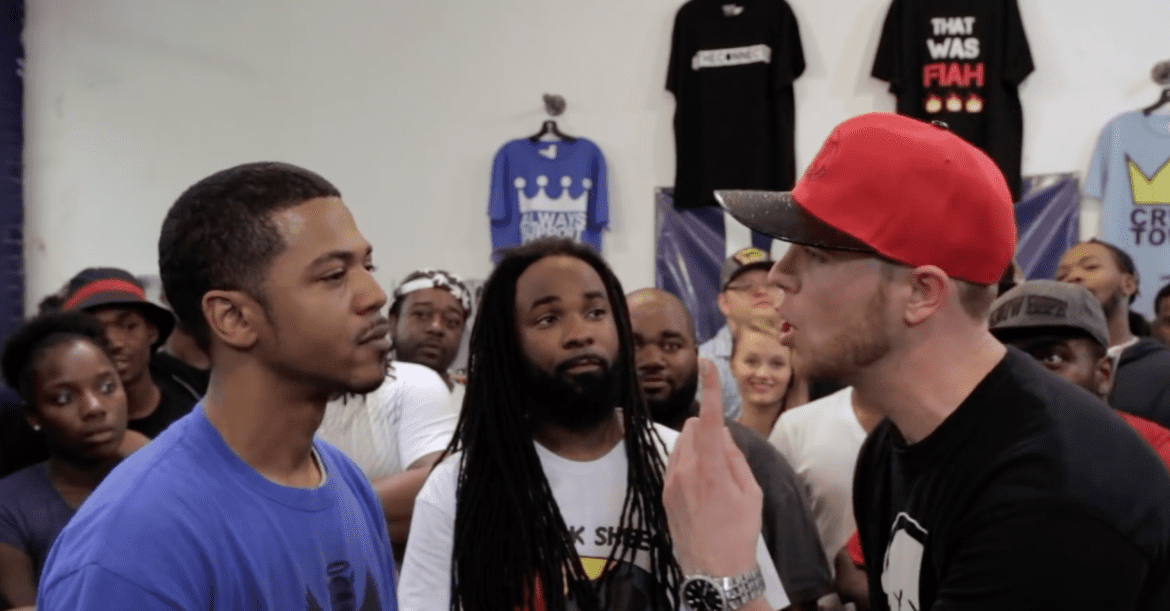 Jarvis Jones (center) watches two contenders in a rap battle at The Connects. (Courtesy of The Connects)
Share this story

If you turn on commercial radio or check the pop Billboard charts, you’ll see any number of performers who represent themselves as hip-hop artists. But many of them offer only a carefully-crafted street image and a few stanzas mumbled over (usually poorly produced) beats. If you look a bit closer, you may find that the majority of the modern hip-hop landscape is a pathetic shadow of the real body of talent that exists today.

Sympathetic Vibrations | Remembering Phife DawgIt was a rough Wednesday morning for hip-hop enthusiasts like me, who learned that Malik Taylor, aka Phife Dawg, aka The Five Foot Assassin, had passed away at age 45. The MC was best known for his work with A…

Fortunately, in a few shadowy clubs, warehouses and venues around the world, one of the last standing pillars of hip-hop culture is being honorably and painstakingly kept alive: the rap battle.

And this Sunday, at the Riot Room, The Connects, Kansas City’s rap battle flag-bearers, will put some of that talent on stage for Crucial Conflict 3: Money Time – where some of  KC’s best battle rappers will be pitted against a host of out-of-town opponents.

Jarvis Jones, who helps organize and host The Connects’ events, remembers battle rap’s humble beginnings – when the street corner beat battles were how rappers made a name for themselves and battling had a way of weeding out the type of music you hear on the radio these days.

“Back then you had to battle to get a [record] deal. Can you imagine if that was still the game now?” Jones said. “If the music was real whack, we wouldn’t ever hear it. Nowadays, the money is just given to them. And none of these modern rappers would take the risk to battle, because if they lose, they could lose their credibility.”

The format for the modern rap battles is a little different than the beat-backed freestyles portrayed in “8 Mile” and MTV’s “Wild N’ Out”. Now, battle raps are acapella and typically follow a three-round format, with the rappers trading rounds.

In content, battle rapping is not too dissimilar from a hip-hop track. Battle rappers similarly boast about fame, success and strength. But a rapper’s real talent comes through in the writing, or “pen”, and employing a dizzying array of creative rhymes, jokes, schemes, metaphors and wordplay. The best rappers use information about their opponents against them. Still, even after the insults and barbs, each bout ends with a handshake and a hug as a mutual sign of respect.

Most of the Connects’ battle rap catalog lives on, courtesy of YouTube – where it can be mesmerizing to watch the politics and protocol of each battle. Many times, a battle has layers and themes that can only be understood through multiple views. Case in point: the scheme put together in this round by A.Ward, one of the city’s brightest rising stars.

Ward, 32, who will battle in the main event on this weekend’s card, went from spectator to competitor in 2015. Originally from Tennessee, Ward moved to Kansas City to attend Kansas Christian College, where he studied youth ministries and played basketball. He made a name for himself on the scene by trading bars with the performers outside of Connect events before he decided to jump in the ring himself.

Now, his videos have the highest view counts on the Connects YouTube channel. He also has a host of upcoming international battles, earned a spot trading rounds with one of the industry’s legends and became a regular at King of the Dot, a prestigious Toronto-based battle league.

And he does it all without cursing or glorifying violence, while at the same time promoting a faith-based message. In fact, Ward sees battling itself as a type of ministry. But that doesn’t mean he pulls punches.

“I have to think of creative ways to attack my opponent without demoralizing his character,” Ward said. “At the end of the day if I say something that’s on footage that could really turn somebody off to what I stand for, then everything I’ve done is in vain. But I want to win. Steph Curry is a Christian, but if he crosses you up, he still might look at you and laugh.”

For a rapper like Ward, battle rap provides an international avenue to communicate his message. Other rappers are looking to network or promote their music. But for a select few, battle rap can be a career – earning them thousands of dollars for a single battle.

Despite breaking a major battle rapper, the Connects isn’t quite there yet. It’s mostly a labor of love for its co-founders, Chapo Escobar and Art Pecina.

“It’s about the love of the culture,” Escobar said. “I don’t know exactly what that love is. Maybe it’s just helping each other out. I know what struggle is. I just got out of prison, so I know how it feels to want to have something in your life to keep you from going down that road again. So those rappers’ love and motivation is what keeps me going.”

For many years, hip-hop was sensationalized for all of the wrong reasons, and now the artists that dominate the business are famous for all the wrong reasons. But in its purest form, hip-hop has the power to change lives, motivate and inspire. And looking at the battle rap scene in KC, it’s comforting to know that these folks are out there still battling for the culture.