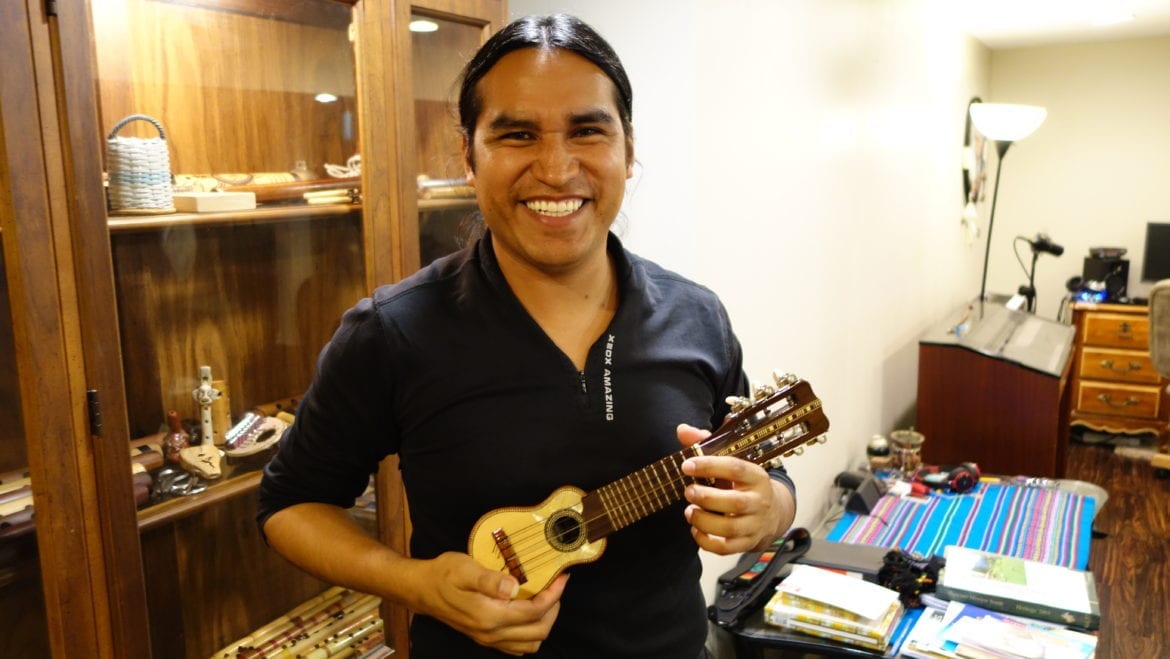 Amado Espinoza holds a "baby charango," one of the many instruments the Bolivian-born musician plays in Kansas City. Click the audio link to hear him play it. (Dan Calderon | Flatland)
Share this story

Fate came knocking in Bolivia in 2011 when artist Amado Espinoza was invited to compose music for a project by director Karen Lisondra, an American who had travelled to Bolivia from Kansas City. The two collaborated on the theater project and fell in in love during the process. Their show premiered in Bolivia in 2012, and the two moved to the KC area in 2014.

And Bolivia’s loss has been Kansas City’s gain.

In the three years Espinoza has been in Kansas City, the versatile, cutting-edge artist has flown mostly under the mainstream radar, yet enjoys significant notoriety among local musicians.

While his music has unmistakable Andean roots, it also incorporates an array of international music and influences – a nod to Espinoza’s many years spent traveling and being a student of other cultures. The resulting music is a blend of traditional and contemporary sounds that is unlike anything else being made in Kansas City.

Espinoza, now 36, was born in Cochabamba, a small city in the Bolivian Andes known mostly for its temperate climate and booming agriculture. At age 8, he joined the school military band and played “siku,” the Andean pan flute, and found a surprising predisposition for it.

“I was just fascinated with it,” Espinoza said. “I tried playing all different kinds of music and it was all very intuitive. I could hear it all in my head. I was very tuned to play.” 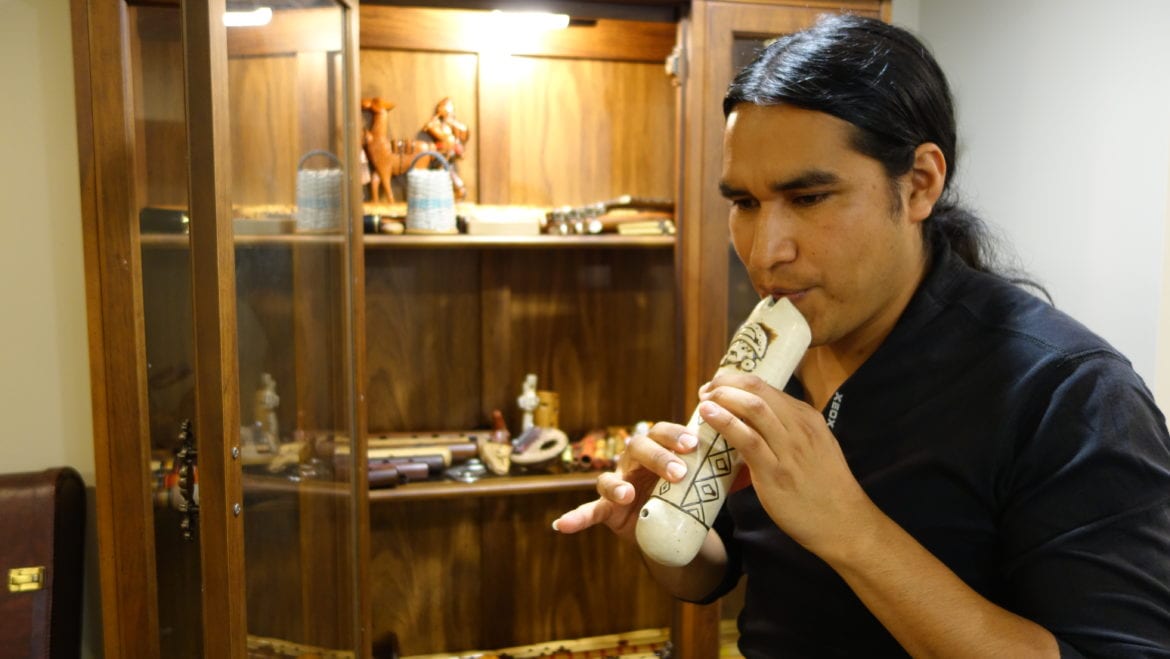 Much of Espinoza’s youth was spent teaching himself to play music. In addition to siku, he also learned to play the “quena,” a wooden Andean flute, and “charango,” a small Andean stringed guitar-like instrument that sounds similar to a mandolin.

Enrique Chi, lead singer of Making Movies, described Espinoza’s ability to play music as though it were something beyond bare talent.

“The thing that I’m most impressed with about him – whether he’s playing cajon, flutes, or charango – he seems to get to this place of really pure, honest expression,” Chi said. “Regardless of the song he’s playing, or whether it’s a cover or an original. He seems like you could throw him in any environment – like the background of a community center luncheon hall and he’ll still go all the way into that deep, spiritual part of music. That button or switch just turns on in him.”

By age 16, Espinoza had graduated to study at the Conservatory Milan in Cochabamba, where he studied classical instruments like guitar and piano and learned how to read sheet music. He ultimately left the Conservatory before completing his studies – in part because he had outgrown the program, but also because his education had opened his mind to the expansive world of indigenous instruments.

“I’m interested in indigenous instruments because they have roots,” Espinoza said. “For me, it’s important that these instruments tell stories about the people and cultures and not just have a musical purpose. I want to transport my audience to these energies and places.”

Espinoza travelled all over the world to learn more about these sometimes ancient instruments. Along the way, he began collecting and restoring many of the pieces he had encountered. The collection became so massive that he opened a museum of instruments in Quillacollo, Bolivia, housing more than 500 instruments from six continents.

The process helped Espinoza learn how instruments are made, to the point that he frequently crafts many of his own instruments – both to use and for sale. The practice began when he was still living in Bolivia, and mainly out of necessity. Many of the instruments Espinoza wanted to learn to play were simply not available in his home country, so he would make his own. And his skill grew slowly through trial and error. 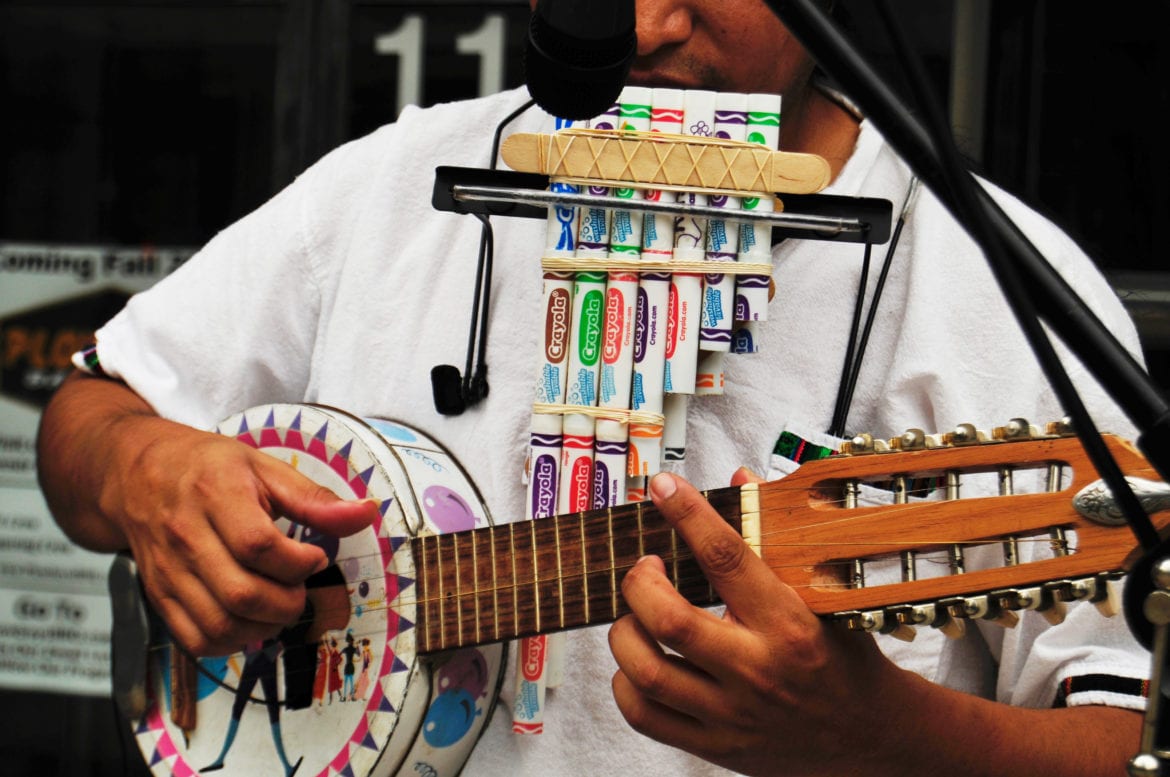 Since moving here in 2014, Espinoza has been invited to perform at TedxKC and official showcases at the Folk Alliance International Conference. He has also collaborated with a number of Kansas City artists, dancers, and bands who look to incorporate his unique fusion of sounds into their own works.

Espinoza says this fusion of sounds is a driving force for his new musical project, The Amado Espinoza Trio, which features Espinoza, percussionist Andres Ramirez, and violinist Tina Bilberry. Espinoza likened the new band to a mix between Bela Fleck and Jimi Hendrix. The aim is to meld contemporary, electric music with traditional folk sounds. He is currently in the process of composing tracks for the trio’s first album, which he hopes to release later this year.

“I don’t have limits in my creativity,” Espinoza said. “I want to play music all my life. And I especially want to play the type of music we play, because it doesn’t have a any specific genre or style. It makes for a good ensemble and it’s very gratifying as a musician.” 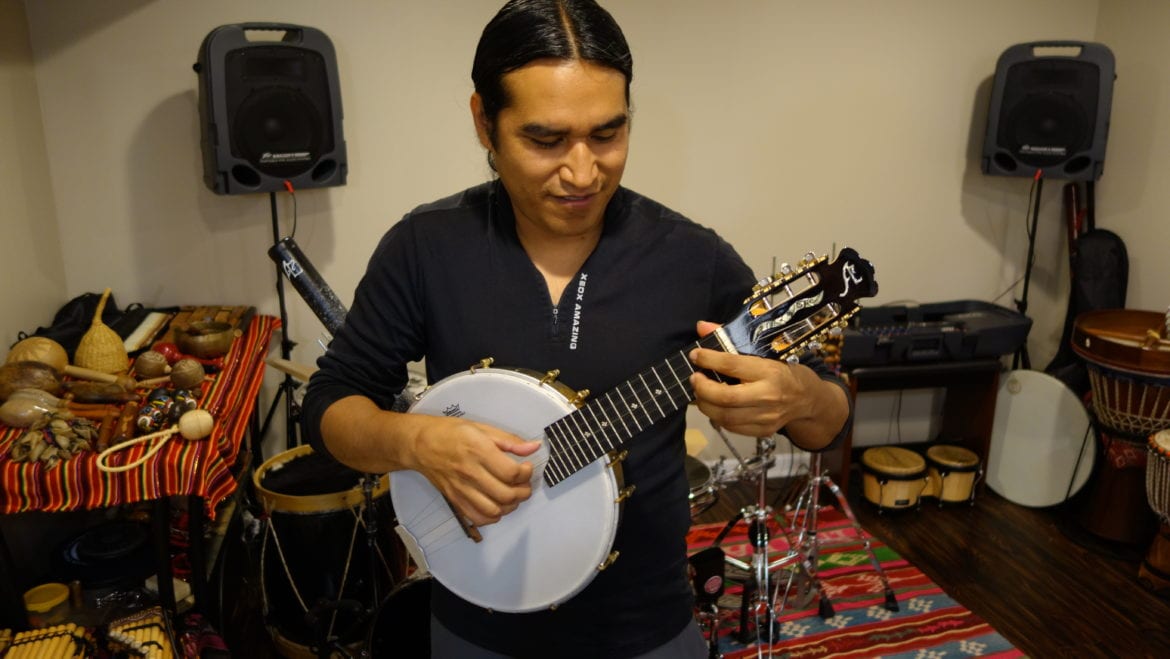 Together with his wife Lisondra, Espinoza shares his wide knowledge of indigenous instruments, dance, and cultures through educational programs at local schools, museums and libraries. Many of these programs involve telling stories about civilizations all over the world through their arts. The two also teach a program that encourages students to recycle and repurpose household items to make instruments, like rainsticks and kazoos. Espinoza often uses his own creations during weekend street performances around town.

Local singer/songwriter Mikal Shapiro met Espinoza not long after he moved to Kansas City and almost immediately joined forces with him in local latin fusion band Ayllu. Shapiro said their first rehearsal together included a notable language barrier and an immediate feeling of inadequacy.

“His technique is impeccable. He’s obviously worked at it for a number of years. He’s a master at his instruments and I felt intimidated of course,” Shapiro said. “But he’s so smiley, friendly and warm. And his philosophy is that music is both its own language and a creative force that connects people. That became apparent in playing with him. So some of that anxiety melted away in the process of learning songs together.”

During his short time in KC, Espinoza’s musical reach has been significant. At a time when modern metrics drive so much of the conversation around success in music, Espinoza’s unwavering dedication to his craft and vision have allowed him to make a career out of his music. And that’s a level of success he’s been able to create and enjoy on his own terms.

Espinoza’s talent and flare for collaboration will be on display this Friday for KKFI Collaborations Live!, a performance that will pair musicians across multiple genres for a night of music at the Folly Theater (300 W 12th St). Espinoza will team up with Hot Club of KC and their vibrant brand of gypsy jazz.