Sympathetic Vibrations | How My Kid Learned to Rock 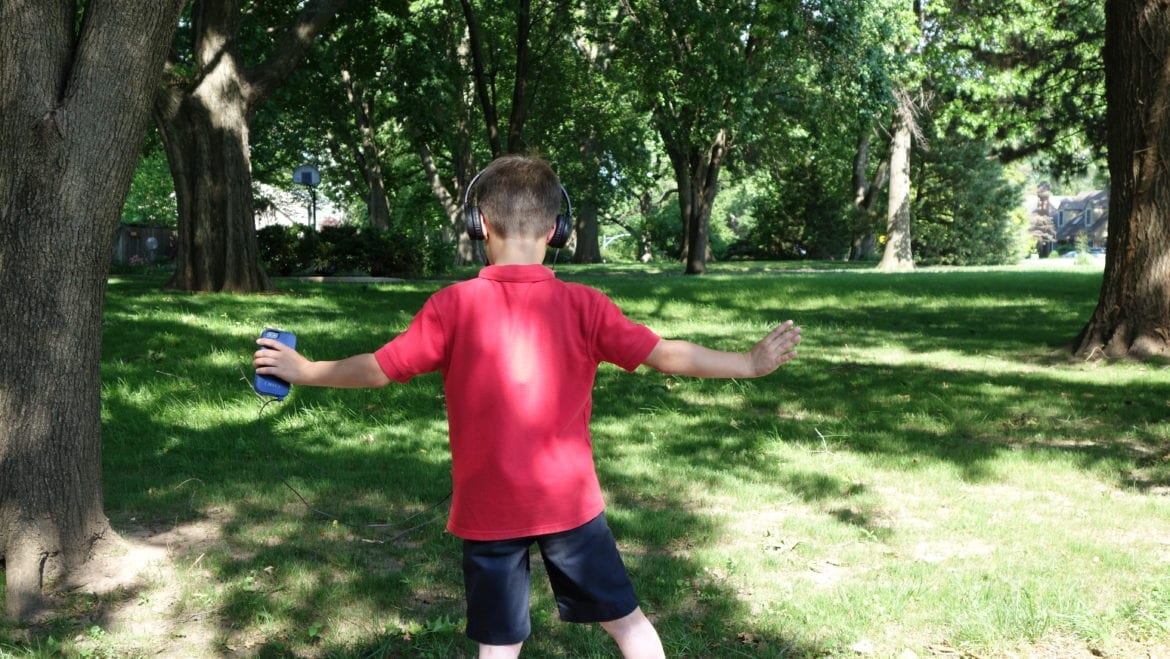 What I learned from getting my kid to love music? Get out of the way. (Dan Calderon | Flatland)
Share this story

My son Charlie is 6 years old. And when he’s not playing sports or setting indoor decibel records with his sister, he’s usually walking around our house with headphones on, jamming to his own handpicked tracks on an old, decommissioned iPhone.

As a music lover, this makes me a proud daddy.

But it wasn’t easy. And getting him there involved an unexpected path that ultimately rendered meaningless every outlet I employed to actively mold him into a music lover in my image.

So, in the spirit of the “it takes a village” mantra, I’d like to share my findings – in the hope that other new-ish, undoubtedly still-hip parents can learn from my mistakes in their efforts to create their own mini-Lester Bangs.

To begin, I should say that becoming a parent created a sense of duty in me that transcended the basic roles of responsible parenting. If you read this column with any regularity, you’ve gathered that music is a big part of my life. And when my wife and I had kids, I wanted it to be a big part of my kids’ lives too.

But as many parents (and South Korea) can attest, trying to get an irrational, selfish tyrant to do anything can be a challenge – even when his very health and well-being desperately depends upon it.

My first route was subtle. Let’s face it, kids music generally sucks. It’s shrill and annoyingly upbeat. We had a strict “no Barney” policy in our house, instead finding kid versions of music we liked and letting our kids watch music videos. Your mileage may vary.

One great source was the “Rockabye Baby” series of albums, which are lullaby versions of all manner of adult music, from the Beatles to Iron Maiden. The Radiohead album, in particular, got a lot of play in our nursery, but my son couldn’t pick “Paranoid Android” out of a playlist if his life depended on it.

Another great option is family dance parties. Old Motown, R&B, and modern dance tracks work well here. Move the couches, crank the volume, and have at it. Kids love to dance and watch their parents have fun. And it’s likely the only place in the world where the Elaine Benes-inspired, gawkish writhing you call dancing is welcomed. Our son has fond memories of our dance parties, but when he heard “Dougie” last week, he seemed to have forgotten he had already been well-educated on the subject, so that didn’t stick either.

I thought, maybe if he learned to play? A lifetime ago, I played guitar and performed on stage. I still play infrequently around the house, where my son usually sits front row. When he turned 4, he got a mini-classical guitar for his birthday and I set out to teach him a few simple chords. He got frustrated quickly, and seemed more interested in simply holding the pick, strumming as loud as possible, and making up his own songs. Nowadays, I play that thing more than he does.

I may have jumped the gun a bit there, according to Dan Brockert, general manager at School of Rock in Overland Park, Kansas. Brockert’s school offers musical instruction on pretty much every instrument under the sun to kids aged 2 to 17.

“When you first start playing guitar, it hurts the fingertips, and it requires a lot of coordination to get your fingers into these awkward shapes,” Brockert said. “You have to have patience to some degree, and younger kids don’t typically have that. More times than not, I’ve seen kids age 5 or 6 try and play guitar, get discouraged and frustrated, and never want to play it again because they have a bad taste in their mouth. So I always try and steer people away from guitar until age 8.”

Summer camps are also a great introduction to music for kids. And kckidsfun.com has put together a fairly comprehensive list of upcoming area camps – many of which include beginning instruction to music. 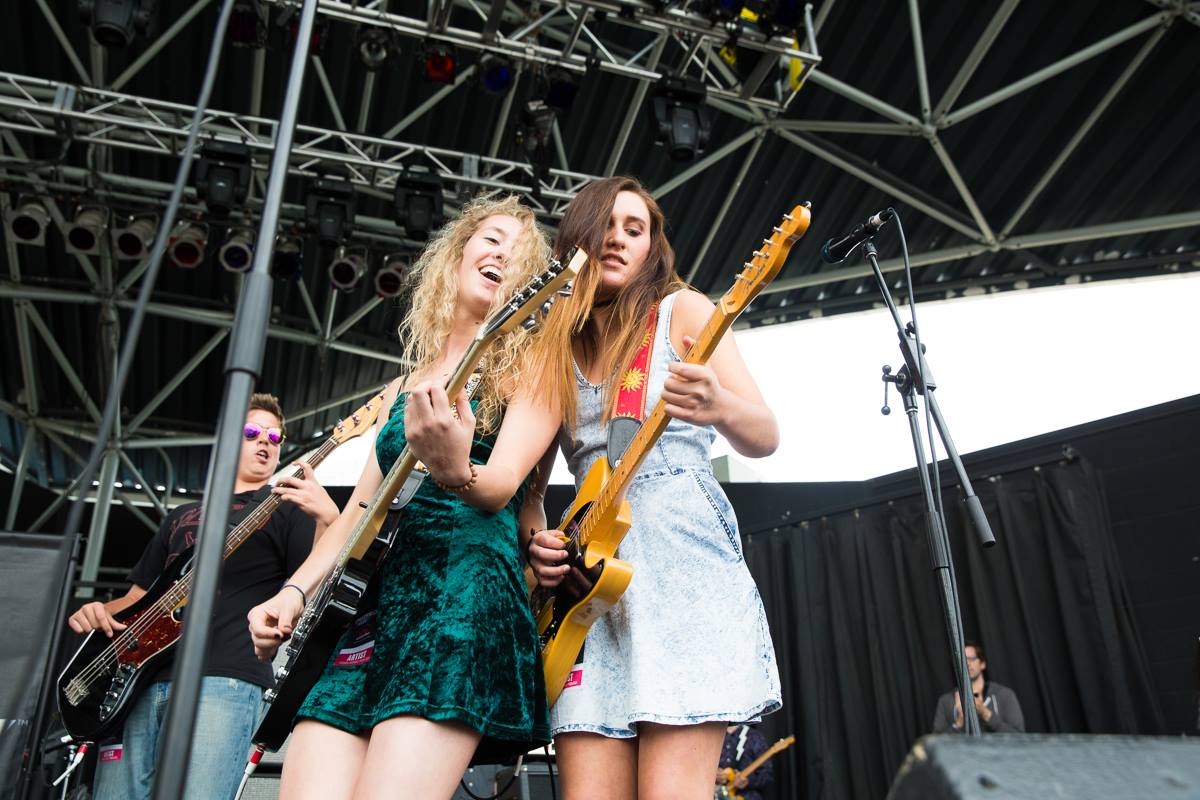 You know what doesn’t require a lot of coordination? Sifting through record bins. Cole Maggart, who co-owns Brothers Music in Mission, Kansas, says he sees a lot of parents bring young kids into his shop – which gives him an opportunity to watch them discover a love for music right at the shop’s listening station turntable.

“That’s kind of a natural draw for the youngsters. It’s very mechanical so kids want to play with it and see what it does,” Maggart said. “I think parents like the idea that they can trick kids into hearing old music just because of the process of putting a record on, putting the headphones on and hearing the sound come through. It’s pretty amazing to see the process happen with a kid the same way it happens to all of us.”

My first trip to Brothers with my son was a bit different. On the pros side, he picked out a great record (“The Best and the Rest of the Zombies”). On the cons side, it took him more than an hour to pick one out and choosing a record was stressful for him. He hasn’t really been interested in going back since.

In the end, I owe my son’s appreciation of music to the blockbuster film Marvel’s “Guardians of the Galaxy”.

In the film, Peter Quill, leader of the Guardians, is an Earth-born, interstellar smuggler who was taken from his home planet as a child in the ’80s while carrying only his Walkman and a backpack. And music is a big part of the film, with a quirky mix of rock and R&B hits of the ’60s and ’70s supplied by the mixtape cassette Quill has been carrying around since his childhood abduction.

My son saw Quill, played by Chris Pratt, dancing around the screen with headphones on and asked if I could get him a cassette Walkman for his birthday. After maniacally scoffing at the old tech for five minutes, I found enough breath to calmly explain to the boy that the old iPhone he had been using to take distorted photos of his feet and play Angry Birds on could be used as a pipeline to an expansive history of music. His eyes bulged at the news. All he needed was a pair of headphones and he was off.

So far, his downloads have led to some moments of extreme pride (Radiohead, Gorillaz) and some involuntary shudders (Katy Perry, Twenty One Pilots). He listens to the tracks around the house bobbing his head, dancing, and inadvertently screaming at us to talk over the music only he can hear.

And just like that, in a rather anticlimactic manner, he can’t get enough.

At first, I got pretty heated about the fact that I had spent so much time actively trying to get him excited about music, only to be unexpectedly bumped aside right at the finish line. But, after thinking about it, I realized that I was probably the impediment all along.

Trying to get my son to love music was effectively me trying to get him to love my thing. It was rooted in good intentions, but it was still somewhat selfish. Seeing a third party independently enjoy music somehow made it click in his brain that he could do the same. And in the end, it was realizing that outlet on his own, under his own terms, that brought it home. And now, he’s made it his thing.

And because my son and I now get to share one of my greatest passions, I’m willing to accept it how it comes, even if it means playing second fiddle to his surrogate father — Chris Pratt pretending to be a nonexistent Marvel character a galaxy away.