Sympathetic Vibrations | Nice To Meet You 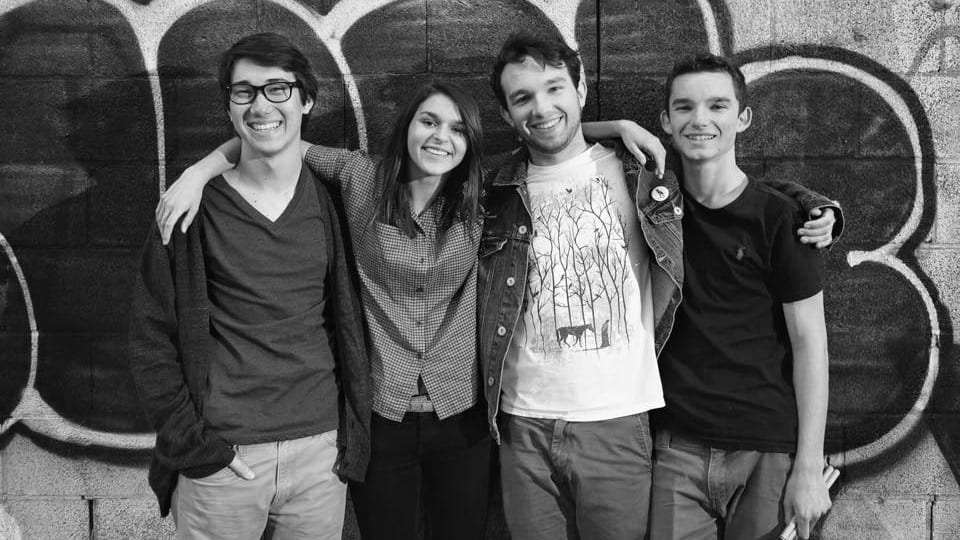 What were you doing when you were 16 years old?

If you were like me, you were insecure, acne-ridden, and mostly consumed with keeping teachers and parents off your back long enough to make it to the weekend. You had no idea what you wanted to do with your life and you planned on kicking that can down the road for the foreseeable future.

For The Greeting Committee — one of Kansas City’s youngest and perhaps most promising new bands — their teenage years will be spent crushing that can. The group is nurturing a growing national fan base, inked a major-label-backed record deal, and re-released an EP last month, despite the fact that only one of its four members can legally vote.

The band formed in 2014, when lead singer/guitarist Addie Sartino, now 17, decided to explore the sound of a full band after performing as a solo ukulele artist. During her recruiting efforts, a mutual friend introduced her to guitarist Brandon Yangmi, 16, who wasted little time closing the circuit with fellow marching and jazz bandmates drummer Austin Fraser, 17, and bassist Pierce Turcotte, 18.

When they first began rehearsing and playing live, all four members and their producer/manager, Peyton Marek, were students at Blue Valley High School. Turcotte is now in college, and the others are high school upperclassmen.

“We just put couches around the drum set, put everyone in different corners of the basement, and then just did one take for each song.” Yangmi said.

The result was their debut EP, It’s Not All That Bad, which was self-released last March. The five-track EP is mostly indie-pop tracks with some light breezes of punk and noise, and effortlessly floats from alt rockers to ballads to dance tracks. Sartino’s vocals are remarkable, and certainly more mature than her age would suggest – delivered with a breathy undertone more akin to lady crooners during golden age of jazz than her alt rock contemporaries.

The band says it owes much of its current notoriety to Lazlo from 96.5 the Buzz, who played “Hands Down”, the single from their EP, on Friday Mail — a segment aimed at giving local bands airplay on the station. The track was an instant local hit and quickly made its way across the country.

It wasn’t long before the major labels came calling, including Republic Records, Atlantic Records, Columbia Records, and even Def Jam. In the end the band inked a deal this summer with Harvest Records, part of Capitol Music Group, relying mostly on their instincts in making the decision.

“I think it just felt like the best fit out of all the meetings.” Sartino said. “Because when you’re 16,17 (years old) sitting in a meeting with business people it’s awkward and uncomfortable and it’s like, ‘Who feels the most down to earth?’”

Harvest had the band re-record their debut EP, had it mixed and mastered by a professional producer, and re-released it on iTunes on October 23. And, despite having label backing this time around, the band chose to head back into the basement for the re-recording.

When they talk about the whirlwind they have enjoyed since both the release of their debut EP and signing a record deal in comically quick fashion, they brim with humbled excitement. It’s all big smiles and genuine incredulity.

“We’ve only been a band for a little over a year. And how much growth that has happened during that year is bizarre.” Sartino said.

That youthful excitement could be mistaken for naiveté if it weren’t accompanied by a lazer-sharp focus about who they are now, where they want to be in the next year, and exactly how they plan to grow as a band.

They are in the process of writing songs for a full-length album that they hope to begin recording soon, but have pumped their brakes on local shows for now. The Greeting Committee will end the year strong with a spot on 96.5 the Buzz’s The Night the Buzz Stole XXXXMas show on Thursday, December 17, at the Midland.

All four band members and manager plan to hit the ground running in 2016 with a tour that will take them away from home – where almost all of their live shows have been up to this point.

“What I want to see is that we’ll go and we’ll do this [tour] and we’ll come back to Kansas City and people won’t even recognize us because of how much better we’ve gotten.” Sartino said.

How are high school students going to navigate a mid-school-year tour and the accompanying minefield of expectations from parents and school administrators? Well, fairly easily it seems.

“Our counselor said, ‘You guys need to focus on what’s important…’ And we were like, ‘Oh god, here it comes,’ Sartino said.

Luckily, the counselor agreed that thing was music. Their school will accept credits from an online program if needed while gone.

The tour will give the band an opportunity to get in front of its larger fan base, which includes the rest of the Midwest and the coasts. And they see touring as an integral part of their evolution – something they learned while on a three-stop stint opening for Los Angeles indie-poppers Saint Motel last month. Sartino called the experience of playing in front of new crowds “re-motivating”.

But when it comes to growing its fan base, the band was quick to emphasize quality over quantity.