How The Royals Can Get Right 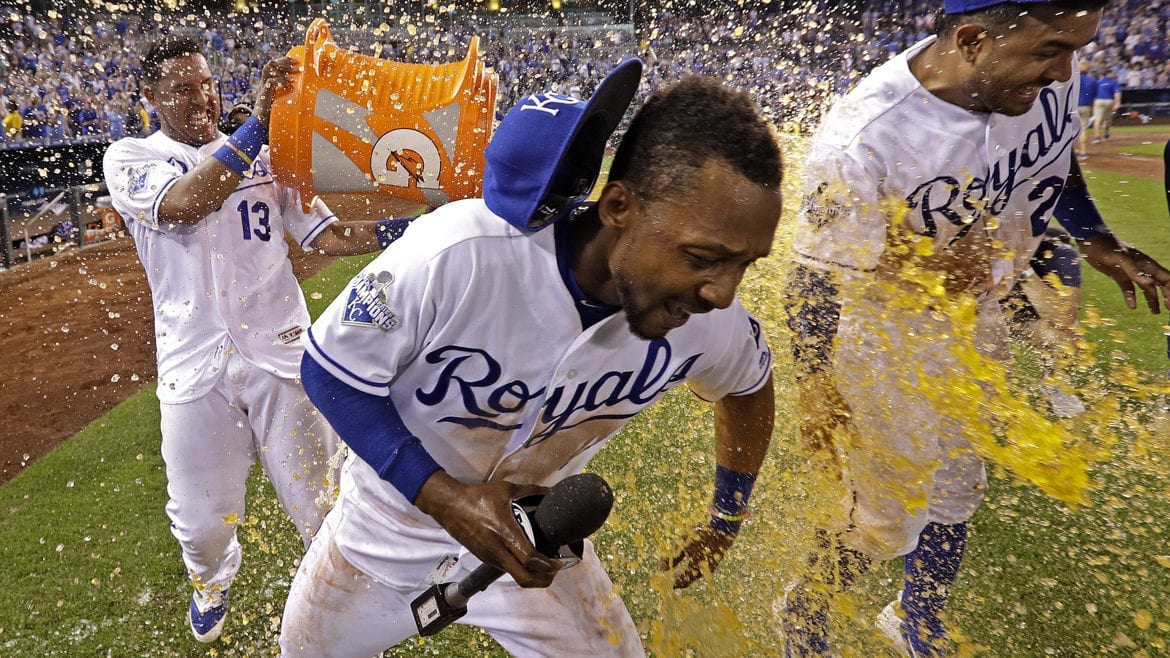 The Royals finished the first half of the season right around .500. At times, like last night against Cleveland, the club has looked like the world-beaters they were last year. At times, they’ve looked exactly as average as that record would suggest. There are a few very obvious things the club can do to get back on track. Just because they are obvious, though, that doesn’t make them easy.

Like, for instance, playing better away from home. On the year, the team is just 17-32 away from the Magic Kingdom. That won’t do it.

Why the road woes? It’s hard to say. But, psychologically speaking, this club is in all-new territory. Long gone are the days when the team could stealthily slip into town and surprise other clubs with their relentlessly scrappy style. The Royals now travel with that proverbial target on their collective back.

Maybe they should bring back Raul Ibanez. In 2014, the veteran famously gave a fiery speech to a then-hungry club, telling them how other teams hated to face them. Ibanez is retired now, but could return for another speech, this time on how defending a title is even harder than winning one.

Barring that, your guess is as good as mine. Maybe the team should stay in different hotels when they travel, or change their pre-game meals. Maybe they should bring Sluggerrr or Dave Webster on the road. Just don’t sacrifice a chicken to Jobu, a la “Major League.” Yan Gomes tried that on Saturday. On Sunday a shoulder injury knocked him out of the game.

Road or home, the team also has to pitch better. First, there’s that thing where Joakim Soria keeps blowing saves. It would be really cool if he would, you know, stop doing that.

Beyond that, with Chris Young finally sent to the bullpen, the club badly needs a fifth starter. Dillon Gee and Brian Flynn are the most likely in-house candidates to replace Young, but the team is also looking to make a trade. Right now, the top candidates seem to be former Royals Ervin Santana and Jorge De La Rosa along with Jeremy Hellickson, Andrew Cashner and Rich Hill.

Next, the club has to improve on offense. The Royals are near the bottom at the AL in runs scored, ahead of only Tampa. That won’t work.

Obviously, getting Alex Gordon hot would help. The Royals paid big dollars in the off-season to keep Gordon a Royal for life. Midway through the first year of that four-year deal, he’s been hovering around the Mendoza Line.

Plate discipline is another issue. A key aspect of this club’s style is relentlessness at the plate. These Royals have been taking too many big swings at too many bad pitches.

But the biggest contributor to the team’s lack of pop has unquestionably been the injuries. No, it’s not your imagination. For the past few seasons, the Royals have been remarkably healthy. This year, in what statisticians would call “a regression to the mean,” and what fans would call a stone cold bummer, the club has had a bad case of the injury flu. Stars like Gordon, Lorenzo Cain, Salvador Perez and Mike Moustakas have been, or currently are, on the 2016 disabled list.

It’s been ugly. In May, a single collision on a lousy pop foul cost the club two All-Stars; Gordon for a month and Moustakas for the season. Just days later, another crash between Cheslor Cuthbert and Perez sent Salvy to the bench. So, you know, if they could stop running into each other, that would be helpful.

They also need to party less. Granted, that’s not the sort of thing sports columnists usually write, but it might be true nevertheless.

Given that professional baseball players make a living by being in peak physical condition, you might think that they only eat healthy food, stay home every night, and always get to bed early. They do not.

Big league ballplayers are extremely privileged, often wealthy young men who virtually bristle with life and testosterone. Being members of the champion Royals, they are also worshiped as young gods throughout the metroplex. The temptation to enjoy a little nightlife has be immense.

They should resist. In a world as competitive as Major League Baseball, even the most minuscule of changes can make all the difference. Over the long haul, a player who never drinks and always gets eight hours of sleep is probably going to play better and be more durable than a guy who, say emulates Doc and Dwight.

Therefore, every fan reading these words can play a part in getting the team back on track for the second half. If you, dear reader, happen to see a Royals player out on the town, partying the night away, do not graciously offer to buy him a drink. Tell him to go home and get some sleep.

Hampton Stevens covers entertainment and the arts for local and national publications. He lives in Kansas City, Missouri.