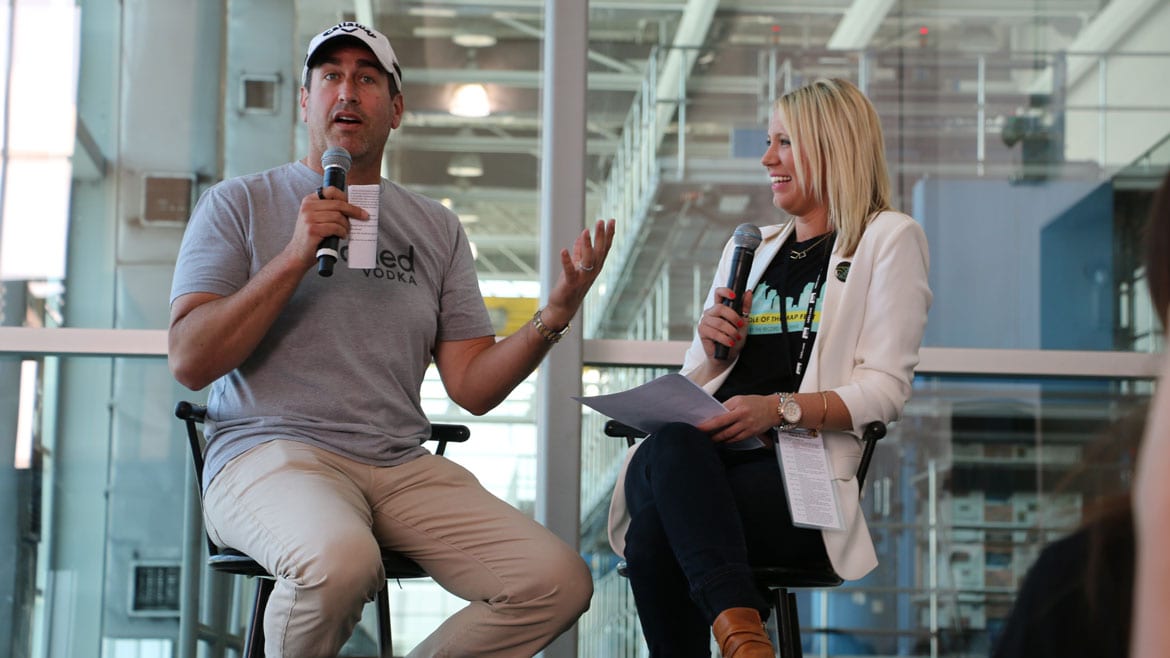 America may know comedian and actor Rob Riggle from his work on “Saturday Night Live” and “The Daily Show” or from roles in movies like “The Hangover” and “21 Jump Street.” But Kansas City knows Riggle from Big Slick, his celebrity-packed weekend fundraiser for Children’s Mercy Hospital.

Riggle spoke yesterday at Middle of the Map Forum, a yearly event sponsored by Ink magazine, about the evolution of Big Slick as the event approaches its sixth year. The Shawnee Mission South graduate answered questions about the fundraiser to a packed room in the Kansas City Star Press Pavilion.

Riggle said he has attended a lot of fundraising events and even hosted a few, but he had never seen an event that worked the way he wanted it to. He talked about hosting a Children’s Mercy event pre-Big Slick.

Instead of waiting around for a fundraising event that was a better fit, Riggle created one. He recruited fellow actors and KC-area natives Paul Rudd and Jason Sudeikis, and they hosted Big Slick year one in 2010.

Originally, the event was a celebrity poker tournament at the Voodoo Lounge in Harrah’s Casino. Over the years, Big Slick has evolved into a two-day event. This year, the fundraiser includes a celebrity softball game on the field at Kauffman Stadium, bowling at Pinstripes in Overland Park and a performance and auction at the Midland.

Riggle said the event grew organically, as did the money raised — from $100,000 the first year to $1 million last year, year five. He said the slow growth was intentional.

“It was something I learned in the Marine Corps,” he said. “Whenever we started something new, whenever we did anything, we always crawl, walk, run. You start with an idea, and you build it slowly and you learn from your mistakes and then you take it up a notch…. You just keep ramping up.

“It’s a natural learning curve, is what it is,” he continued. “It’s the model that we’ve started with at Big Slick, and it’s the one that’s kind of kept us going in a really positive direction. I don’t think we’ve done the Big Slick the same way twice, so it’s always innovating, we’re always figuring out what we did right and what we did wrong, how to plug the gaps.”

The Big Slick innovation also has to happen on a smaller scale because of the nature of the event — there’s no official Big Slick staff, Riggle said. He said all of the work is done by the family and friends of Riggle, Rudd and Sudeikis. In recent years, actors Eric Stonestreet and David Koechner have also been added to the host roster.

“Basically, if I meet you, you’re getting invited if you’re a celebrity,” Riggle said. “I did a talk show with Michael Buble a year ago, and I’ve been on his jock ever since.”

This year’s Big Slick is June 19–20. Guests have not yet been announced, but Riggle said seven have committed so far.

Riggle said he’s working on recruiting Adam Levine, lead singer of Maroon 5 and coach on “The Voice,” to attend this summer. And, in response to an audience question, Riggle said he’d love to get Jon Stewart: “If you think we’re not going to ask (him), you’re crazy.”

The celeb Riggle seemed most proud of recruiting was Will Ferrell in year one. The actors were working on a movie together, and Riggle said he finally worked up the nerve to ask Ferrell to attend over a late night poker game. Ferrell immediately said yes.

“He came to the first year,” Riggle said. “I think that really kind of helps because then, as a calling card, when I would approach other people, I could say ‘Hey, I do this thing with Paul Rudd and Jason Sudeikis back in Kansas City. It’s really cool. Yeah, like Will Ferrell comes.’”

While there is obviously a lot of emphasis on the celebrity guests, Riggle said the weekend is always all about the doctors, nurses and patients at Children’s Mercy. Every dollar raised by Big Slick goes to the hospital’s oncology department.

Riggle credits corporate sponsorships, like one with the Royals, with allowing Big Slick to be as successful as it is. Another audience question asked how another KC event could emulate the incredible success of Big Slick.

“I’m not going to lie, the celebrity stuff helps,” Riggle said. “But, what we did, even with celebrity, we still had to call in favors and find ways to make it important to people…. It’s barter and trade and negotiation. Don’t think about yourself, think about how what you’re doing is going to benefit (the sponsor).

“If you don’t have celebrities at your disposal, find some people who are of the same mind who want to create the same thing,” he continued. “Let other people know how it’s going to benefit them, and — chances are — people will start coming to you like a moth to a flame.”